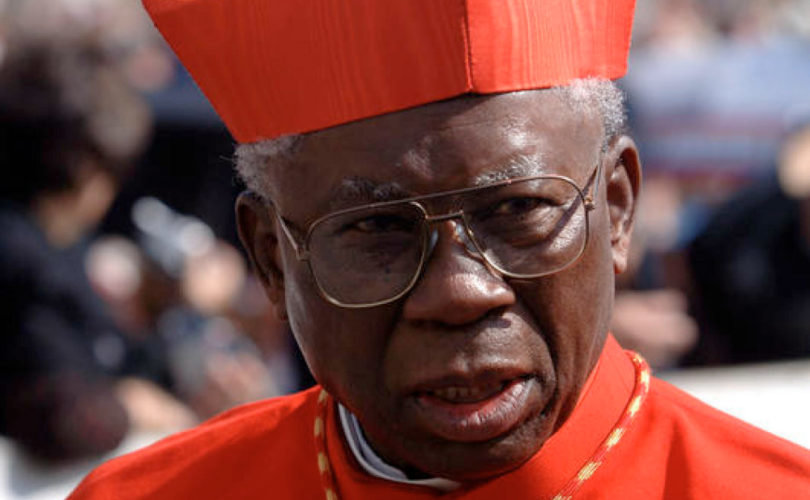 Cardinal Francis Arinze, prefect emeritus of the Congregation for Divine Worship and the Discipline of the Sacraments

ROME, October 19, 2015 (LifeSiteNews) — People living in an objectively sinful situation whose conscience indicates to them that they are able to receive Holy Communion are “responsible” for an “erroneous conscience” and need help to “realize their condition,” stated Cardinal Francis Arinze of Nigeria in an exclusive interview with LifeSiteNews.

Arinze, who is the prefect emeritus of the Congregation for Divine Worship and the Discipline of the Sacraments, was reacting to an argument made last week by a Synod Father that the divorced and remarried, and even homosexual couples, should be permitted to receive Holy Communion, if they have “come to a decision” to do so “in good conscience.”

Arinze said that one’s conscience must to be trained in the ways of the Lord to make correct judgements.

Arinze went on to quote portions from the Catechism of the Catholic Church (CCC) that deals with conscience and to provide commentary on what the passages mean.

CCC Paragraph 1790: “A human being must always obey the certain judgment of his conscience. If he were deliberately to act against it, he would condemn himself. Yet it can happen that moral conscience remains in ignorance and makes erroneous judgments about acts to be performed or already committed.”

Arinze: “Which means, conscience does not make objective right and wrong, but only directs the person in what the person should do or not do. That conscience has to be educated, trained, if you wish,” he said.

CCC Paragraph 1791: “This ignorance can often be imputed to personal responsibility. This is the case when a man ‘takes little trouble to find out what is true and good, or when conscience is by degrees almost blinded through the habit of committing sin.’ In such cases, the person is culpable for the evil he commits.”

Arinze: “That means it isn't enough that conscience says, ‘I can do this’ if that conscience has been made blind by repeated acts that are evil. Then the person is responsible for that erroneous conscience. That is also clear,” he said.

CCC Paragraph 1792: “Ignorance of Christ and his Gospel, bad example given by others, enslavement to one's passions, assertion of a mistaken notion of autonomy of conscience, rejection of the Church's authority and her teaching, lack of conversion and of charity: these can be at the source of errors of judgment in moral conduct.”

Arinze said that there are “objective norms of right and wrong,” no matter what the personal conscience may dictate to an individual.

“Suppose I say in my conscience, ‘I follow what conscience says.’ And I see that car and I'd like it. And my conscience tells me it would be nice for me to take that car. And I go and take it. Or, I go to the bank and take a big swipe of money. Is it enough that I say, ‘My conscience is right, it didn't blame me?’”

“The police would not be amused and the judge would clap you in prison, you and your conscience. You see? Conscience has to be educated. The objective norm of right and wrong is God's eternal wisdom, inserted in human nature, which we call natural law,” he said.

When asked what a minister of the sacrament of Holy Communion should do when approached by people living in an objectively sinful situation who say they feel right in their consciences to approach the sacrament, Arinze responded that such people need help to “realize their condition.”

“There is such a thing as objective evil and objective good. Christ said he who [divorces his wife] and marries another, Christ has one word for that action, ‘adultery.’ That's not my word. It is Christ's word himself, who is humble and meek in heart, who is eternal truth. So, he knows what he's saying.”

“Now, the best way we can help a person is with truth. So, it will be necessary in some charitable way, nice way, to help such people to realize their condition. It is not enough to leave them with their conscience,” he said.

The cardinal used the analogy of a medical doctor aiding a wounded patient to make his point.

“A good doctor who receives a patient with a big wound, a sore, knows what is to be done. Maybe clean some parts. Maybe some injections. Maybe medicines are to be administered.”

“But if the doctor says, ‘the patient says he doesn't like these measures, he's happier with a bandage’ and gets a nice bandage and bandages the wound, is he a good doctor? Does the wound get healed because the patient's conscience tells him that this is the nicest way to approach it?

“You see, reality does not respect what [a person and his conscience] thinks. So the doctor should treat that wound with the best medical science.”

“That's the way the doctor will show mercy to the patient,” he said.