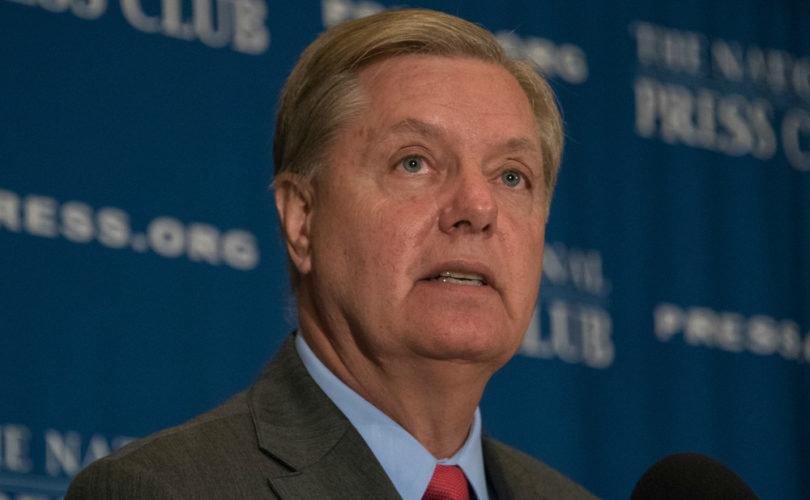 According to The Hill, Graham told the Republican Jewish Coalition that “Ted Cruz doesn't have an exception for rape and incest,” and thus would lose to the Democratic nominee next year.

Graham, who has twice introduced a bill to ban most abortions after 20 weeks' gestation, asked the donors and others in attendance if they support abortion's legality if a woman was raped, something The Hill reports drew cheers.

According to Graham, a Cruz nomination would be “about the nominee of the Republican Party” ordering raped women to keep the rapist’s child.

“You can be pro-life and win an election, but if you’re going to tell a woman who’s been raped she has to carry the child of the rapist, you’re losing most Americans,” he said.

Graham's comments to the  Republican Jewish Coalition – an organization which officially takes a neutral stance on abortion and marriage, though some of its leaders are pro-abortion – were harshly criticized by pro-life attorney and advocate Rebecca Kiessling on both moral and strategic grounds.

“The pro-life, no exceptions, no compromise strategy matters because innocent children like me who were conceived in rape are being punished from the crimes of our biological fathers,” said the president of Save the 1. “When you protect mediocre politicians like Sen. Graham, instead of innocent babies, you get nothing accomplished. Men like him are not interested in ending legalized abortion, but have difficulty even doing the bare minimum to protect any.”

Kiessling also said being consistently pro-life “is not a losing strategy. Some politicians had difficulty in the past because they repeated poor words from leaders within the pro-life movement.”

“When I changed the heart of Gov. Rick Perry and Newt Gingrich during their presidential campaigns four years ago, they weren't lambasted,” she continued. “Perry shared his conversation with me on national news, saying that my story pierced his heart, and he could not look me in the eyes and justify the rape exception any longer. The liberal media left him alone because there was a real woman behind the story and they don't want to put a face to the issue, humanizing those like me who were conceived in rape.”

“Sen. Cruz understands that you punish rapists, not babies,” said Kiessling. Her home state of Michigan, she said, has “passed some of the best pro-life laws in the nation, while never having a rape exception in a single bill. According to the National Women's Law Center, at the state level, of 298 pro-life bills introduced and 27 enacted in the first half of 2013 had no rape exceptions. That's 86% of pro-life bills introduced and 71% of those enacted.”

Earlier this year, Graham told reporters, “I yearn for an America that cares about people at all phases of life.” However, he also told LifeSiteNews shortly after introducing the 20-week ban that “everything's a balancing test. A balancing of interests. In a situation of rape, I'm going to leave that to the family, to the mother.”