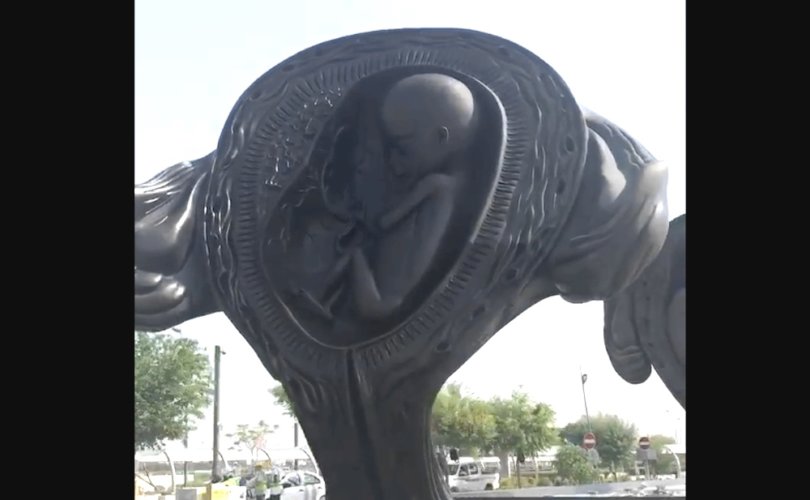 DOHA, Qatar, October 30, 2018 (LifeSiteNews) – A new video uploaded to social media captures the impact of one of the world’s most unique displays of prenatal life.

LifeSiteNews first covered the unveiling of “The Miraculous Journey,” a display by British artist Damien Hirst, in 2013. It’s a set of 14 massive statues of pre-born babies in multiple stages of prenatal development, erected outside Sidra Medical and Research Center in Qatar.

Recently, Weill Cornell Medicine professor Joseph Shumway shared a Facebook video of the freshly-polished sculptures, following them from the earliest cell division, to embryonic humans gradually taking more recognizable shapes, to obvious babies sleeping in the womb, to birth. By following the steady progression from one stage to the next, the video demonstrates the display’s impact more vividly than previous still images have.

The statues – which range from five to 11 meters high and weigh a combined 216 metric tons – were originally commissioned as “a celebration of life,” and dedicated to “the people of Qatar,” the Qatar Museums Authority (QMA) explained at the time.

“There is a verse in the Koran about the miracle of birth. It is not against our culture or our religion,” QMA chairwoman Sheikha al Mayassa Hamad bin Khalifa al-Thani said in response to concerns the display might have conflicted with Islam’s strict standards of public modesty.

Hirst is most well known for much more provocative fare, such as a shark preserved in formaldehyde, a diamond-studded human skull, and rotting animals. But this piece was, “in a very important sense, just as transgressive,” Eric Metaxas noted. “So transgressive that art critics, many of whom praised Hirst’s earlier works, don’t know what to make of it.”

“I have no idea what Hirst’s views on abortion might be, but it’s difficult to imagine any work of art cutting across the grain of the ‘culture of death’ more sharply than this one,” he continued. “Even the title, ‘The Miraculous Journey’ affirms the idea that life is a gift and, as such, should be treasured.”

Modern biology determines whether something is alive or dead, human or animal, and an organism or mere organic matter based on broadly-accepted criteria. Many mainstream, respected medical and scientific textbooks agree – and several abortionists and pro-abortion leaders have admitted – that a whole, distinct, living human being is present once fertilization has completed.