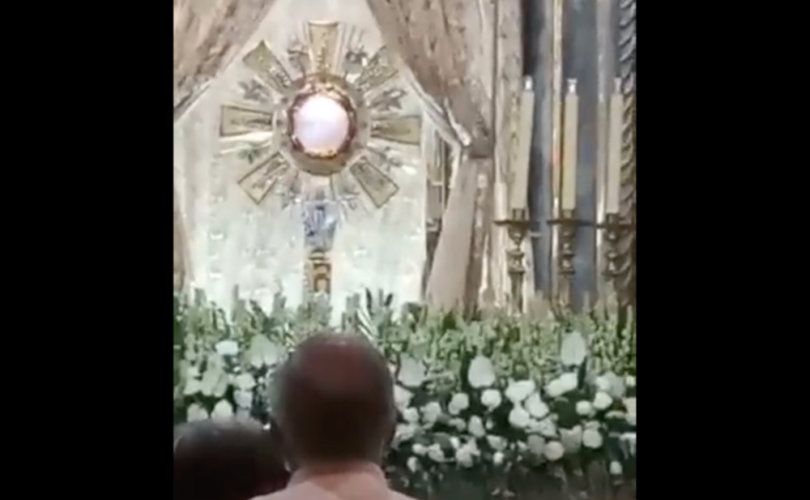 On July 22, 2022, a video was recorded at Our Lady of the Rosary parish in the city of Zapotlanejo, near Guadalajara, Mexico. The video shows a consecrated host in a monstrance that appears to be pulsating with the beat of a human heart.

Argentine priest Father Carlos Spahn, founder and superior of the Religious Family of the Immaculate Heart and Divine Mercy, was preaching at the parish and had just exposed the Blessed Sacrament for the adoration of the faithful.

Speaking to ACI Prensa, CNA’s Spanish-language sister news agency, Fr. Spahn explained that the occurrence took place during Adoration right after he had offered Mass. “We exposed the Blessed Sacrament; I said the prayers for the exposition, and when I got up to go to the sacristy, this began to happen.”

“Some people saw it,” he continued. They “couldn’t believe what they were seeing, and we have at least two pieces of footage,” he said. These videos were taken by “people who quickly took out their cell phones, filmed it,” who immediately gave the footage to the priest “so they won’t alter it or anything.”

“So I attest that this is authentic, from the exact moment,” Spahn declared.

Offering “a personal interpretation,” of the pulsing host, Fr. Spahn said it reveals “the heart of Christ, which beats with love for men,” and which, he lamented, “is so outraged, so abandoned, so despised … that sometimes we don’t treat it as we should, with greater care, with more faith, with more dedication.”

Cautioning against any official stance on the occurrence prior to a judgment by the Church, Spahn clarified, “I’m not saying it’s a miracle officially, because I don’t have the authorization to do it.”

After the occurrence, the priest had to quickly move on to another diocese where he was also scheduled to preach. The matter was therefore left to the local pastor to submit to the diocese for examination.

Spahn explained right after leaving, “[t]he archdiocese hasn’t been consulted about it because we were just passing through; now I’m in another diocese preaching.” However, he said the local priest would be able to find “people to sign and give testimony of what they saw, and this documentation can be sent to the appropriate person.”