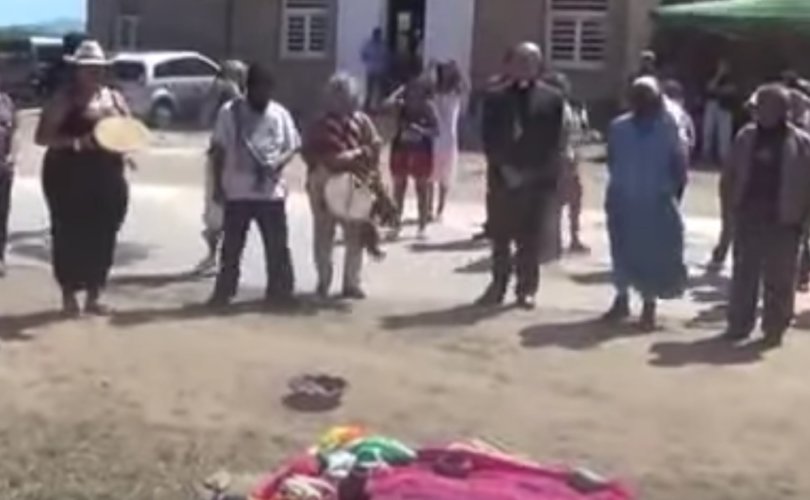 Cardinal Gianfranco Ravasi of the Pontifical Council for Culture was filmed walking around a blanket as part of a noisy procession honoring Pachamama, a fertility goddess, and Tata Inti, Father Sun, in the so-called “hippy town” of San Marcos Sierras in the Cordoba province of Argentina. During the ceremony, a shaman describes what is on the blanket.

The speaker is clear that at least some people taking part in the ritual have invoked pagan gods.

“Therefore, with my brothers and sisters, we have begun this encounter,” the shaman says.

A spokesman for Cardinal Ravasi told LifeSiteNews via email that the video shows an event sponsored by a Vatican department responsible for interfaith dialogue.

“The event reported in the video happened as part of a Courtyard of the Gentiles – the Department of the Pontifical Council of Culture responsible for the dialogue with non-believers – event, which focused on folkloric and cultural traditions of the indigenous peoples of Argentina and Paraguay,” the Pontifical Council of Culture office explained by email.

The office further explained that the event, which took place at in 2015, “involved the participation of scholars of ethnography, theologians and representatives of the local communities and the local Church as well as social activists and local missionaries.”

According to his spokesman, Cardinal Ravasi had visited various centers that provide important social and economic support to the poor as well as ensuring the evangelization of the area.

“The ritual featured in the video was a cultural performance and was only one of many events and performances included in the event. The ritual was not celebrated as an explicitly religious ceremony, in so far as the nature of the event has to be considered folkloric and cultural,” the spokesman said.

During the ceremony the shaman, for whom Spanish is clearly a second language, sometimes spoke in an indigenous tongue, to which he referred in the first remarks captured by the video.

“I [spoke] in one of the languages that was present before 1492. Before the Church and the other culture arrived here. These languages were here….” he said.

“Our spirituality, our faith were here before they arrived.”

The speaker was clear that the ritual was religious in intention, saying, “This spiritual ceremony that we walk is a walk in a circle from which nothing escapes, where everything is contained, and with everything and everybody and everything around us.”

He continued: “We have asked Mother Earth to say that all of you are invited to this meeting. And we have listened and certainly because they want to hear our voice, who we are, how long we have been here, and what our spirituality is about.”

The shaman explained that the ritual was to bring positive energy before sitting down to dialogue.

“So, in every meeting and encounter in our communities we sit down at the table and we start to talk,” he said.

“But before then we must allow energy, positive energy, the energy that permits me to say, that everything that I say will be for the benefit of the other, [for] the benefit [of] the community,” he continued.

“This is our celebration. Therefore, we will now dialogue, where will be conversing with everyone, and sharing our experience, our life.”

A Dominican theologian who does not have the permission of his superiors to be mentioned by name told LifeSiteNews that the rite was superstitious and therefore unlawful.

“… It's not totally clear what its purpose is,” the theologian said.

It “seems to come under that species of superstition which St. Thomas [Aquinas] calls 'superstitious observance,'” he continued.

The theologian explained that Aquinas distinguishes superstitious observance from idolatry,  “another species of superstition,” because the point of the observance is not to worship a creature, “even though the creature is being treated in a way that only befits God,” but to get something done.

“But whatever species of superstition it is, since superstition of all kinds is a sin, it is wrong to take part in it,” the theologian added.

“To his credit the cardinal looks a bit uneasy when the shaman starts talking about asking permission from the sun to walk round the bowl of maize.”

Pachamama and concerns regarding the admixture of pagan beliefs to Catholicism in Latin America burst onto the world stage this October 4 when a missionary group from the Amazon held an unusual ceremony in the Vatican Gardens before Pope Francis. The group knelt in a circle around a blanket and prostrated themselves before a number of carvings, including two nearly identical wooden figures depicting a naked, pregnant woman. Pope Francis was offered a statue of the image, which he blessed.

After Vatican media officials denied that the statuettes represented the Blessed Virgin Mary, a volunteer at the church where the images were kept told LifeSiteNews that they represented Pachamama, “the mother, who cares for life, who gives nourishment to life.” A Carmelite sister later confirmed to LifeSiteNews that the image was “figure of life” and a symbol of “Mother Earth” and the “Pachamama.”

The reverence shown to “Pachamama” in the Vatican Gardens, in St. Peter’s Basilica, and the Church of Santa Maria in Traspontina where five copies of her image were kept during the Synod of Bishops for the Amazon, shocked many Catholics, including laypeople, priests, bishops and cardinals. On October 21, a young Austrian named Alexander Tschugguel and his friend took the Pachamama carvings out of the Catholic church and threw them into the Tiber.

Tshugguel was praised by Bishop Athanasius Schneider, Archbishop Carlo Maria Viganò, and Cardinal Raymond Burke. Burke expressed his respect and gratitude for the young man’s actions, saying that he could “understand why he found it intolerable that pagan idols be displayed in a Catholic church.” Pope Francis, however, apologized for the Pachamamas’ expulsion, to “the people who were offended by this act.” The pontiff said that the statuettes had been recovered from the Tiber and might be displayed in St. Peter’s Basilica during the final Mass of the Synod. Instead, an indigenous woman brought a pot of plants, reminiscent of a traditional offering to Pachamama, to Pope Francis during the Offertory. The pontiff asked his Master of Ceremonies to place the pot on the altar.