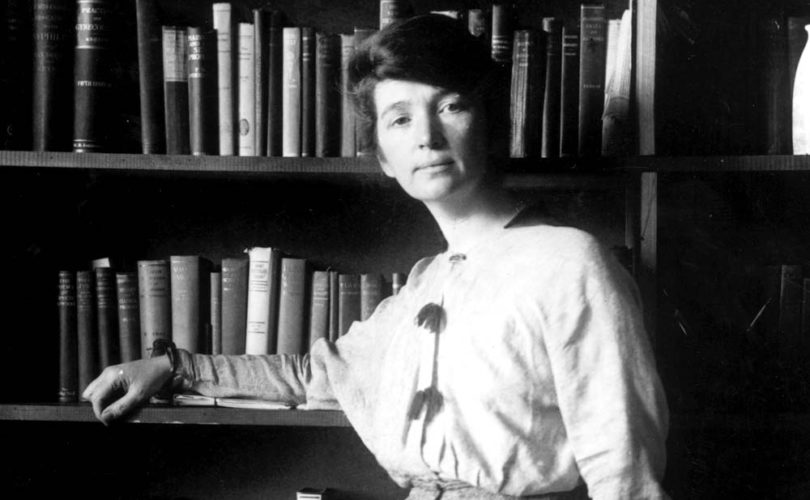 September 10, 2015 (LifeSiteNews) – The racist, eugenicist, anti-life founder of Planned Parenthood was also a rabid anti-Catholic, making outrageous statements against the Church, including that Catholics have “outbred the Protestants” and that they “have control.”

The quote comes from a video that was part of a pair of September 8 reports from CNSNews.com on the decades-long history of expressed loathing for the Church from the woman behind the abortion chain currently at the center of a grisly baby body part trafficking scandal.

Sanger, who lived from 1879 to 1966, often berated the Catholic Church in her writing and speeches, labeling it among the “arch-enemies to hinder the progress of enlightenment,” determined to destroy America's “liberties” and establish its own “rules & dominion.”

In 1960, when then Senator John F. Kennedy was close to being named the Democrat Party's nominee to run for president, Sanger said she would leave the country if Kennedy won, because he was Catholic.

Mrs. Sanger said she was opposed to Kennedy because of his religion.

“In my estimation a Roman Catholic is neither Democrat nor Republican.”

“Nor American, nor Chinese; he is a Roman Catholic,” Mrs. Sanger said.

Mrs. Sanger is here [Hawaii] on a vacation from her Tucson (Ariz.) home.

She told a reporter that a Roman Catholic at the head of the country would “make impossible America's most important contribution to world peace — the dissemination of birth control information.”

She is the founder and president emeritus of the Planned Parenthood federation.

Sanger also advocated for repressing the Church in the public square, saying in 1921 that it was acceptable for Catholics to keep their ideas in their church, but when they try “to make these ideas legislative acts and force their opinions and code of morals upon the Protestant members of this country, then we do consider this an interference with the principles of this Democracy and we have a right to protest.”

Sanger wrote in a 1932 essay titled “The Pope's Position on Birth Control,” “My own position is that the Catholic doctrine is illogical, not in accord with science, and definitely against social welfare and race improvement.”

“We should hire three or four colored ministers, preferably with social-service backgrounds, and with engaging personalities,” she wrote of reducing the number of African-Americans through contraception. “The most successful educational approach to the Negro is through a religious appeal. We don't want the word to go out that we want to exterminate the Negro population, and the minister is the man who can straighten out that idea if it ever occurs to any of their more rebellious members.”

Planned Parenthood has a disproportionate percentage of its facilities in minority neighborhoods.

Abortion zealots have maintained support for Planned Parenthood and its founder despite the organization's racist, eugenic, and anti-Catholic roots.

“I admire Margaret Sanger enormously, her courage, her tenacity, her vision,” she said. “I am really in awe of her.”

Contraception was one of the many reasons for which Sanger attacked the Church, and also what would ultimately give birth to Planned Parenthood.

The abortion behemoth committed almost 330,000 abortions in the U.S. in its latest reported year, and it took in nearly $530 million in “government health service grants and reimbursements” courtesy of the American taxpayer.

The exposure in recent weeks of Planned Parenthood executives bartering in fetal remains renewed calls for the abortion giant to be investigated and defunded, something the U.S. Senate failed to do last month.

Several states have acted to defund the abortion chain at the state level, drawing threats from the Obama administration.

The first of several hearings expected in Congress on Planned Parenthood and its federal funding was held Wednesday.