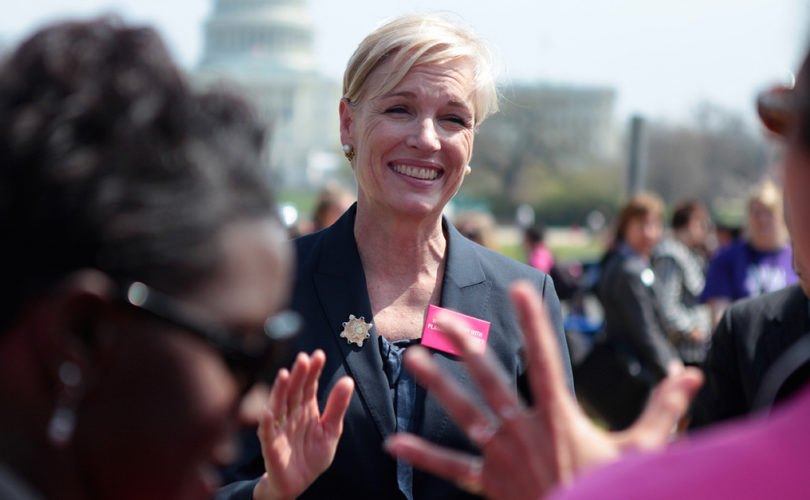 WASHINGTON, D.C., February 28, 2014 (LifeSiteNews.com) – Planned Parenthood President Cecile Richards told an interviewer on Thursday that “I don't know that it's really relevant” to consider when life begins when discussing abortion.

The abortion industry leader appeared on Fusion TV's America with Jorge Ramos before a backdrop featuring pictures of herself and Wendy Davis.

“This is a question that I think will be debated through the centuries,” she said.

“But for you, what's that point?” Ramos followed up.

“It is not something that I feel like is really part of this conversation,” she said, stuttering and clearly shaken. “I think every woman needs to make her own decision,” she finally said.

“But why would it be so controversial for you to say when do you think life starts?” Ramos pressed.

“I'm the mother of three children,” she finally said. “For me, life began when I delivered them,” adding that her children have “probably” been “the most important thing in my life ever since.”

Richards' refusal to answer the question echoes Barack Obama's 2008 reply to Rick Warren stating that determining the moment when life begins is “above my pay grade.” However, biologists and embryologists say the fact that life begins at conception is settled science.

“At the moment the sperm cell of the human male meets the ovum of the female and the union results in a fertilized ovum (zygote), a new life has begun,” according to the 1976 Van Nostrand's Scientific Encyclopedia. The 1993 book Before We Are Born: Essentials of Embryology and Birth Defects says fertilization “represents the beginning of a human being.” Numerous other textbooks reveal the same conclusion.

If life begins at conception, abortion is clearly the taking of a human life.

Richards instead told Ramos, “What we do at Planned Parenthood is make sure that women have all their options for health care. And that they have the option to have a healthy pregnancy, they have an option to put a child up for adoption if they decide to carry a pregnancy to term, or they have the right to make a decision to terminate a pregnancy.”

But critics say Richards is soft pedaling the real record of the nation's largest abortion provider. “In 2012, abortions made up 93.8 percent of Planned Parenthood’s pregnancy services,” the Susan B. Anthony List noted. Adoptions constituted one-sixth of one percent. Planned Parenthood performed 149 abortions for every adoption referral.