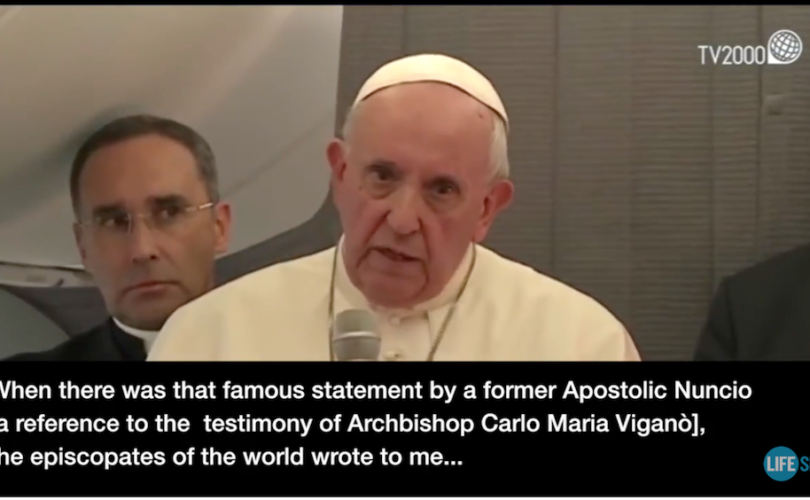 ROME, September 26, 2018 (LifeSiteNews) — Pope Francis has claimed to have received a “sign from God,” in response to Archbishop Carlo Maria Viganò’s extraordinary testimony implicating him and several high-ranking prelates in covering up the Theodore McCarrick abuse.

But some are suggesting that the only “sign” that has been given is that Pope Francis wants to “sweep the bombshell Viganó dossier completely under the carpet.”

In concluding remarks during a Q&A with journalists, on his return from the Baltic States last evening, the Pope said the divine “sign” came from two Chinese bishops — from the underground and patriotic churches — just before the Vatican signed a provisional agreement with the People’s Republic of China on the appointment of bishops.

The Pope was asked by a Spanish journalist if he would provide additional information about the content of the Vatican’s provisional agreement with China (the text of the agreement has not been released), and how he responds to Cardinal Zen’s accusation that he is “selling out” the Church to the Communist government in Beijing.

Pope Francis replied by describing the process by which the agreement was reached, and then praised several of the key negotiators for the Vatican, including Secretary of State, Cardinal Pietro Parolin, whom he lauded for his devotion to detail.

As to accusations of “selling out” the underground Church in China, Pope Francis offered this reply: “I think of the resistance, of the Catholics who have suffered: it’s true, they will suffer. There is always suffering in an agreement. But they have great faith and they write, they send messages, affirming that what the Holy See, what Peter says, is what Jesus says: that is, the ‘martyr’ faith of these people today continues on. They are great.”

Taking full responsibility for signing the agreement, the Pope said it was not “an improvisation” but “a journey.”

He then wrapped up his remarks with a curious reference to the extraordinary 11-page testimony of former U.S. Nuncio, Archbishop Carlo Maria Viganò. Seeming to treat the dossier more as an historical event than a current issue, he said:

“And then, a simple anecdote and a historical fact, two things before ending. When there was that famous statement by a former Apostolic Nuncio [a reference to the  testimony of Archbishop Carlo Maria Viganò], the episcopates of the world wrote to me saying that they felt close, that they were praying for me. The Chinese faithful wrote, and the signature on the letter was that of the bishop — so to speak — of the traditional Catholic Church and the bishop of the patriotic Church: together, both of them, and the faithful of both [Churches]. For me, this was a sign from God.”

While the bishops of Canada and New Zealand have come out in support of Pope Francis, dozens of cardinals and bishops from the U.S. and abroad have shown support for Archbishop Viganò, and have attested to his character and integrity.

Some prelates, including Cardinal Daniel DiNardo, President of the United States Conference of Catholic Bishops, have even called for an investigation into the allegations contained in the Viganò dossier. DiNardo’s proposed investigation, however, appears to have been put on hold after his recent meeting with Pope Francis.

Commenting on the Pope’s remarks, respected priest and theologican Fr. Brian Harrison, O.S. had this to say:

“In another plane interview (Sept. 25th), returning to Rome from his trip to the Baltic States, Pope Francis let slip another indication that he wants to sweep the bombshell Viganó dossier completely under the carpet.

Speaking of that document in the past tense as something now over and done with, Francis managed, within a very few words, to convey the impression that he has been an innocent victim enjoying total support and sympathy from all the world’s bishops in the face of an isolated accuser. (He conveniently omitted all mention of the dozens of cardinals and bishops who have now publicly called for transparency and a proper investigation of Archbishop Viganó's grave and all too credible allegations about corruption, homosexual predation and cover-ups reaching up to the very top of the Church.)”

It is also unclear, from the Pope’s words, exactly what the divine “sign” denotes. Were the joint signatures of the two Chinese bishops a “sign from God” that he did the right thing in signing the accord with China?

Pope Francis’ comments come one month after he was asked, during an inflight press conference on his return from Ireland, exactly when he learned of McCarrick’s history of homosexual abuse.

The Pope responded by telling journalists that he’s “not going to say a word” about the McCarrick cover-up.

Since then, however, in what have come to be known as his “Great Accuser” homily series, Pope Francis has compared Archbishop Viganò — and concerned lay faithful who question bishops — to Satan, saying the cries for justice and accountability come from a diabolical spirit. He has reportedly also compared himself to Jesus, the Good Shepherd who “chooses silence when the ‘Great Accuser’ accuses him ‘through so many people.’”

Italian and American journalists had reportedly been “poised” during last evening’s press conference to “return to issues dodged by the Pope” on previous occasions. They also reportedly intended to ask the Pope why he had not yet launched “a full-scale investigation into the McCarrick case, which the U.S. bishops’ conference had explicitly requested.”

Antonio Pelayo (Spanish agency “Vida Nueva”): Holy Father, three days ago an Agreement was signed between the Holy See and the Government of the People’s Republic of China. Can you give us any additional information about this, about its content? Because some Chinese Catholics, in particular Cardinal Zen, are accusing you of having “sold out” the Church to the Communist government in Beijing, after so many years of suffering. How do you respond to this accusation?

Pope Francis: This process has been going on for years, a dialogue between the Vatican Commission and the Chinese Commission, to sort out the appointment of bishops. The Vatican team has worked very much. I would like to mention a few names: Msgr. Celli, who patiently went, talked, came back… years, years! Then, Msgr. Rota Graziosi, a humble 72-year-old curia official who wanted to be a parish priest but remained in the Curia to help in this process. And then, the Secretary of State, Cardinal Parolin, who is a very devout man, but has a special devotion to the lens: he studies all the documents — periods, comma, and accents… And this gives me very great confidence. And this team, with these qualities, has moved forward. You all know that when a peace agreement or negotiation is made, both sides lose something, that’s the rule. Both sides. And they move forward. This is how the process went: two steps forward, one back, two steps forward, one back…; then months went by without speaking to each other, and then… These are the times of God, that resemble Chinese time: slowly… This is wisdom, the wisdom of the Chinese. The situations of the bishops who were in difficulty were studied case by case, and at the end the dossiers arrived on my desk and I was responsible for the signature, in the case of the bishops. As to the Agreement, the drafts passed by my desk, there was talk, I gave my ideas, the others discussed and they went forward.

I think of the resistance, of the Catholics who have suffered: it’s true, they will suffer. There is always suffering in an agreement. But they have great faith and write, they send messages, affirming that what the Holy See, what Peter says, is what Jesus says: that is, the “martyr” faith of these people today continues on. They are great. And I signed the Agreement, the Plenipotentiary Letters to sign that Agreement. I am responsible. The others, who I have appointed, have worked for more than ten years. It’s not an improvisation: it’s a journey, a real journey.

And then, a simple anecdote and a historical fact, two things before ending. When there was that famous statement by a former Apostolic Nuncio [a reference to the  testimony of Archbishop Carlo Maria Viganò], the episcopates of the world wrote to me saying that they felt close, that they were praying for me. The Chinese faithful wrote, and the signature on the letter was that of the bishop — so to speak — of the traditional Catholic Church and the bishop of the patriotic Church: together, both of them, and the faithful of both [Churches]. For me, this was a sign from God.

And the second thing: we forget that in Latin America — thanks be to God this has passed! — we forget that for 350 years the kings of Portugal and Spain were the ones who appointed bishops. And the Pope only gave jurisdiction. We forget the case of the Austro-Hungarian Empire: Maria Theresa got tired of signing the appointments of bishops, and gave jurisdiction to the Vatican. Other eras, thank God, that are not repeated! But the present case is not for the appointment: it is a dialogue on possible candidates. The thing is done in dialogue. But the nomination is from Rome; the nomination is by the Pope, this is clear. And let us pray for the sufferings of some who don’t understand or who have many years of clandestinity behind them.

Note: this article was updated at 3:p0 p.m Rome-time on September 27.