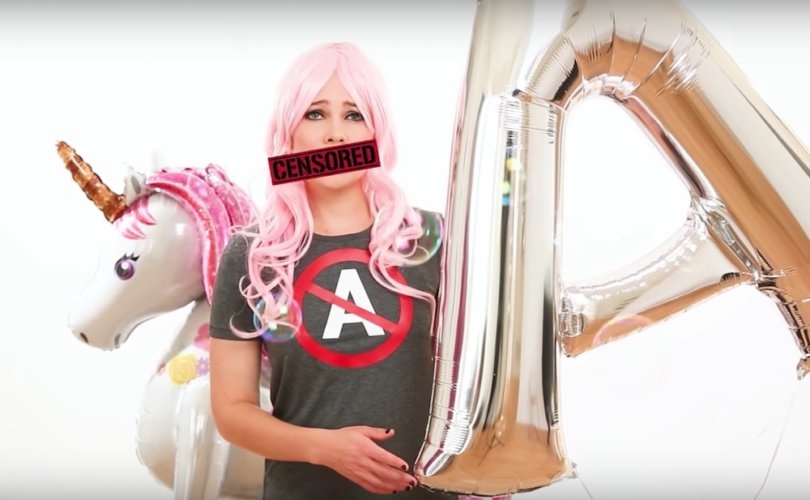 AJAX, Ontario, January 2, 2018 (LifeSiteNews) – The Ontario-based pro-life group Choice42 (Choice For Two) is back with the latest video in its popular “Just Saying” series, starting the new year by taking aim at the prevalence of euphemisms for the word “abortion.”

At the end of December the group teased it would be “starting 2019 with a BANG!” in an end-of-year message to supporters, and followed through on January 1 by releasing its newest video.

Sporting the now-iconic pink wig denoting her satirical portrayal of a pro-abortion feminist, Choice42 founder and director Laura Klassen advises readers that the “a-word” is “nasty” and to be avoided at all costs. Throughout the video, every utterance of the word “abortion” is censored.

“Seriously, there are so many words and phrases you can choose to avoid being offensive,” she says. “Why say [abortion] when you can say empowerment! Words like coercion, killing, regret are not helpful.”

“Stick to more uplifting terms, such as self-care, healthcare, repro rights, or my favorite, choice,” Klassen continues, cycling through a variety of costumes including Supergirl, a grim reaper, a nurse, and one in which she wears a “pussy hat” popularized by left-wing activists in recent years. “Brilliant, really, so simple and yet so void of anything truthful. Love it!”

Calling abortion “what it really is” is “just too much,” she concludes, because “nobody wants to think about that.”

“Like with our other videos, the purpose of ‘A-Word’ is to challenge the abortion status quo and hopefully get people thinking about this human genocide that is going on right here and now behind closed doors,” Klassen told Church Militant on Tuesday.

Though a relatively young organization, Choice42 quickly made an international name for itself with its “Just Saying” videos satirizing popular pro-abortion tropes. Previous entries mocked the notion that the “magical birth canal” automatically confers human rights on a preborn baby, and that men can’t discuss abortion because they can’t get pregnant.

In perhaps an even bigger testament to the group’s impact, however, it’s also had to ward off attempts by both Facebook and Twitter to label their content as “discrimination” and “hate speech.”

In addition to battling pro-abortion ideas with humor, Choice42 connects women to crisis pregnancy resources, and publishes more serious videos on topics such as the firsthand accounts of women who choose life in difficult circumstances.