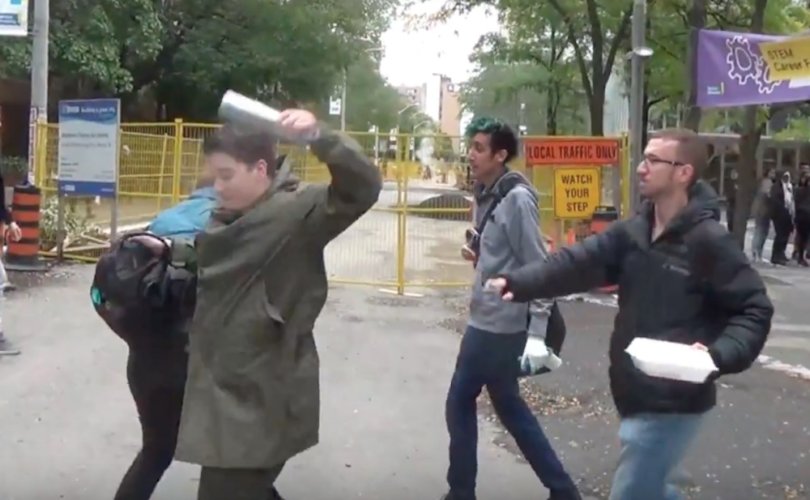 Skwarko can be seen approaching TAA founder Blaise Alleyne and member Katie Somers from behind, at which point Skwarko kicks and pushes Alleyne, swings and then throws a metal dolly cart, repeatedly pushes Somers, and attempts to tear a backpack from her back. She also takes an object from the backpack and throws it on the ground.

Another member of RRJC can be seen trying to block a camera filming the event. Much of the dialogue is inaudible, but Swarko can be heard belligerently challenging the pro-lifers. “C’mon, let’s go,” she says. “You filming me? Let’s do it.”

Somers reportedly suffered injuries including bruises to her leg, TAA added. Police and EMS were called to the scene and an investigation has been opened, but charges have yet to be filed.

“This is one of many incidents our Ryerson Team has had to endure over the past two years from the student unions and the Reproductive Justice Collective,” Alleyne said. However, he added, “Hearts and minds are being changed on abortion at Ryerson every week, and our team is growing. We will not be intimidated by violence.”

In her post on the attack, Somers explained that she would persist despite pro-abortion violence because of the impact she’s seen from dialogue with opponents – including a conversation with a formerly “pro-choice” young man on the very same day.

The attack follows a similar incident covered earlier this week by LifeSiteNews, in which Toronto hair salon employee Jordan Hunt “roundhouse-kicked” Campaign Life Coalition youth coordinator Marie-Claire Bissonnette at a pro-life rally. Noble Studio 101 fired Hunt after his identity was confirmed, and several members of the Canadian Centre for Bio-Ethical Reform subsequently identified Hunt as the same man who had attacked another pro-life woman in Toronto.

“It disgusts me even more that I’m not the first pro-life woman Jordan Hunt has assaulted. I’m glad that the victim has posted this,” Bissonnette told LifeSiteNews Friday in response to these subsequent developments. “I hope people will continue to speak up in defense of the preborn and in defence of our rights to speak the truth with regards to abortion.”