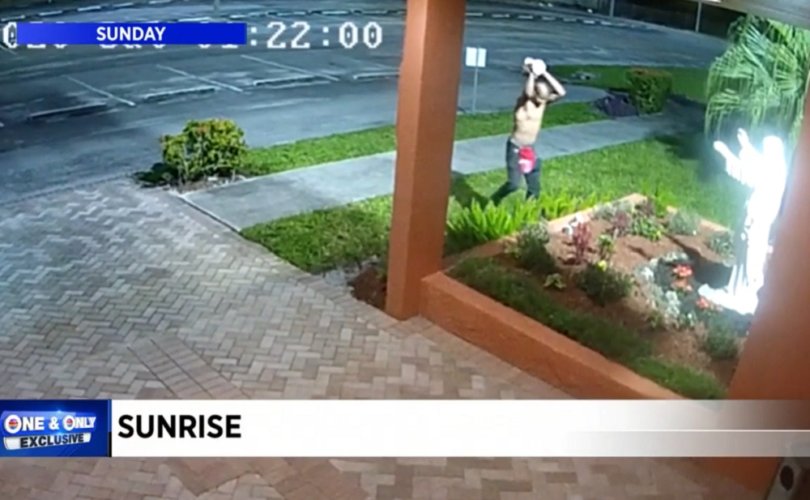 The video shows a shirtless man hurling a large rock at a statue of Jesus, smashing the statue and knocking it off its pedestal.

The hands of the statue were broken off from the fall.

The man then poured accelerant on the ground and set it on fire.

He also beheaded statues of the Virgin Mary and St. Francis, shoving them down the storm drain.

The damages amount to approximately $6,000.

“What he did is very sad, and I know it doesn’t represent who he is. … I’d love to tell him that we love him and we’re praying for him,” Fr. Rodriguez said.

Parish office manager Babette Heron said that while the incident was “very unsettling,” things could have been “so much worse … the whole building could have caught on fire. It could have spread.”

Archbishop Thomas Wenski of the Miami archdiocese said he has paid attention to similar incidents in the past and wants them to be prosecuted as hate crimes.

Just 40 minutes away from Sunrise, another statue of Jesus was beheaded four months ago.

This attack adds to what Tennessee Republican Rep. Chuck Fleischmann has called a “disturbing trend” of attacks on churches.

Louisiana Republican Senator John Kennedy recently wrote to Attorney General William Barr expressing his concern over a series of attacks throughout the country.

“Catholics are under attack in America. That is a sentence I hoped I would never have to write, but it is the reality we are facing,” Kennedy wrote.