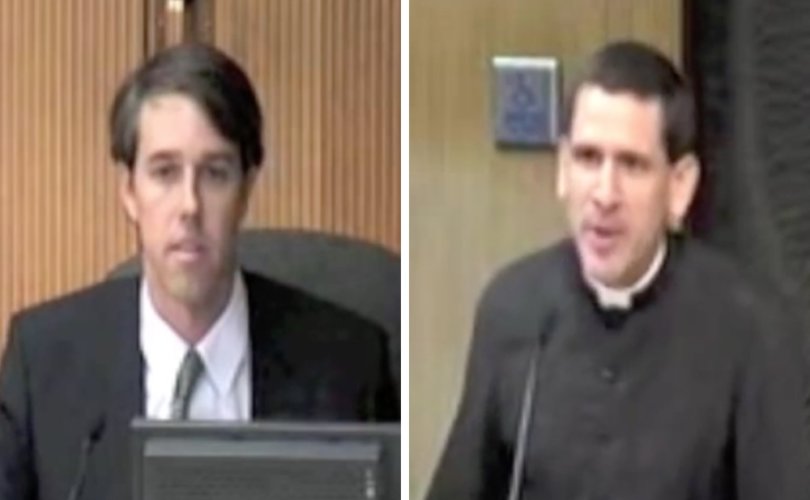 EL PASO, Texas, March 22, 2019 (LifeSiteNews) — A video of pro-abortion congressman Beto O’Rourke, who is running for president, has surfaced showing him berating a Catholic priest for defending male/female marriage at an El Paso City Council meeting in 2011.

The incident took place in June 2011 when El Paso priest Fr. Michael Rodriguez spoke against extending marriage benefits to same-sex couples during the public comment part of the meeting. O’Rourke, who had been serving as city councilman since 2005, called Fr. Rodriguez back to the podium after his remarks, seemingly to do nothing more than lecture him so as to score cheap political points. (O’Rourke’s questioning begins at the 6:00-minute mark).

Admitting that he himself was baptized and raised Catholic, O’Rourke claimed he had an “obligation” to point out the “moral failings” of the Catholic Church, especially on child abuse, and that “luckily” he doesn’t need Fr. Rodriguez’s approval to vote how he sees fit. “I want to know why this, for you, has become the burning issue of its day,” O’Rourke inquired, “and how you can stand here with a straight face and say that this is a priority for the Church.”

Fr. Rodriguez, who attended major seminary at the Pontifical North American College in Rome and completed his theological studies at the Pontifical Gregorian University, calmly responded to the hostile line of questioning by explaining that the crisis in the Church is due to human failings and because dissident clergy don’t live by their vows. But everywhere the Church’s teachings are obeyed, “flourishing” takes place.

For speaking out at the meeting and for writing opinion pieces in the El Paso Times explaining the Church’s teaching on homosexuality, Fr. Rodriguez was transferred to a small, remote parish by then-El Paso bishop Armando Ochoa. Fr. Rodriguez’s unjust treatment was extensively covered by The Remnant Newspaper in several reports and interviews. Read them here and here.

In exclusive comments provided to LifeSiteNews this week, Fr. Rodriguez says O’Rourke’s remarks at the meeting were “disgraceful” and that Bishops have the duty to excommunicate Catholic politicians obstinate in their public support for abortion and/or same-sex “marriage.”

Here are his comments in full:

In June 2011, I went before the El Paso City Council to present and defend Catholic Church Teaching with regard to the intrinsic evil of homosexual acts (CCC 2357), the objective disorder of a homosexual “orientation” (CCC 2358), and the moral obligation of all Catholics, especially Catholic politicians, to oppose any form of legal recognition of same-sex unions. At the time, Mr. Beto O'Rourke was a City Representative and member of the El Paso City Council. I am not sure if O'Rourke considered himself a practicing Catholic at the time, but his disgraceful response is incompatible not only with Catholicism, but also with basic respect for God, His Law, Christian morality, and the truth.

I hope more Catholics begin to realize that, at present, we are living in the midst of one of the most terrible crises in the entire history of the Catholic Church. It is a moral crisis; it is a doctrinal crisis; and it is a liturgical crisis. The vast majority of Catholics, including the hierarchy, have lost the Faith! We must beg God for the grace to recover our precious Catholic Faith, which includes the Traditional Latin Mass. Relativism, modernism, protestantism, freemasonry and secular neo-paganism have corrupted and nearly destroyed the one, true, Catholic Faith. One obvious sign of this massive corruption of the Faith is the shocking number of so-called “Catholic” politicians who support the heinous sins of abortion and homosexual activity, and the accompanying silence on the part of our Bishops.

Every single Catholic has the grave moral obligation to oppose the heinous sins of abortion and homosexual activity, both in the private and public spheres. It is impossible to be a true Catholic while at the same time supporting these intrinsic evils. Every single Catholic Bishop has the grave moral obligation to teach, promote, and defend these infallible moral truths, whatever the cost; failure to do so is a betrayal of Christ. If a Catholic politician remains obstinate in his or her public sin (e.g. support of abortion and/or same-sex “marriage”), it is without question the duty of the Catholic Bishop to issue a decree of excommunication — for the good of the individual soul, the good of the Church as a whole, and in fidelity to the truth. Where is the Catholic Bishop who is truly standing up for Christ and the truth? Where is the Catholic Bishop who is truly protecting his flock from the heretical wolves? My dear children, for those who truly know and love the Catholic Faith, it's fairly obvious that Judas Iscariot is alive and well in today's episcopate.

Fr. Rodriguez is a priest in good standing with the Diocese of El Paso, but Bishop Mark Seitz refuses to assign him to a parish because he exclusively offers the Traditional Latin Mass. Seitz appointed Fr. Rodriguez to a mission parish in July 2014 for three years but on condition that he offer the Novus Ordo Missae. At the time, Fr. Rodriguez had already been offering the Traditional Latin Mass exclusively for almost three years. Seitz revoked the assignment in November 2014.

Fr. Rodriguez was ordained a priest in 1996 and early in his priesthood served as the Vocation Director for the Diocese of El Paso. He has served in numerous parishes, both urban and rural, throughout the diocese. In 2005, Fr. Rodriguez began to offer the Traditional Latin Mass, and since 2011, he has been offering the Traditional Latin Mass exclusively. He is currently an adviser to the Canadian-based Fatima Center and is a frequent public speaker at Traditional Catholic conferences. Fr. Rodriguez is fluent in English and Spanish, and is proficient in German and Italian.