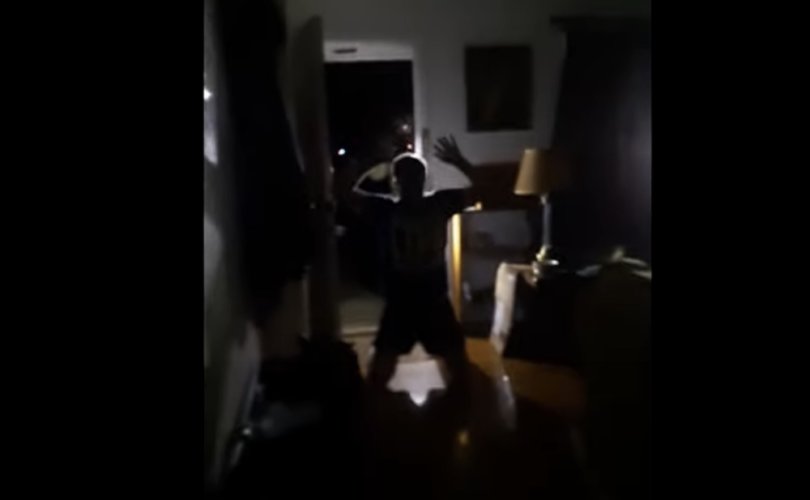 WASHINGTON (LifeSiteNews) – Video has surfaced of the FBI raid of pro-life activists charged by the Biden administration Justice Department (DOJ) with “federal civil rights offenses” for the “invasion” of an abortion mill two years earlier.

On Thursday, LifeSiteNews covered the arrest of nine pro-life activists for blocking the entrance to a D.C. abortion center in October 2020, as part of an effort to offer help to families seeking abortion, counsel them to change their minds, pray with them, and inform them about local resource centers.

The Biden DOJ alleges that they “engaged in a conspiracy to create a blockade at the reproductive health care clinic to prevent the clinic from providing, and patients from receiving, reproductive health services” when they “forcefully entered the clinic and set about blockading two clinic doors using their bodies, furniture, chains, and ropes.” The pro-lifers face up to 11 years in prison, three years of supervised release, and a fine of up to $350,000.

The video released Friday shows armed agents entering the home, holding pro-lifers at gunpoint, and ordering them to put their hands up and lower to their knees. The pro-lifers are respectful and compliant throughout.

“But if the pro-life rescue (sit-in) took place in 2020, why did the FBI wait until 2022 to raid their homes?” asks pro-life Catholic priest Fr. David Nix.

Later Thursday, it was reported that the organizer of the rescue, Lauren Handy, was arrested when the police received a tip leading to the discovery of the bodies of five aborted babies in her home, which quickly became a subject of rampant online speculation.

Now, Handy’s allies are beginning to speak out about her side of the story. The group Progressive Anti-Abortion Uprising (PAAU), for which Handy is activism director, issued a press release Friday explaining that “prior to the arrest, one of the defendants privately arranged for the Metropolitan Washington D.C. Police homicide unit to pick up five recently discovered late-term aborted babies for forensic examination. Their late gestational ages as well as their apparent sustained injuries potentially show violations of the Partial Birth Abortion Act as well as the Born Alive Infants Protection Act which are federal crimes.”

“We are aware that the Metropolitan Police Department has stated they do not believe a crime has been committed against these babies under D.C. law,” PAAU founder and executive director Terrisa Bukovinac said. “However, the laws in question are federal laws enforced by the U.S. Department of Justice.”

Nix writes that he personally viewed images of the bodies last week, and “I can say that these are the largest babies killed that I have ever seen pictures of.  I really am not sure if it’s abortion or infanticide, which clearly explains the urgency of the left to pin this on pro-lifers who were turning in bodies who died by possible infanticide.  They are too gruesome to link here.”

PAAU adds that it will hold a press conference next Tuesday to share more details on the case, including where the babies came from and how they were obtained. LifeSiteNews will continue to monitor the story as it develops.