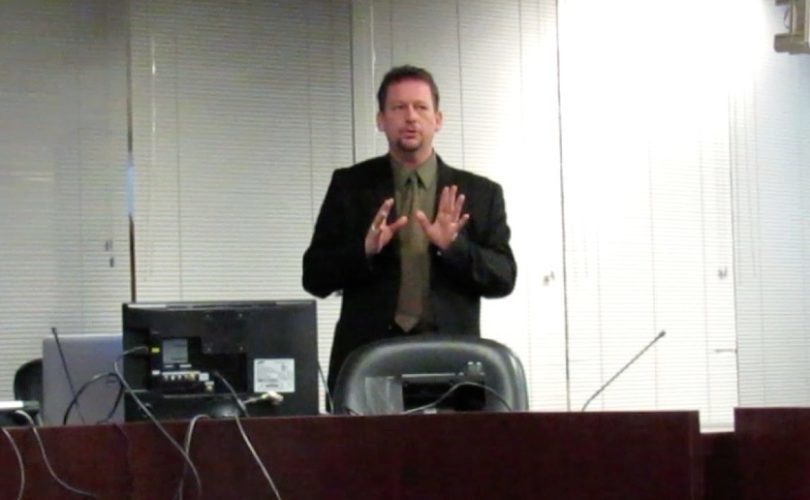 TORONTO, April 21, 2015 (LifeSiteNews.com) — A Catholic educator in Ontario laid out his strategy for convincing the York Catholic District School Board to become pro-homosexual at an activist conference for teachers April 10. When he realized he had been filmed, he demanded the footage not be posted online.

“I spent much of my life steeped in power analysis theory and taking a look at serving groups who were marginalized within any hegemonic group,” Michael Way Skinner, the York Catholic District School Board’s coordinator of Religious Education, Family Life and Equity, told about 30 teachers attending his workshop, half of them identifying as Catholic. “So, I was quite comfortable taking on how we could serve our LGBTQ students in our schools.”

Skinner’s workshop, titled “Implementing LGBTTQQ Supports Under the Catholic School Board,” revealed exactly how the process worked to make his board explicitly pro-LGBTQ.

He gave it at the first annual educators conference hosted by the homosexual activist organization Jer’s Vision, now called the Canadian Centre for Gender and Sexual Diversity, in Toronto’s City Hall April 10.

The 49-year-old, who was educated at Catholic University and later Harvard and who calls himself a “devout Roman Catholic,” said he began his task by gathering every Church document he could find mentioning homosexuality.

What emerged were a lot of what he called “challenging pieces” regarding Church teaching against homosexuality. But along with these texts were also what he called “some of the most beautiful statements I had ever read” on homosexuals.

“And we decided that that’s part of the conversation that was missing in our Catholic community,” he said.

Using his method of cherry-picking through ecclesial documents, Skinner was able to produce a list of 17 texts wherein, he says, the Church offers a “much richer dialogue” regarding people attracted to the same sex.

Skinner gave as an example Cardinal Joseph Ratzinger’s famous 1986 document on the Pastoral Care of Homosexual Persons, given while he was the head of the Congregation for the Doctrine of the Faith before becoming Pope Benedict XVI.

Ratzinger wrote at that time: “It is deplorable that homosexual persons have been and are the object of violent malice in speech or in action. Such treatment deserves condemnation from the Church's pastors wherever it occurs. It reveals a kind of disregard for others which endangers the most fundamental principles of a healthy society.”

“New things opened up for me,” Skinner said, calling such passages a way forward to provide “some positive and loving messaging to our [LGBTQ] students.”

But what Skinner calls an “honest look at what’s actually being said” regarding homosexuality in Church documents, such as the one mentioned above, entirely ignores passages expressing the Church’s full position on homosexuality. For instance, one of Skinner’s 17 quotes is the following from the above CDF document: “…the particular inclination of the homosexual is not a sin…” But he leaves out the remaining part of the sentence stating that the inclination is “…a more or less strong tendency ordered toward an intrinsic moral evil; and thus the inclination itself must be seen as an objective disorder.”

Skinner also ignores that the same CDF document describes homosexual acts as “intrinsically disordered, and able in no case to be approved of.” He furthermore neglects to mention that the same document urges that persons attracted to the same sex receive special help “lest they be led to believe that the living out of this orientation in homosexual activity is a morally acceptable option. It is not.”

In fact, Skinner's work of supporting Catholic students afflicted with same-sex attraction appears to ignore the Church's anthropology and clear teaching within that anthropology of sexuality, male-female complementarity, marriage, and homosexuality as a deviation of God’s plan for human sexuality. The Church's strong condemnation of homosexual acts is ignored along with the teaching that the homosexual inclination itself is “objectively disordered.”

A conference hosted by the Catholic Association of Lesbian and Gay Ministries (CALGM) in the U.S. in 2011 — where Skinner encountered Dr. Caitlin Ryan of the ‘Family Acceptance Project’ — gave him the tools he needed to use his compilation of 17 LGBTQ-positive-messaging texts gleaned from Church documents to bring about pro-LGBTQ change in his Catholic school board. Skinner said the main thing he learned at the conference was how to talk within a religious context to suppress objections to homosexuality based on religious reasons.

After returning from the conference, Skinner put together a presentation on behalf of the York Catholic District School Board about the “good things our faith is saying to people [who identify as LGBTQ]” and, he says, presented it to Toronto’s Cardinal Collins. He strongly advised attendees at his workshop to work from the top down.

“Don’t hide what you’re doing from anyone. Don’t do anything in a clandestine way. Include the powers that be in all your discernment,” he said.

Skinner presented Cardinal Collins with his choice selection of Church quotes on homosexual persons along with his plan to uphold the dignity of LGBTQ students via these texts, telling the Cardinal that he only wanted what the Church wanted.

“What we did is we sat with the Cardinal and I said this is what we’re doing. And near the end he said: ‘Well, I have,…’  It was never really about right or wrong. It was about sensibility. And I was like, ‘OK, that’s a good idea.’ And I put those things in [the proposal]. And then he was like: ‘OK,’” Skinner said.

LifeSiteNews reached out to Cardinal Collins asking about the accuracy of Skinner’s account, but was told by Archdiocese of Toronto spokesperson Neil MacCarthy: “I will pass on your report and certainly let you know if there is any public comment related to this issue.” No comment was provided by press time.

Claiming the cardinal’s blessing, Skinner says he moved forward by presenting his document to the Ontario bishops, and then to his board’s trustees. The document has since morphed into an LGBTQ “implementation resource” for the York Catholic school board titled All of God’s Children.

“The more we could shore up what we were doing in the faith community, by the time we got to presenting to our trustees, I could say, ‘Well the Cardinal addressed this, and this is why we put this in, [or] the bishops didn’t ask that question so I wonder if they had a different sense of the document [than you do]’ – Because, I could demonstrate how we included the ecclesial community in everything we were doing.”

Skinner pointed out that obtaining ecclesial support was a crucial step for moving forward and eventually quashing future objections from concerned parents.

“And to this day, it’s been years since, if anybody has concerns, I merely would say: ‘Really, I’m not doing anything other than my job, then what I’m supposed to do.’”

Summing up his approach, Skinner said: “So, in our work I talk about suicide attempts, and what rejection does. I put into that that our Church requires— and demands in our Catechism — that we accept with compassion and love. I talk about what acceptance means, and how the data shows the suicide rates dramatically decrease if we do what the Church tells us to do.”

“And I say, this then is a ‘pro-life’ issue. I use the language that invites people to come into a broader thinking about terms they already understand.”

Skinner called it “essential” to make sure people appointed to positions of power in Catholic school boards have an understanding of “power dynamics and issues of equity” coupled with a “deep theological knowledge” so they can deal properly with the ecclesial community.

Showing how his method of co-opting Church teaching works, Skinner told a story about how a male student in the school where he was chaplain wanted to bring his “male date” to the prom a few years ago. Skinner told the principal at that time that not allowing the student to attend would be “judgment,” saying: “Don’t ask me to discriminate against this young man, because the Church forbids it, and the Catechism.”

He also gave the example of defending the pro-gay “Day of Pink” by comparing it to the two Church feasts where pink vestments are worn by the priest. “What I’ve done at the board level is provided the language what colors mean in our faith. So, don’t be afraid to translate in faith language the color pink, [which] is a color of great joy.”

Skinner says his method is one of opening a “closed mind” by “speak[ing] a language the person understands,” whether that be to a cardinal, a bishops’ conference, or a parent. He related how he addresses concerns raised by what he called “orthodox” parents who oppose the LGTBQ agenda in Catholic schools. He convenes a meeting where he invites people “all from different belief systems and spectrums within the Catholic community” to “talk” with the concerned parents. Surrounded by voices from all sides, the “orthodox” parents usually crumble and give ground. “And we work it out. Because that’s how you do it. That’s wisdom,” he said.

When Skinner was asked by a conference attendee what he does with Church teaching that explicitly condemns homosexual acts, he said such teaching can be understood in a “theological and philosophical context, not a psychological and moral context.”

When asked by the same attendee what Skinner would tell an LGBTQ student complaining about not being able to be married within the Catholic faith, he said: “We have an ever growing tradition. We know in our tradition that the best way to betray a tradition is to pass it on unchanged. […] I always say to the students, ‘For now, this is what the Church teaches.’” He mentions to them about living “in complexity with the Church.”

The pro-gay group Harmony Movement, which describes Skinner as a “pioneer in Ontario on diversity, equity and inclusion,” awarded him last year for his “exemplary achievements in promoting diversity in their school/board and community.”

“Michael was the lead writer for ‘All God’s Children,’ a resource providing pastoral support to LGBTQ students. Michael’s work with the LGBTQ community is widely recognized and in 2013, the Catholic Association of Lesbian and Gay Ministries invited him to speak at their annual conference,” Harmony Movement states on its website.

Skinner’s board is now known for running annual events such as “Inclusivity Week” with “rainbow inspired” events that “celebrat[e] our different genders, races, sexual orientation [sic] and abilities.” All 15 of the board’s secondary schools host GSA-type-clubs where Catholic teaching on homosexuality is whitewashed.