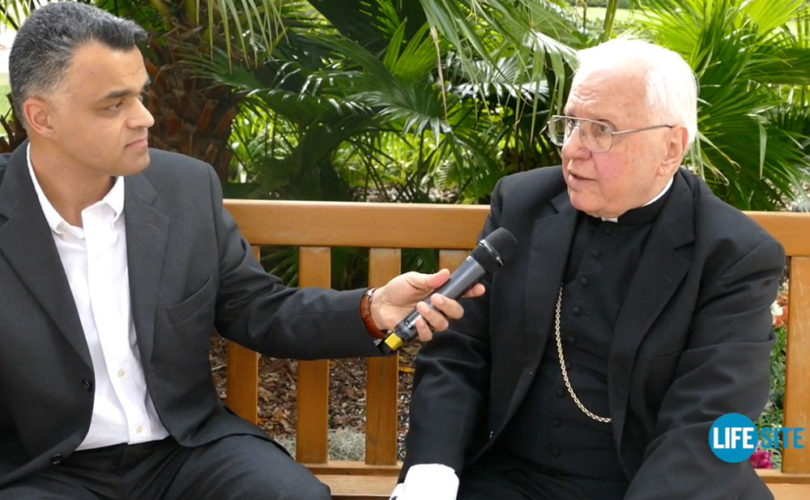 ORLANDO, Florida, March 4, 2016 (LifeSiteNews) — A U.S. Catholic bishop is warning that the pro-LGBTQ lobby’s fight for so-called “equality” has become so out of control that Christians should expect increasing persecution for simply believing and living according to basic Christian truths involving marriage, family, and morality.

“We've had bakers refuse to bake cakes for gay ‘marriages’ and as a result, they are imprisoned or fined. They have to go out of business. We've seen florists who don't supply flowers. I'm convinced that there is going to be every effort made to destroy everything Christian that would in the least bit oppose this kind of degeneration,” stated Bishop Fabian Bruskewitz, former head of the Lincoln Diocese, in an exclusive interview in January with LifeSiteNews’ John-Henry Westen.

Bishop Bruskewitz, considered by many as a hero in defense of Catholic orthodoxy amidst the upheavals in the Church in recent decades, called the push for the acceptance of homosexuality in the U.S. “devastating.”

“I can't believe that a tiny minority of the human race would perpetuate and try to, not just seek tolerance, but actually seek acquiescence and support for a perversion that is repulsive to normal human beings,” he said.

The Catholic Church teaches that homosexual acts are always wrong because they are “contrary to the natural law” and therefore “intrinsically disordered.” The Catechism of the Catholic Church states that such acts “close the sexual act to the gift of life” and they “do not proceed from a genuine affective and sexual complementarity.” Numerous Christians hold that they are loving homosexuals when they warn them about the dangers to both body and spirit that accompanies homosexual behaviors.

Bishop Bruskewitz called it “preposterous” that folks are buying the argument that the relationship of two men or two women who put organs into the wrong orifice should be made into a matter of “human rights or racial justice” and be equated with a sexual relationship between a man and woman that produces children.

“But how can [this] link in the minds of manipulatable human beings? Well, that's the case. And, if you dare to speak out, you are a bigot,” he said.

He said that the persecution against Christians will especially come swiftly to government-run institutions such as the military, where the government will more easily be able to enforce its sexual ideology.

“There are military chaplains, those who administer the ordinariate of the military in our country, who are fearful about what is going to happen if two lesbians, who claim to be Catholic, come in and insist that they be married by the Catholic chaplain. If he refuses, it is entirely possible that he will be court-martialed and have to spend 40 or 50 years in Leavenworth penitentiary.”

“So these persecutions are in the offing. And I think that they're not going to go away. And the minute that one tries to protest, they are denounced as a bigot, and as a racist, and God knows what else sort of things are heaped upon you. So that's the danger of the persecution. So I think it's probably coming,” he said.

Commenting on this, Bishop Bruskewitz said: “It sounds horrible, but, right now, given what we've experienced in this cultural upheaval, I don't see that it is that far off the mark.”

The bishop suggested that the attacks are not only coming from without the Church, but also from within. He mentioned Chicago Archbishop Blase Cupich by name as someone who he said publicly holds “mistaken” views on Church teaching that are leading Catholics into error. The archbishop had put forward arguments last year that divorced and remarried Catholics, as well as homosexuals (here and here), should be able to decide for themselves according to their own consciences if they want to receive Holy Communion.

“I think Archbishop Cupich is mistaken in giving that kind of sovereignty to conscience. Conscience is the supreme subjective criteria for morality. But, there is an objective criteria for morality, as well. And, it's the duty of those who inform consciences — including those who form their own consciences — to conform their consciences to the objective norm of morality, which is God's natural law written into the human heart – the laws which God has revealed in Sacred Scripture and Sacred Tradition, the laws of the Church.”

“The law is the measure of objective morality. And there is such a thing as objective morality, otherwise, we fall into complete relativism and the nonsense that Pope Benedict XVI spoke against when he talked about the despotism and tyranny of relativism.”

“No, conscience does not have that kind of solipsism, or narcissism — if you want to call it that — that would allow one to say, ‘I follow my conscience and I can do whatever I want.’ That is not correct any more than saying, ‘2 and 2 are 5 because that is what I think it should be,’” he said.

Addressing arguments that the Church must bend her teachings on marriage, divorce, and worthiness to receive Holy Communion in order to be “merciful,” Bishop Bruskewitz responded: “I think that if you detach morality and truth, you are [creating] a very serious issue here – mercy isn't really mercy. It's not merciful to tell a little child that, ‘Yes, 2 and 2 are 5.’ That's nonsense. It hurts the child ultimately, and it hurts the world by asserting something that is not true, to be true – simply because the child wants it to be true.”

Not allowing people living in grave sin, such as adulterers or Catholic politicians who publicly support abortion, to receive Holy Communion is not a punishment for the sake of causing the individual embarrassment, but for the sake of helping them to realize that what they are doing is not “synchronized with God's revelation, with the teaching of the Church, with the word that God has given us, and with the deposit of faith,” he said.

“That's the purpose of ecclesiastical sanctions. It's always a merciful undertone,” he added.

When asked what the lay Catholic faithful must do in the the face of various high-profile Catholic leaders who openly dissent from fundamental Catholic teaching and morality, Bishop Bruskewitz responded that they have a “right and the duty to call things to the mind of the clergy and to express themselves on issues.”

“More than ever, they're required to be brave and to live the call that they received from their confirmation. That oil that was put on them gave them Wisdom, Understanding, Counsel, Knowledge, Fortitude, Piety, and Fear of the Lord. And it's especially that ‘Fortitude’ aspect that has to be there. Not that we want to encourage people to be arrogant, to be disrespectful to the hierarchy or to the clergy, but to be brave and strong.”

“And that (Fortitude) and Counsel gives to the lay people the right and the duty to call things to the mind of the clergy and to express themselves on issues — and they have rights, as long as it is done with Christian charity, to do this, and sometimes they have a duty to do it,” he said.

Bishop Bruskewitz related how there were times during the Protestant Reformation when bishops and cardinals fell away from the Church and it was the lay people who “stood up and said, ‘No, this is the truth, and this is what we have to live by and stand for.’”

“I think laypeople perhaps have more of a role to play then they might expect in this catastrophic degeneration of our culture and our civilization in this 21st-century,” he said.