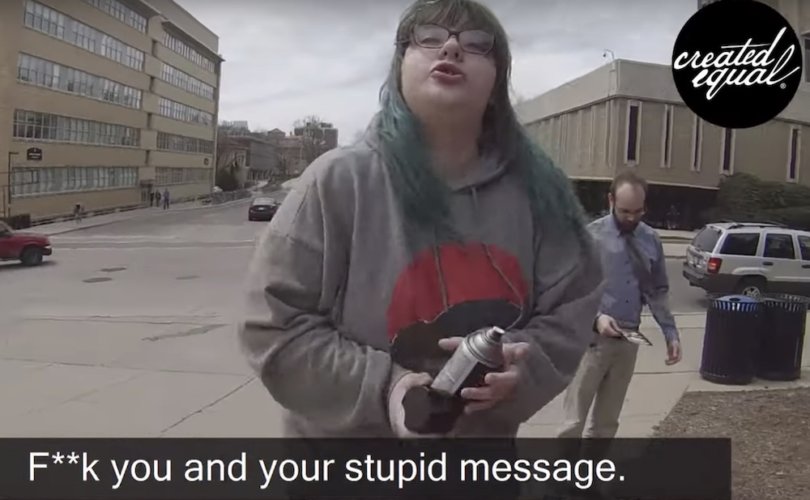 MADISON, Wisconsin, July 12, 2019 (LifeSiteNews) – Newly released video from the pro-life group Created Equal shows the police catching up to an indignant young woman caught cursing at pro-life activists at the University of Wisconsin-Madison as she ignores repeated pleas and warnings while spray-painting their signs, shoving one of the pro-lifers in the process.

The incident took place in mid-April, according to an email from the pro-life group. The video shows a Created Equal outreach volunteer repeatedly warning a woman with a can of spray paint not to deface their signs.

The pro-lifer asks her to stop, which she defies even after he repeatedly warns her about calling the police and directs a fellow volunteer to do so. The woman, whom Breitbart News reports has been identified as Sasha Timofeeva, defies him on the grounds that the signs are “triggering” and “hurt people.”

“F*** you and your stupid signs,” she declares while vandalizing them.

At points in the video, a female passerby can be heard thanking Timofeeva and calling her “my hero,” while a male bystander tells her, “as someone who agrees with you, you’re not doing the right thing here” (it’s unclear whether he was agreeing with her about abortion, or about the content of Created Equal’s signs).

At various points the volunteer tries to stop Timofeeva by grabbing her spray can, which angered her. “F***ing take my property,” she declares. “You just tried to grab my f***ing spray paint! You gonna tell the police that?” The pro-lifer responds that he was only responding to her infringement on Created Equal’s property, and that he would be telling the police.

Eventually she gets in her car and leaves, at which point the pro-lifer records her license plate number. The video next transitions to the pro-lifers speaking with a police officer, then to video of the officer interrogating Timofeeva, who can be seen holding a child in her lap.

“I just got mad at them and then painted them,” she explains.

“You premeditated ‘I’m going to get the spray can, I’m going to leave, go get it, and then come back.’ And you intentionally sprayed their signs to damage them, knowing that that’s what would happen if you did that, knowing that you shouldn’t do that?” he asks for clarification.

“Yeah. Pretty much,” she admits, laughing as she added that “three girls walked by and they said that I’m a hero.” Timofeeva recognized that she was “damaging their property,” but adds that “I honestly don’t care how they feel,” laughing again.

The officer tells her that she could have been put in jail for her actions, but instead he was giving her citations for graffiti, disorderly conduct, and “assaultive behavior,” with the consequences to be determined at a later court date.

“Pro-abortion activists who commit violence must be held accountable. And thanks to the law enforcement in the video, that is exactly what is happening,” Created Equal president Mark Harrignton said. “We refuse to back down in the face of these threats. The escalation of pro-abortion violence has forced us to take additional security measures to protect our team.”

Following the incident, Created Equal has launched a fundraiser to purchase additional GoPro body cameras for their volunteers, to help deter and/or record evidence of similar incidents in the future.