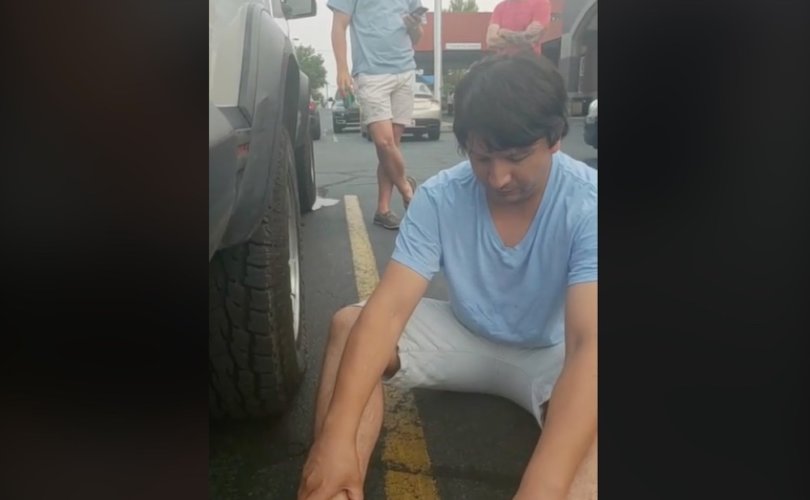 SALT LAKE CITY, August 24, 2018 (LifeSiteNews) – Utah mother Doris Stiles-Scown merely set out to take her 12-year-old daughter clothes-shopping at Rue21 in Salt Lake City, but became a local and national hero after chasing down and confronting a man who allegedly tried to spy on her changing daughter in a dressing room.

36-year-old Jorge Leon-Alfaro allegedly attempted to record the girl with his phone and grab her legs last Saturday, Fox News reports. But Stiles-Scown chased him out of the dressing room and into the parking lot, where other shoppers and mall security helped her surround him until police arrived.

It was then that the outraged mother took out her own phone and began recording, tearfully describing what had just happened and making sure to capture Leon-Alfaro’s face in detail.

“This right here is what a predator looks like,” she said, showing the man sitting on the ground, his head hanging down. “Not today, buddy, not today. I’m gonna make sure your face gets out so that you’re not in any more stalls looking under little girls dressing.”

She demanded that Leon-Alfaro look at the camera so he could be clearly identified. Leon-Alfaro remained silent for almost all the interview, except for one unintelligible comment that may have been a request to “wait for the officers.”

“A twelve-year-old girl, that’s what she gets for her birthday? It’s her birthday in two days. She gets some sick pervert looking under her stall? Trying to grab her?” she asked.

“You’re so lucky that I don’t hurt you because that’s what I want to do right now,” Stiles-Scown cried. “Because what you did to her, you’re going to leave a scar on my daughter permanently. Are you happy with yourself?”

“It took everything in me not to run him over,” she admitted later in the interview.

Leon-Alfaro has been arrested and booked on charges of felony voyeurism, the Salt Lake City Police Department confirms. Detective Greg Wilking credited the arrest to the vigilance of multiple shoppers in the store, and the mother declared that she will be at “every single court date.”

As of the time of this writing, the Facebook video has been viewed approximately 16 million times and shared more than 391,000 times.