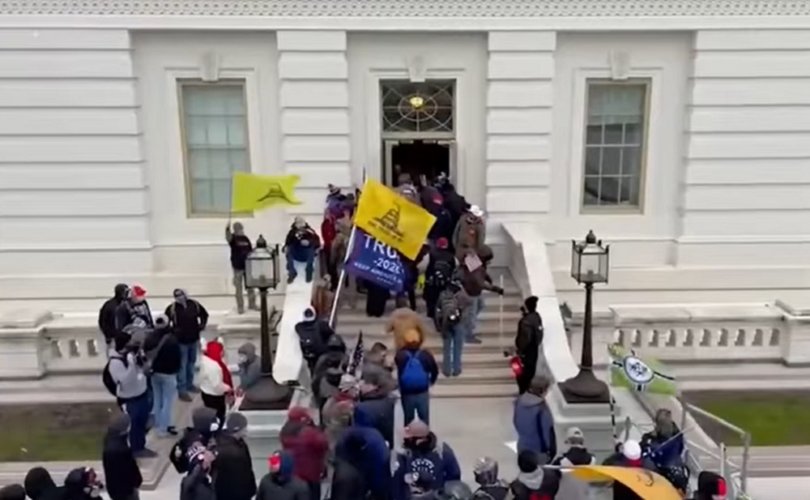 WASHINGTON, D.C., January 9, 2021 (LifeSiteNews) — In a video released on Twitter that now has over 33 million views, U.S. Capitol police can be seen quietly forfeiting barricades and allowing some protesters access to the Capitol building during a protest Wednesday.

At least one protester appeared already to have entered the restricted area.

Videos from different parts of the protest show different interactions between police and protesters.

When I told you that many people who were at the Capitol on Wednesday thought they were allowed to be there, this is why. As you can see in the video, Capitol Police at one entrance opened the door and let the protesters in. https://t.co/BNDv9DcPQW

they didn’t “breach” or “storm” the capitol building THEY WERE LET IN pic.twitter.com/SVeo6BcFV0

Some protesters were tear-gassed, while it appears others were able to simply walk into the building without going through security. Capitol Police shot and killed 35-year-old Ashli Babbitt, an Air Force veteran and Trump-supporter, during the day’s chaotic events. A Capitol Police officer also died of injuries sustained during the incident.

While it seems the vast majority of those who entered the Capitol — which is generally open to the public, provided they go through security — were simply following the crowd and then wandered around inside, a small group vandalized parts of the Capitol and even entered the legislative chamber to pose for photos on the speaker’s chair.

Once inside, crowds can be seen walking within velvet ropes as they make their through Statuary Hall unimpeded, Capitol Police standing by.

Liberal politicians and journalists, as well as some Republicans, have rushed to label the events a “coup attempt.”

READ: LifeSite is asking for any tips, videos of Capitol protests

Another video posted to YouTube shows an apparent Trump-supporter taking a selfie with an officer as other people mill about inside the Capitol.

“They knew this group was coming, they knew it was going to be enormous but they didn’t do any preparation to control the crowd such as fencing, barricades, and cement structures to prevent traffic and people flow,” said a former SWAT force member in an article published by Newsmax.

“It’s pretty clear that there’s going to be a number of people who are going to be without employment very, very soon,” Rep. Tim Ryan (D-Ohio) added this week. “There were clearly enormous strategic and planning failures by the Capitol Police, by the sergeant at arms, and anybody else who was a part of coordinating this effort here.”

D.C. mayor Muriel Bowser had firmly rebuked calls for a larger police presence ahead of the January 6 march. “To be clear, the District of Columbia is not requesting other federal law enforcement personnel and discourages any additional deployment without immediate notification to, and consultation with, MPD if such plans are underway,” Bowser wrote on Twitter.

Untangling the accounts of what happened at the Capitol on Jan. 6, and some perspective