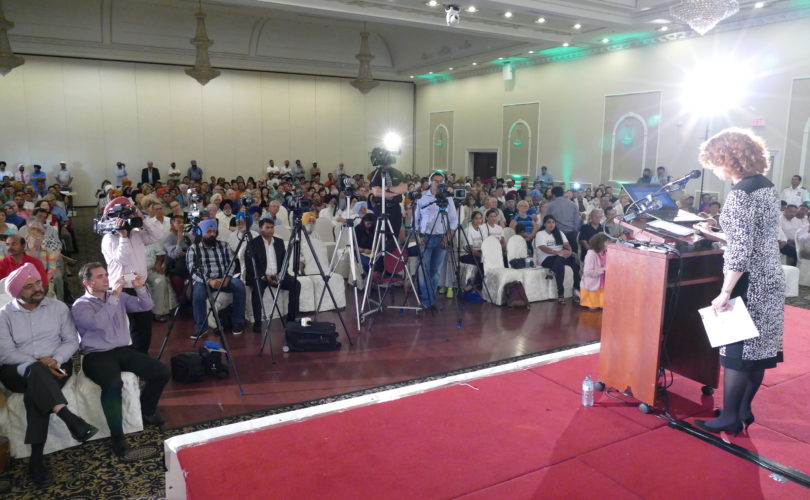 Editor’s Note: included are the videos of 1) the complete one hour main talk given by Dr. Grossman and 2) the complete 20-minute Question and Answer session. Both are available in high definition (view full screen if you wish) or lower definitions to fit slow Internet connections.

TORONTO, ON, August 26, 2015 (LifeSiteNews) – American psychiatrist Dr Miriam Grossman pulled no punches when describing how the Ontario Liberal government’s controversial sex-ed curriculum is not science – as the government claims – but is instead an ideology intent on indoctrinating kids with a dangerous sexual agenda.

The upwards of 1,000 opponents to the sex-ed curriculum – which the Liberal government will roll into all publicly funded schools in about two weeks – responded to Grossman’s fact-packed, hour-long presentation with frequent outbursts of sustained applause, and a standing ovation at the end.

See the detailed initial LifeSite report on this event with numerous photos here.

Grossman’s presentation, in which she made good on her promise to give parents “ammunition in your battle,” is hugely significant, noted Canadian Families Alliance (CFA) representatives, and equally significant are the two LifeSiteNews videos of the seminar. CFA and CFA affiliate HOWA (the main organizer of the event) hope the videos will be used as a major resource for concerned parents and others.

“The priority” of the Ontario curriculum “is not your child’s health,” the New York-based psychiatrist, sex-ed critic, writer and international speaker told her standing-room-only audience August 18.

“The priority is to mould your child’s thinking and attitudes so that they respect and affirm and are comfortable with all sexual choices and lifestyles.”

Within three months, outraged and concerned parents had formed the Canadian Families Alliance (CFA), a coalition of more than 25 parents’ rights organizations, associations and social media groups representing over 200,000 parents from a broad range of ethnic, faith and cultural backgrounds.

And their “amazing” mobilization – which included protests at the Ontario Legislature building at Queens Park, Facebook assemblies, large-scale use of Internet messaging to rapidly mobilize supporters when needed, car rallies, petitions and a “strike” in May where 35,000 (Grossman mentioned 20,000, but the actual number was greater) children were kept home from school – convinced Grossman to come to Toronto despite a hectic schedule. “I’ve never seen anything like this,” she marveled.

As part of this grassroots campaign, Jotvinder Sodhi’s Mississauga-based HOWA Voice for Change, a member of CFA, sponsored and organized Grossman’s seminar with the support of CFA affiliated organizations and leaders.

Sodhi said that Premier Kathleen Wynne has “labeled” the parents opposed to the sex-ed curriculum as “homophobes,” and “some of the so-called experts” have dismissed them as “illiterates.”

Moreover, the Liberals “wasted” $1.8 million to “advertise the government agenda,” Sodhi told LifeSiteNews, leaving parents having to “educate fellow parents” about what’s really going on in the controversial curriculum.

That’s why HOWA sought out sex-ed expert Grossman to speak at this event: “We wanted someone who knows the subject and who can speak the facts without fear – without fear, that’s very important.”

Commenting on the videos, Jack Fonseca, project manager for Campaign Life Coalition, stated that they “will completely debunk the myths and lies about the Liberal sex education curriculum that have been put out by Premier Wynne and her allies in the media”.

“With unassailable logic, and simple, down-to-earth language, Dr. Grossman has proven without a shadow of a doubt, that the Ontario sex-ed curriculum is not about protecting the health and safety of children, but rather, pushing an agenda of sexual revolution which make children more unhealthy and more unsafe.”

“In this dynamite lecture Grossman has set fire to the Liberal house of cards which claims that the updated curriculum is necessary to help students ‘develop healthy relationships’,” he added. “To the contrary, you will learn why this curriculum will lead children to developing very unhealthy relationships, not to mention a lot more sexually transmitted diseases.”

Lou Iacobelli, retired teacher, author of the Everyday For Life Canada blog and a leader in CFA, says the same, lauding Grossman’s presentation as “an incredible resource” that backs up, using documentation from the sex-ed curriculum, “what parents have been saying all along, that this curriculum is age-inappropriate and puts children at risk.”

He pointed out that Grossman has the credibility to make these claims because, as she told the crowd, she has seen for herself the consequences of such sex-ed agendas.

Indeed, Grossman’s campaign started when, as a physician at a clinic at UCLA for 12 years, she saw “thousands and thousands” of students, many of them women, who were suffering because of their “sexual choices.” That led to her research and two books: “Unprotected,” followed by: “You’re teaching my child WHAT?”

Grossman’s sex-ed critique is essential information not just for Ontario parents, but for parents everywhere, because the sex-ed agenda crosses all borders and is part of an aggressive worldwide push for “sexual rights” by International Planned Parenthood Federation and its allies, points out Matt Wojciechowski, CLC’s representative at the United Nations.

“What Wynne is bringing to Ontario is just scratching the surface of a larger global agenda,” he told LifeSiteNews. “Parents need to continue opposing her radical sex-ed curriculum for the well-being and safety of their children, but at the same time, they need to be made aware that this will not be the final assault.”

Wojciechowski explained that there is “a growing international ‘sexual rights’ movement that is very visible especially at the United Nations. It is championed by the International Planned Parenthood Federation and other like-minded organizations which are determined to expand their radical views to every corner of the planet.”

IPPF and its allies, Wojciechowski stressed, “are obsessed with exporting abortion on demand, redefining gender, altering the traditional family, and imposing sex-education programs on every culture, race and faith group.”

That’s why it’s imperative that parents protect their children.

Grossman urges them to “stand firm” even though “the creators and supporters of this curriculum see themselves as noble and compassionate” and that “you’re the problem,” and even though the mainstream media ignores them and that “the underlying message is that anyone who disagrees with this curriculum must be uneducated or a bigot.”

But Grossman’s critique was understood by her listeners to prove that these charges are false, and that the critique is an invaluable resource to convince skeptics who can’t or won’t see the dangers of the sex-ed agenda.

Or as Grossman told parents: “Your voices matter… Science is in your corner. Parents know what’s best for their children – not educator activists.”

Ontario readers may sign up for the September 2 province-wide protests at MPPs offices, go here. So far, there are protests planned at 90 of Ontario’s 107 constituencies. The parents’ movement seeking removal of the curriculum is urging all concerned citizens to join this special effort to influence individual Ontario legislators.

See related article:
VIDEO: How DO you to talk to kids about sex? US sex-ed critic gives practical tips