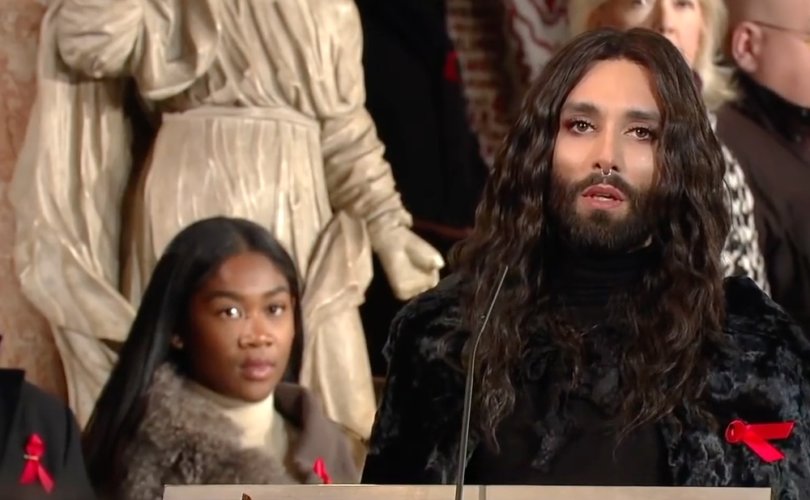 VIENNA, Austria, December 14, 2017 (LifeSiteNews) – Viennese Cardinal Christoph Schönborn co-hosted a homosexual-themed prayer service in his cathedral earlier this month for World Aids Day. The event in St. Stephen's Cathedral included speeches given by a world-famous ‘drag queen’ and a homosexual activist from the pulpit within the sanctuary.

Homosexual-themed banners were hung on the walls and spread on the floor in the cathedral for the event. Eerie purple lighting illuminated the Cathedral’s columns.

The event was co-hosted by Gerry Keszler, a homosexual activist and organizer of Vienna’s “Life Ball,” one of the most significant pro-homosexual charity events in Europe. Cardinal Schönborn received Keszler at the Cathedral’s entrance for the non-denominational service.

In his opening comments, Schönborn acknowledged Keszler along with “all those who are responsible for the Life Ball,” an AIDS fundraiser.

During a prayer for people who have died of AIDS, Schönborn inferred that “all” may “find a home” with God and that the dead were “not lost forever.”

The musical accompaniment for the event was provided by the Vienna Chamber Orchestra and the Vienna Philharmonic Choir performing Mozart’s Requiem.

The diocese said it was a memorial service to “commemorate the 36 million dead and to set a signal against prejudice.”

Cardinal Schönborn said in his sermon that God did not come to condemn but to save, asking “what does this mean for us? Not to judge, not to exclude, not to bring (people) into line.”

After the cardinal’s sermon Austrian transvestite Thomas Neuwirth, who performs under the pseudonym “Conchita Wurst,” spoke, citing “persecution of those who live their identity in a way that is different from that of the majority,” along with “exclusion and discrimination.”

Neuwirth invited those in attendance to come forward and put a piece of incense into a bowl and offer a personal intercession.

The transvestite rose to fame after winning the Eurovision song contest in 2014. Schönborn at the time expressed delight to Austria’s Catholic Press Agency (Katholische Presseagentur Österreich) at Neuwirth’s win of the contest as “Conchita Wurst.”

The drag queen’s stage name is reportedly intended to show disrespect for the Blessed Mother. “Conchita” is a derivative of the Spanish first name Concepcion, used mostly in Latin American countries to honor the Immaculate Conception and the Virgin Mary. And while “Wurst” is the German word for “sausage,” it is also used by German speakers to signal indifference, that something does not matter to you.

In his closing comments for the service, Keszler said that it does not matter who we love or believe in, with Schönborn thanking Keszler for his remarks.

A video of the full event can be found HERE.

The cathedral has also been the site of a Valentine’s Day blessing that includes homosexual couples.

Last fall the cathedral profiled a homosexual couple and their adopted son as an alternative form of family in a bulletin devoted to Amoris Laetitia.

During the 2015 Ordinary Synod on the Family Cardinal Schönborn said the Church should embrace the “positives elements” of gay unions.

In 2012 Schönborn overruled an Austrian’s pastor’s decision to bar an open homosexual from sitting on his parish council.