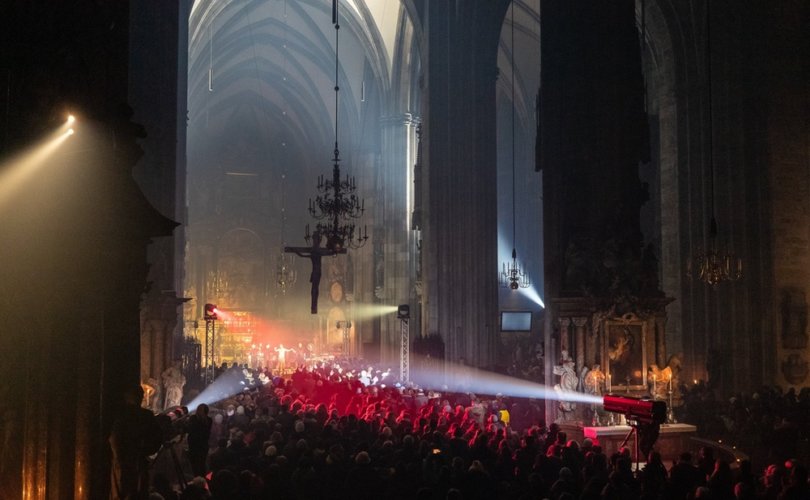 This is the third time Vienna’s Archbishop has allowed the “LIFE+” association to use the cathedral as a venue for the World AIDS Day charity concert that will take place on Saturday, Nov. 30.

The event last year, which the Cardinal attended, featured a shirtless actor known for playing homosexual roles standing on the altar rail, loud rock and electronic music, and actors dressed as demons.

This year, Austria’s infamous drag queen “Conchita Wurst,” who won worldwide fame when he represented his nation at the 2014 Eurovision contest, is one of a number of performers scheduled to appear at the “Believe Together” fundraiser in Vienna’s 14th-century mother church. The cathedral show, titled “The Yearning for the Angels…,” will be the main event among 15 being held across Vienna on November 30 to raise money for AIDS relief projects.

The organizer of the event, homosexual activist Gery Keszler, thanked the cardinal when he announced the show.

“We are very grateful for the trust placed in us by Cardinal Schönborn,” he said.

Keszler is particularly eager for this year’s concert to be a success, for his annual fundraising  “Life Ball” has been discontinued, resulting in the loss of up to 500,000 Euros to Viennese AIDs and HIV charities, he said.

The show is being co-sponsored by the Knights of Malta of Austria.

Alexander Tschugguel, who removed Pachamama pagan idols from a church in Rome during the Amazon Synod, told LifeSiteNews that Austrian Catholics “really don’t like the cathedral being used to promote the LGBT cause.”

Tschugguel, who lives in Austria, underscored that the LIFE+ events ultimately give Austria’s most prominent LGBT activists a pulpit in the Catholic cathedral.

The Life Ball, which Keszler founded in 1992, was believed to be Europe’s largest annual fundraiser for AIDS/HIV research and charities. The star-studded event ended its 27-year run with a final party in Vienna’s town hall this June.

The Life Ball was canceled, Tschugguel said, because Keszler lost the support of corporate sponsors through both his unbridled hedonism and allegations he misused charitable donations to fund his lavish lifestyle.

“[Keszler] is known to be very gross,” Tshugguel stated. “And many times he has used the Cathedral to promote LGBT.”

Tshugguel said he is less concerned about “Conchita Wurst’s” performances than he is about Cardinal Schönborn allowing the “gay icon” and other major LGBT activists to speak their minds “in our beautiful cathedral.”

“Conchita Wurst,” whose real name is Thomas Neuwirth, gave a speech in the “Stephansdom” in 2017 when Cardinal Schönborn permitted at LGBT-themed prayer service. Keszler was the co-organizer of this event, too.

Keszler embroiled Schönborn in another controversy when he claimed in 2018 that the cardinal had blessed him and his homosexual partner at a private dinner party. After the blessing, said Keszler, “his confidant had brought a bottle of champagne, and he loosened the cork, and after this blessing, this cork bursts into the air, comes thundering down, and breaks his plate – my most expensive Meissen plate!”

“This was no little bit of a forced outing for the cardinal,” Keszler said, “but since he has done it, he probably will also be fine with me saying it.”

Last year Cardinal Schönborn received criticism for allowing and attending the event at the cathedral. Austrian Father Johannes Maria Schwarz published an article afterwards on the website Kath.net critiquing the use of the iconic cathedral for the secular event. While the money went to a good cause – an HIV hospice in South Africa – Father Schwarz remarked that this house of God, “the heart of Catholic Vienna,” has been turned into a “multipurpose hall.” The event might well show “the death of a feeble Church,” he added.

Part of last year’s event was the performance in the cathedral of adaption of a 1911 Austrian play called “Jedermann.”  The revamped “Jederman” starred Philipp Hochmair – a celebrated Austrian actor known for his homosexual roles in different pro-LGBT movies  –  and featured his rock band God's Electrohand (Elektrohand Gottes).

In pictures, he is shirtless, standing on the altar rail. The concert was loud, with flickering lights, and many actors were dressed as demons. The Jedermann (Everyman) play depicts a wealthy man who realizes in his last hours of life that neither his friends nor his money will follow him into the grave. He then converts to Christianity. The organizers stated afterwards that they had received 68,000 euros in donations.

1
Pelosi receives Holy Communion at Mass presided over by Pope Francis
2
Pope Francis doubles down on restrictions of the Latin Mass in new letter
3
WATCH: John-Henry Westen, Michael Matt react to Pelosi’s Communion at Mass with Pope Francis
4
Princess Gloria: Global elites think they do good but actually serve the ‘prince of the world’
5
Arizona becomes first US state to offer comprehensive school choice for all families
Subscribe to Daily Headlines »