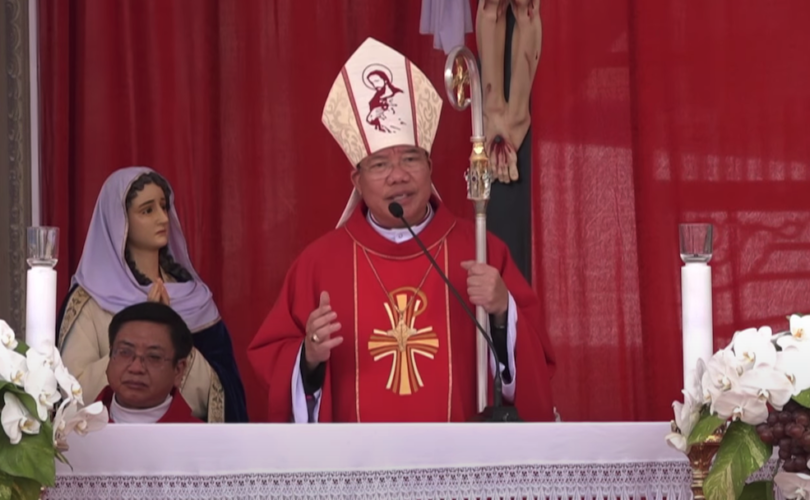 HANOI, Vietnam (LifeSiteNews) – Two Vietnamese state officials interrupted a Lenten Sunday Mass being celebrated by the Archbishop of Hanoi, demanding that he end the Mass and disperse the faithful in attendance, but were driven out by parishioners and concelebrants.

On Feb. 20, 2022, Archbishop Joseph Vu Van Thien was offering Mass at the parish of Vu Ban with other diocesan priests on the special occasion of the “Archdiocesan Mission Day.” According to reports, two men, Pham Hong Duc, secretary of the Communist Party of the city of Vu Ban, and Pham Van Chien, vice-president of the People’s Committee of the city of Vu Ban, entered the Church at the time of Communion wearing helmets. They approached the altar, ordering the Archbishop to stop the Mass and send the people away.

Concelebrants and the faithful protected the archbishop, and succeeded in getting the officials to leave the Church, allowing to the Mass to continue.

The incident prompted the Archdiocese of Hanoi to send a letter to the government that was also circulated to all the parishes of the diocese.

“This is a disrespectful act,” the archdiocese declared, “an abuse of power that seriously violates the right to religious freedom, the right to religious practice of bishops, priests and lay people, and which denigrates the holy rite of the Eucharist, which is the most sacred and important liturgy for the faith of Catholics. This gesture is unacceptable in a country where the rule of law prevails; it has aroused indignation and the pain of those who attended the mass as well as all those who saw the images on the web and social media.”

Redemptorist Father Peter Nguyen Van Khai said of the event, “For the first time, I saw local government officials approach the altar and interrupt the Mass without waiting for it to end, as they had done in the past. For the first time we see them addressing priests with violence, disrespecting sacred ministers.”

“This is a brutal and illegal action,” Nguyen continued, “This is blasphemy and blatant sacrilege.”

The Feb. 7, 2022 report released by the United States Commission on International Religious Freedom states that Vietnam is a “country of particular concern” regarding religious freedom.

“Despite its notable improvement compared to the previous religious ordinance,” the report states, “the 2018 Law on Belief and Religion (2018 Law) remains restrictive in nature and is plagued by uneven and inconsistent applications throughout the country.  Government persecution continues to be a harsh reality in the face of independent and unregistered religious groups…  In addition, authorities continue to subject believers and religious freedom advocates to long-term imprisonment and some reported deteriorating health as a result of ongoing abuse and mistreatment in prison.”