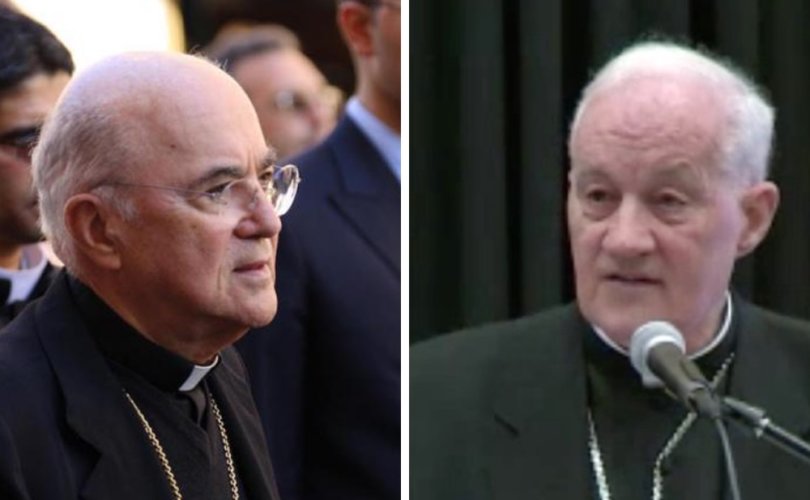 “I would like to make a special appeal to Cardinal Ouellet, because as nuncio I always worked in great harmony with him, and I have always had great esteem and affection towards him,” Viganò wrote in his second testimony released yesterday.

The archbishop said that the Canadian Cardinal would remember that after Viganò retired from his post in Washington, they had had a long conversation at the Cardinal’s apartment in Rome. It was then that he asked Ouellet to “bear witness to the truth,” suggesting that he release “key documents” bearing on the matter at his “complete disposal.”

“Your Eminence, before I left for Washington, you were the one who told me of Pope Benedict’s sanctions on McCarrick,” Viganò said, addressing Ouellet.  “You have at your complete disposal key documents incriminating McCarrick and many in the curia for their cover-ups. Your Eminence, I urge you to bear witness to the truth.”

In his original testimony last month, Viganò stated that Ouellet “communicated” to him by conversation in 2011 the sanctions Pope Benedict imposed on McCarrick.

Viganò made a distinction in his new testimony between what he saw as Ouellet’s “dignity” and “courage” during his tenure as Archbishop of Quebec and at the beginning of Pope Francis’s pontificate with his “surrender” after the promulgation of Amoris Laetitia.

“At the beginning of Pope Francis’ pontificate, he had maintained his dignity, as he had shown with courage when he was Archbishop of Québec,” Viganò wrote.

“Later, however, when his work as prefect of the Congregation for Bishops was being undermined because recommendations for episcopal appointments were being passed directly to Pope Francis by two homosexual “friends” of his dicastery, bypassing the Cardinal, [Ouellet] gave up,” he continued.

“His long article in L’Osservatore Romano, in which he came out in favor of the more controversial aspects of Amoris Laetitia, represents his surrender,” he said.

Cardinal Ouellet, who is Prefect of the Vatican’s Congregation for Bishops, gave signs earlier this month that he may not be open to Viganò’s suggestion of bringing forth documents. The Cardinal told EWTN interviewer Andrea Gagliarducci during a September 15 press conference that recent criticism of Pope Francis is an “unjust attack” and a “very serious offense.”

The Cardinal said that the Church is facing a “rebellion,” adding that “when there is a direct attack against the Holy Father, I think it is a very bad example and a very serious offense.”

Ouellet was regarded prior to his time in the Vatican as a champion of orthodoxy despite criticism he faced from within and outside the Church in the ultra-liberal province of Quebec. The Cardinal’s defence of the doctrine of marriage before the promulgation of Amoris Laetitia and the weakening of his position afterward are a matter of public record.