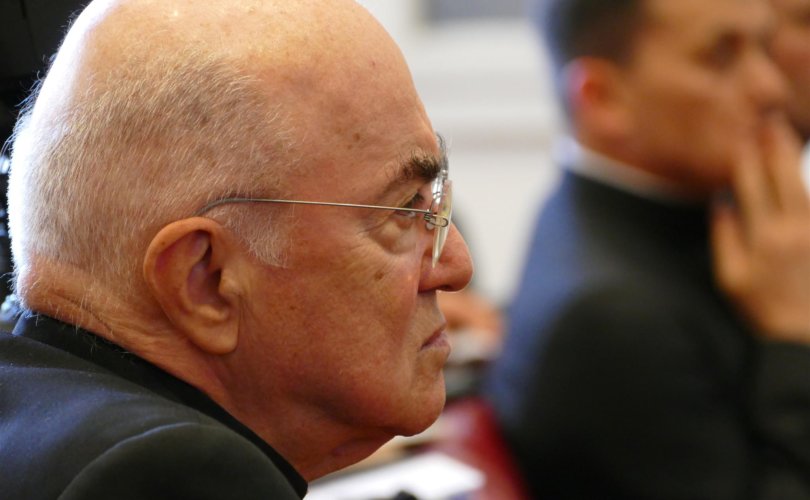 September 28, 2018 (LifeSiteNews) – Archbishop Carlo Maria Viganò explained in his new testimony released yesterday why he broke his promise of pontifical secrecy in revealing that Pope Francis had knowingly restored now ex-Cardinal McCarrick to a position of influence.

“Certainly, some of the facts that I was to reveal were covered by the pontifical secret that I had promised to observe and that I had faithfully observed from the beginning of my service to the Holy See,” Viganò stated.

“But the purpose of any secret, including the pontifical secret, is to protect the Church from her enemies, not to cover up and become complicit in crimes committed by some of her members,” he continued.

“I was a witness, not by my choice, of shocking facts and, as the Catechism of the Catholic Church states (par. 2491), the seal of secrecy is not binding when very grave harm can be avoided only by divulging the truth. Only the seal of confession could have justified my silence.

The “pontifical secret” is a pledge of confidentiality taken by some employees of the Vatican Curia and the Vatican diplomatic corps and occasionally by others, for example, those privy to information about the process leading to the choice of a new pope.

According to canon law, “Business of the Roman Curia at the service of the universal Church is officially covered by ordinary secrecy, the moral obligation of which is to be gauged in accordance with the instructions given by a superior or the nature and importance of the question. But some matters of major importance require a particular secrecy, called 'pontifical secrecy', and must be observed as a grave obligation.”

Pontifical secrecy has been the subject of great controversy in recent years because it used to pertain to the Church’s internal investigation of clerical sexual abuse of minors. Meant to protect the dignity of all involved, this provision has been eased to allow for the involvement of police. However, the oath of secrecy is still controversial, as it includes a promise not to break confidentiality even if it would bring about a greater good.

Recently Father Joseph Fessio of Ignatius Press told LifeSiteNews that he thought this part of the oath might be immoral.

Nevertheless, it is a serious matter for a member of the Vatican diplomatic corps to dispense with the pontifical secret. In his description of how the archbishop brought him his testimony, journalist Marco Tosatti reported that Viganò wept.

In his new testimony, the former papal nuncio said that his decision to reveal the “grave facts” in his possession was for him “the most painful and serious decision” that he ever made in his life.

“I made it after long reflection and prayer, during months of profound suffering and anguish, during a crescendo of continual news of terrible events, with thousands of innocent victims destroyed and the vocations and lives of young priests and religious disturbed,” he stated.

“The silence of the pastors who could have provided a remedy and prevented new victims became increasingly indefensible, a devastating crime for the Church,”  he continued.

“Well aware of the enormous consequences that my testimony could have, because what I was about to reveal involved the successor of Peter himself, I nonetheless chose to speak in order to protect the Church, and I declare with a clear conscience before God that my testimony is true.”