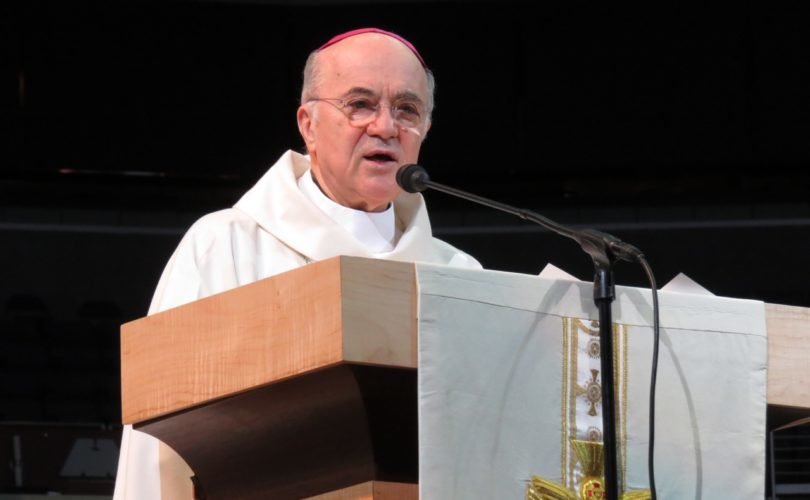 Archbishop Viganò, then papal nuncio to the United States, reads a message from Pope Francis at the 2015 March for Life.Pete Baklinski / LifeSiteNews

The former papal nuncio to the U.S. responded to efforts in the media to question his testimony that Pope Francis covered-up for McCarrick while knowing of his reputation for sexual abuse of seminarians and priests. Viganó reiterated in the interview that he had spoken with McCarrick about the restrictions Benedict had put upon him, but that as nuncio he did not have authority to enforce those restrictions.

“I was not in the position of enforcing,” Viganó told LifeSiteNews, “especially because the measures (sanctions) given to McCarrick (were made) in a private way. That was the decision of Pope Benedict.”

Various media outlets have published reports attempting to cast into doubt Viganó and his detailed testimony released August 25 implicating Pope Francis and other top prelates in covering up for McCarrick despite knowing he was a serial sexual abuser of seminarians and priests.

One of the elements of Viganó’s testimony being questioned is whether Benedict, in fact,  had put restrictions on McCarrick after learning about the allegations against the former Washington D.C. archbishop.

An August 29 video produced by the US Bishops’ Catholic News Service (CNS) casts uncertainty on whether Benedict had placed sanctions on McCarrick sometime between 2009 and 2010, as Viganó had said in his testimony.

The video shows clips of McCarrick testifying before Congress in March 2011 on behalf of the USCCB, a January 2012 ad limina visit at the Vatican during which McCarrick concelebrated Mass and met twice with Benedict, and another May 2012 event sponsored by the Pontifical Mission Societies honoring McCarrick at which Viganó had spoken.

Viganó told LifeSiteNews he had already spoken to McCarrick at the time of the latter video clip, repeating the measures that had been taken to him by Pope Benedict, which his predecessor the late Archbishop Pietro Sambi had done as well.

Viganó, nuncio from October 2011 to April 2016, explained he was just beginning his role as the Pope’s representative at the time when each of the events in the various video clips edited together by CNS took place, and just learning the culture and hierarchy of his new assignment in the U.S.

Aside from just beginning in his mission, he said, the nuncio is not somebody who may enforce restrictions directly, especially with a cardinal, who is considered the superior. Such an enforcement would belong to someone in the position of Cardinal Donald Wuerl, Archbishop of Washington, and McCarrick successor, said Viganó.

Another clip from the CNS video showing McCarrick attending an ad limina visit in Rome and meeting Pope Benedict, seems to suggest that the cardinal had no sanctions placed on him. Viganó explained that once again, McCarrick was not obeying the restrictions placed on him and that it was inconceivable for Benedict to take the issue up with the cardinal right then and there with all the other bishops present.

“Can you imagine Pope Benedict, as mild a character as he was, saying, 'What are you doing here?' in front of the other bishops,” Viganó said.

Another clip from the CNS video showing Viganó attending the Pontifical Mission Societies gala along with McCarrick seems to suggest that McCarrick had no sanctions and that Viganó was not anxious in the cardinal’s presence. Viganó told LifeSiteNews that he could neither forego attending the event, nor did he have an opportunity during the event to remind the cardinal of the sanctions.

“I could not say, “What are you doing here?” he said. “Can you imagine? Nobody knows (about the sanctions), it was a private meeting (when they were levied by Benedict). So this video didn’t prove anything.”

Proof of sanctions levied against McCarrick during Benedict’s papacy is not confined to Viganó’s testimony.

A June 2014 Washington Post piece headlined, “Globe-trotting Cardinal Theodore McCarrick is almost 84, and working harder than ever,” highlighted just how ubiquitous McCarrick was after Francis was elected. The report confirmed he’d been sidelined by Benedict, only to re-emerge under Francis.

“McCarrick is one of a number of senior churchmen who were more or less put out to pasture during the eight-year pontificate of Benedict XVI,” the Post piece states. “But now Francis is pope, and prelates like Cardinal Walter Kasper (another old friend of McCarrick’s) and McCarrick himself are back in the mix, and busier than ever.”

The article also includes the previously reported exchange between Francis and McCarrick in which Francis was reported to have joked that the devil wasn’t ready for McCarrick in hell.

The Washington Post story uses the exchange as an introduction to “the improbable renaissance that McCarrick (was) enjoying” under Francis. It says:

“I guess the Lord isn’t done with me yet,” he told the pope.

“Or the devil doesn’t have your accommodations ready!” Francis shot back with a laugh.

McCarrick loves to tell that story, because he loves to tell good stories and because he has a sense of humor as keen as the pope’s. But the exchange also says a lot about the improbable renaissance that McCarrick is enjoying as he prepares to celebrate his 84th birthday in July (2014).

“Sometimes McCarrick’s travels abroad are at the behest of the Vatican, sometimes on behalf of Catholic Relief Services. Occasionally the U.S. State Department asks him to make a trip.”

“But Francis, who has put the Vatican back on the geopolitical stage, knows that when he needs a savvy back channel operator he can turn to McCarrick, as he did for the Armenia trip,” it added.

McCarrick, named a cardinal in 2001, retired in 2006, the Post article recounted, “and was sort of spinning his wheels under Benedict. Then Francis was elected, and everything changed.”

Later in the piece, McCarrick lauds Benedict, and infers that if he’d been asked, he would have done what Benedict wanted “to bring the church back to where he thought it should be”:

“Pope Benedict is a wonderful man, and was a good friend of mine before he became pope,” McCarrick said. “But he was anxious to bring the church back to where he thought it should be, and I guess I wasn’t one of those who he thought would help him on that. I would have obviously done what he asked.”