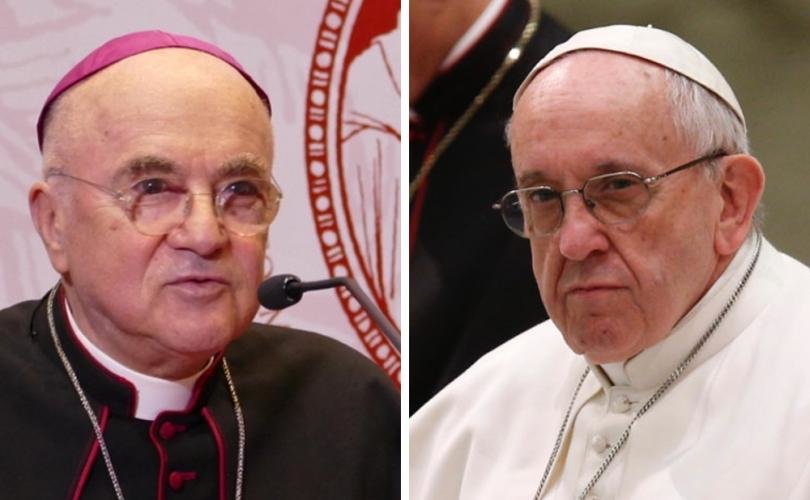 VATICAN CITY, May 31, 2019 (LifeSiteNews) ― Catholic pundits are arguing over whether or not Archbishop Viganò was vindicated by revelations by Monsignor Anthony Figueiredo about sanctions placed on the sexually abusive then-cardinal Theodore McCarrick.

Figueiredo, once McCarrick’s personal secretary, published an eleven-page statement including correspondence from the disgraced now laicized cleric, showing that Church leaders knew about Pope Benedict’s sanctions on McCarrick but did not enforce them. One of those leaders was the former archbishop of Washington, D.C., Cardinal Donald Wuerl. This tallies with Viganò’s 2018 statement that many Church leaders, including Wuerl, knew of the sanctions.

Wuerl continues to insist that he did not know of the sanctions on McCarrick.

Figueiredo’s testimony appeared at the same time the wider world was introduced to a Spanish-language interview with Pope Francis in which the pontiff denied ever knowing of  McCarrick’s sexual misconduct with seminarians. In his testimony, Viganò stated that he had told the Argentinian pontiff about it himself.

John Zmirak, a frequent contributor to The Stream, told LifeSiteNews that Viganò’s testimony about cover-up at the highest levels of the Church is being confirmed.

“Every piece of news that emerges, each new document that’s leaked, confirms the stark truthfulness of Archbishop Viganò’s testimony,” he said via social media.

The dots are being connected, one by one, and they seem to point to Pope Francis. Now we’re expected to believe that Wuerl knew all about McCarrick, but kept it from Pope Francis. As did Viganò, and everyone else who knew. How plausible is that? Must we outrage the rational minds God gave us to keep extending the benefit of the doubt to Francis?

Referring to Pope Francis’s interview with Mexican journalist Valentina Alazraki, in which the pontiff hinted that Archbishop Viganò was “paid” for his testimony, Zmirak continued:

When he accuses Vigano of lying for financial gain, how should we evaluate that grave accusation against a successor of the Apostles? How long will Francis refuse to release the abundant documents which would resolve this question? I for one am sickened by his pretense that he stands like Our Lord, innocent and silent[.]

Damian Thompson, the editor-in-chief of the U.K.’s Catholic Herald, stated on Twitter that there is a rumor that Pope Francis is “becoming isolated” as his denials of knowledge about clerical sex abuse, including by McCarrick, are badly received.

“Sense in Rome that the Pope is becoming isolated as one denial after another is greeted with scepticism (or worse). Much talk of Maradiaga, formerly closest papal ally, now utterly mired in scandal. Francis apparently adopting tactics of Cardinals Wuerl & Farrell re McCarrick,” he tweeted.

Fr. Alexander Lucie-Smith, a frequent contributor to the Catholic Herald, tweeted that Archbishop Viganò was “vindicated.”

“His claim was that Francis lifted McCarrick sanctions. Figueiredo shows sanctions were private, not legal and ignored by everyone incl. Benedict. McCarrick continued in 2013 as before, ‘without any sense of the lifting of sanctions.’”

Lucie-Smith then suggested that Ivereigh was shooting “the messenger.”

In Catholic World Report, author Christopher Altieri said Francis’s denials in this interview with Alazraki made the situation in the Church “worse” but also that Figueiredo’s partial confirmation of Viganò’s testimony made it “better.”

“Pope Francis himself, in a lengthy interview with Televisa’s veteran Vaticanologist, Valentina Alazraki … also offered protestations of ignorance. ‘About McCarrick, I knew nothing,’ Pope Francis said. ‘Obviously,’ he continued. ‘Nothing,’ he repeated, ‘nothing,’ he said again,” Altieri reported.

“Francis also said he could not remember whether the former nuncio to the United States, Archbishop Carlo Maria Viganò, spoke to him about McCarrick when they met in 2013. ‘When [Viganò] says he spoke to me that day — he came — and I do not remember if he told me about this — if it is true or not,’ the Pope told Televisa. Viganò claims Francis asked him about McCarrick,” Altieri continued.

“Even if the former nuncio himself misremembers who initiated the conversation, Francis’s claim is that he can’t for the life of him recall whether his nuncio told him one of his cardinals is a pervert. Let that sink in.”

However, Altieri was heartened by Figueiredo’s decision to come clean on what he knows about the McCarrick cover-up.

“Truth will out,” Altieri concluded.