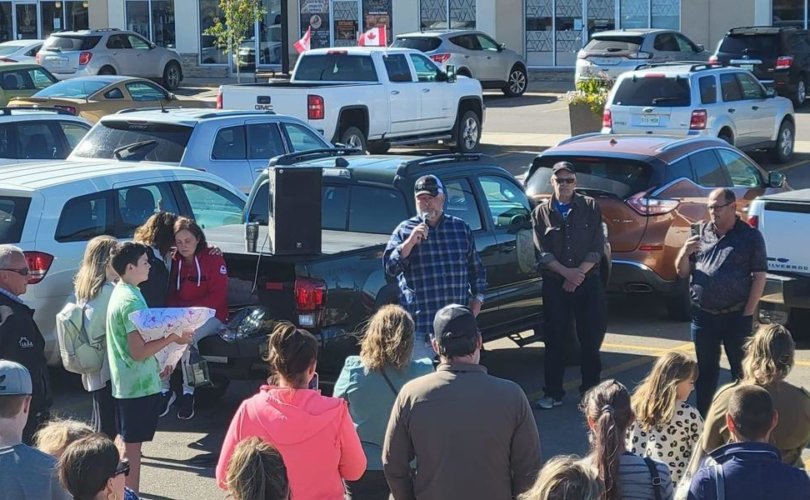 Carol Pearce is remembered at a vigil.Vigil organizers

SASKATOON, Saskatchewan (LifeSiteNews) – A large crowd gathered over the weekend to mourn the death of Carol Pearce, a Canadian woman whose family said she died on September 14 after getting a COVID booster.

The vigil was held outside the Saskatoon Shoppers Drug Mart where Pearce received her COVID booster before dropping dead to the floor.

People left flowers along with notes at a makeshift memorial.

While waiting for the mandated 15-minute post-jab rest period, Pearce “dropped dead before she hit the floor,” according to Shoppers Drug Mart workers.

Pearce had been texting her daughter Stephanie Foster right after she had received the jab.

Foster attended the memorial along with Mark Friesen and Brent Wintringham, who are Buffalo Party of Saskatchewan candidates.

Wintringham noted at the memorial that for a long time some independent media were warning about the dangers associated with the COVID jabs.

“I’m a little bit angry about it because a lot of people saw this coming. We were warning about it. We were not treated very well for what we were saying,” Wintringham said.

“What we need to do is every one of us that Carol Pearce’s memory will not always be in our hearts. And like she did not die in vain.”

In an earlier statement, Foster said her mom had just visited her in the morning on the day she died.

“She was healthy and happy. Her, myself, and her granddaughter were laughing and having a great time! Our last time together. My mom left my house looking amazing! She went to Shoppers for her COVID booster shot. She text me at 12:31 p.m. and said she was waiting her 15 minutes,” Foster said.

“At 12:38 p.m. she was unconscious in Shoppers Drug Mart. I do not believe this was caused from natural causes. My Mom had no health conditions. I believe had she not gotten that COVID shot, then she would be here with us today!”

The government also claims that there have been no deaths associated with the COVID shots in the province.

Saskatchewan independent MLA Nadine Wilson is calling for the provincial government to investigate deaths from the COVID jabs.

Late last week, Wilson said that the government must “open an independent public inquiry into all aspects of how COVID-19 was handled in this province.”

Wilson said the government claiming there have been no deaths from COVID jabs is unbelievable, as data she was privy to shows at least seven deaths.

“[I’m] astonished at the recent report on the CKOM website that there have been no deaths recorded by the government related to [the] COVID vaccine in Saskatchewan,” Wilson said.

According to Wilson, a report she got through a Freedom of Information access request shows there have been, as stated by Saskatchewan Health Authority’s (SHA) data, a total of seven people who have died from the COVID shots.

“There are seven vaccine-related deaths reported according to the Saskatchewan Health Authority’s own information,” Wilson said.

“Are they intentionally trying to hide information the public has a right to know about? It is the duty of government to make sure citizens know what the true risks are.”

Wilson said that promoting the “shots as ‘safe and effective’ while people are acquiring and then suffering from life-altering conditions is disingenuous at best, and potentially criminal.”

“In that report, there are 1,229 adverse reactions documented, many of them life threatening such as Anaphylaxis, Myocarditis, Pericarditis and a host of others. Just as shocking, in many cases, the patients were still scheduled for more boosters even after their reactions. This is not the standard we have allowed for any other vaccine in history,” Wilson noted.

According to data from the government of Saskatchewan, there have been 1,320 adverse reports associated with the COVID jabs.

Of these, 96 have been classified as “serious,” which the government says includes “an adverse event that is life threatening or results in death, requires hospitalization or prolongation of an existing hospitalization, results in residual disability or causes congenital malformation.”