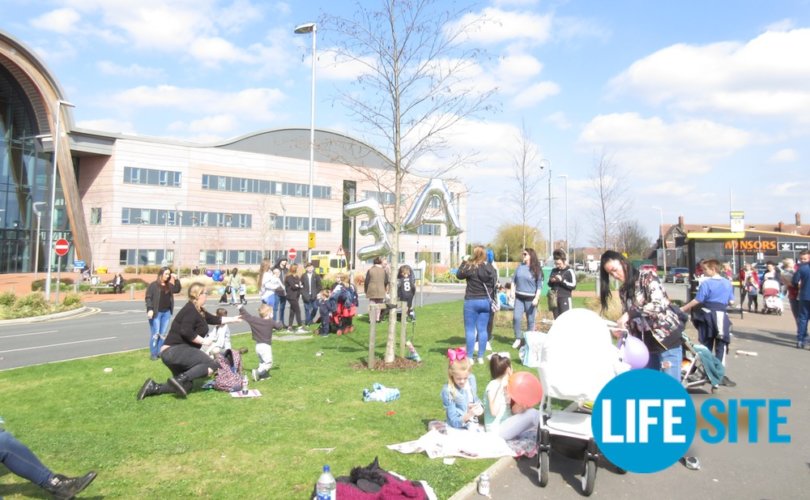 Over a hundred of Alfie’s supporters – most of them touchingly young – stationed themselves outside Alder Hey Children’s Hospital. At 10 PM the atmosphere was almost festive, perhaps because the rain had stopped, or because of the purple balloons people carried or tied to the rails of the park behind.

At that hour Alfie’s family members were nowhere to seen. A young man saying he is Tom Evan’s “best mate” told LifeSiteNews that the family was inside the hospital.

The young people sang pop songs, led by a small group of equally youthful leaders standing behind a banner reading “Alfie = a Life.”  They held their smartphones in the air; a hundred points of light in honour of an infant in danger of institutional death.

“We’re here because we want to fight for Alfie and give him respect,” Taylor Richardson and Faith Shield tell me.

The two girls had been at the park across from the hospital since 6:30 PM. Taylor and Faith said that they tried to come Thursday night, but the road had been blocked by police.

The girls don’t know Alfie or his family personally, but they follow them on social media, including the Alfie’s Army Facebook page.

When a small group began to chant “Oh, Alfie, we love you”, they were swiftly silenced by a young lady with a megaphone. She reminded the crowd that they were not allowed to shout, for fear of disturbing the sick children in the hospital. They were permitted only to sing, and sing they did, assisted by popular hits played over a leader’s phone.

By 11 PM, the quiet rally had disbanded, leaving purple balloons tied to the gates. One was emblazoned with the motto “Alfie’s Army.”

A noisier crowd persisted across the busy street from another side of the hospital. As cars honked their horns in support, approximately 50 people shouted their defiance of a new restriction on Alfie’s visitors. In a call-answer format, they sang, “Alfie needs his mommy, his mighty mighty mommy!”

Alfie Evan’s aunt Georgina told LifeSiteNews that Kate James, Alfie’s mother, had been asked to leave the hospital a couple of hours before, at about 9 PM.

Hitherto, Alfie’s parents had been permitted to sleep in his room. In response to their attempt to remove Alfie on Thursday, and the massive protest that followed, the hospital forbade the couple from sleeping in the room and restricted Alfie’s daily visitors to his parents and two other “named and identified” people.

Georgina said she completely disagreed with the hospital’s decision, saying that Alfie had a very large and close-knit family. Alfie’s father Tom Evans is one of nine siblings, and Kate James also comes from a big family.

One of the supporters, a mother of seven named Yvonne, praised Evans and James for their fight to continue Alfie’s care.

“Any parent would do this for their children,” she said.

Friday was a festival day in the Liverpool calendar: Ladies’ Day at the Aintree races. But although the railway station was busy with women in fancy hats and men in impressively cut suits, Alfie is not far from the minds of his fellow Liverpudlians.

“It’s very sad,” said the cab driver who dropped me off near Alder Hey. “They should give the kid a chance.”

He said that there’s a lot of feeling in the city about Alfie Evans and his parents’ fight to keep him alive.

“He’s one of our own,” said the cabbie. “I think everyone in Liverpool is praying for that kid.”

A candlelight vigil was also held Saturday outside Alder Hey from 3:00 PM to 7:00 PM.