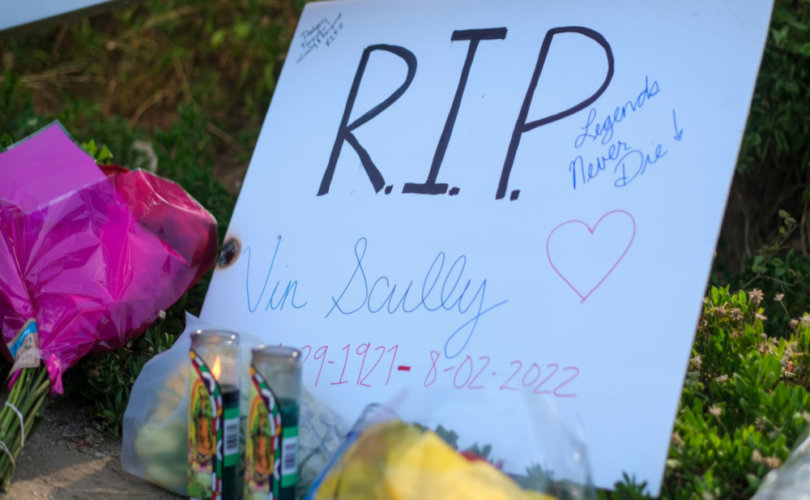 Flowers, candles and messages are displayed at a memorial to honor the late broadcaster Vin Scully at Dodger Stadium in Los Angeles on Wednesday, August 3.Shutterstock

(LifeSiteNews) – Vin Scully, a beloved figure known to baseball fans as the longtime voice of the Dodgers – and known to Catholics as a man devoted to his faith – died at his California home on August 2 at age 94.

Fans who grew accustomed to his voice in childhood, now mourning his loss, offer a variation on a single theme, “The fact that you can cry for a man’s death whom you never met but felt like you knew him your entire life is a beautiful thing.”

“I confess I’m pretty much a bystander to baseball. I feel tied to the Dodgers in spirit, and from birth, even though I can’t tell you anything about the team today — or even yesterday — in terms of their records or statistics. Nevertheless, the voice of Vin Scully is in my blood,” wrote The Federalist’s Stella Morabito in 2014.

“It came through a virtual transfusion from my father,” Morabito explained.  “From childhood I’ve retained an auditory collage of memories of Scully’s voice on the radio: narrating the game, doing ads for the sponsors, and filling the quieter moments with stories, mostly about the players.”

“I heard Scully’s voice so many hundreds of times as a kid that the sound of it never fails to bring to mind my hard-working father in his stolen moments of relaxation,” she added. “Scully’s announcing gave him a lot of joy as well as solace from some hard times and the ongoing disappointments in life.”

A moving 10-minute video tribute to Scully produced by MLB Network can be watched here.

For 67 years, beginning in 1950 in Brooklyn, New York and then in Los Angeles from 1958, “Scully was the voice to multiple generations of baseball fans, using his soothing voice to weave in stories of ballplayers while providing the play-by-play,” noted Fox News sports reporter Joe Morgan.  “He called 25 World Series, Hank Aaron’s 715th home run, 20 no-hitters and three perfect games, allowing fans outside of LA to realize his greatness.”

While tributes to Scully the broadcaster have poured in from all over the world for the “poet-philosopher of baseball,” Scully the Catholic is being remembered as a man of faith and action.

“Scully was a devout Catholic who found in his faith a source of joy and comfort and sought to share it with others through personal kindness and philanthropy,” Catholic News Agency’s Jonah McKeown wrote.

Devoted to the Virgin Mary, in 2016 Scully narrated a two-CD audio recording of the Most Holy Rosary of the Blessed Virgin Mary, a collaborative work between Catholic Athletes for Christ (CAC) and Immaculate Heart Radio.

CAC president Ray McKenna, remembered Scully as having “never said ‘no.’ His response was always, ‘Whatever you need.’ He supported our efforts to increase a Catholic presence in professional sports, including his willingness to record [the Rosary CD] that has helped bring so many people to the Rosary and advance CAC’s mission. We will miss him greatly and always treasure our friendship with him.”

Working with CAC, Scully also played a role in bringing pregame team Masses to Dodger Stadium in a room adjacent to the Dodgers’ clubhouse that was dubbed the “Vin Scully and Billy DeLury Chapel.” DeLury was the team’s traveling secretary and had been a close friend of Scully’s since their days with the Dodgers in the 1950s.

Scully often served as a lector at the Masses.

In 2009, he received the Archdiocese of Los Angeles’ Cardinal’s Award, which recognizes “the selfless, self-effacing and talented people” of the archdiocese.

Scully was a man whose faith intensified when faced with personal tragedy. His wife Joan died of an accidental overdose in 1972, leaving him to raise three small children on his own. In 1994, son Michael died in a helicopter crash, and his second wife, Sandra, died in 2021 after a long struggle with ALS, more commonly known as Lou Gehrig’s disease.

— Article continues below Petition —
Send prayers for Archie and his parents after 12-year-old's life is ended
Show Petition Text
12704 have signed the petition.
Let's get to 15000!
Thank you for signing this petition!
Add your signature:
Show Petition Text

“When my wife, Joan, died in 1972 at the age of 35, I was devastated, as were our children,” recalled Scully in a 2013 interview. “We didn’t stop praying, though. The worst thing you can do in times of trial is to stop praying. The tough moments are when you need God the most. He’s always there and more than happy to give us His help; we need only ask for it.”

“There are so many good things about the church, but that might be the most essential thing I’ve learned from it: the importance of continual communication with God,” he continued. “That’s what all the kneelers, candles, incense, stained-glass windows, holy water and other things are about: directing our minds and hearts to God.”

“Being Irish, being Catholic, from the first day I can remember, I was told about death,” Scully said in 1986. “Death is a constant companion in our religion. You live with it easily; it is not a morbid thought. That has given me the perspective that whatever I have can disappear in 30 seconds. And being out on the road as much as I am, I realize I am killing the most precious thing I have — time. You never know how much of it you have left.”

“Scully’s skills as a broadcaster, and as an orator more generally, were shaped by his Catholic education,” McKeown explained. “After receiving his elementary school education from the Sisters of Charity, he graduated from Fordham University in 1949, having majored in communications. While at Fordham, Scully took a seminar class on eloquentia perfecta, a hallmark of Jesuit education, which relates to the art of writing and speaking well.”

“Every great city has sounds to it,” said former infielder Steve Garvey in an MLB Network discussion. “And Los Angeles has had one, clear sound and that’s been the voice of Vin Scully all these years.”