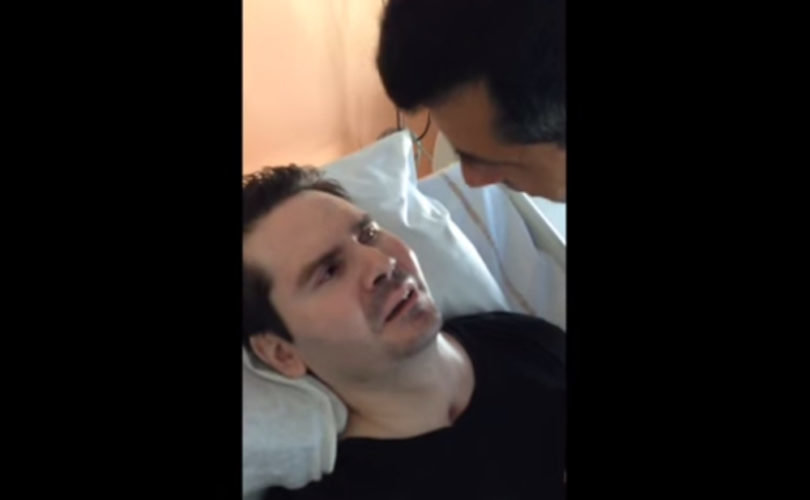 REIMS, France, July 9, 2019 (LifeSiteNews) — There is no longer any hope for Vincent Lambert, France’s Terri Schiavo. After six days without food and five without fluids — except for the sedatives and painkillers being administered to a man who is purported to have no consciousness of the world around him or of his own body — damage to his vital organs has become “irreversible.” He may still live for a few days, perhaps even a week. But on the pathway to death on which he was placed for the third time last Tuesday, Vincent has passed the point of no return.

In a heartbreaking statement published this Monday by those members of his family who have fought so bravely for Vincent’s life and for his transfer to a specialized unit in which his handicap and severe brain damage would have been properly addressed, Pierre and Viviane Lambert, his parents, and David and Anne, two of his siblings, announced that there would be no more legal action.

Dear friends who have supported us so strongly throughout these six years,

This time, it is finished. These last days, our lawyers have continued their legal action and carried out ultimate actions to ensure that the suspensive appeal benefiting Vincent at the UN be respected. To no avail.

Death is now inevitable. It was imposed on him as well as on us. While we do not accept it, we can only resign ourselves, in sorrow and with incomprehension, but also in Hope.

We all wanted to thank you for your friendship, love, support and prayers over the years. There is nothing more to do but to pray and accompany our dear Vincent, in dignity and silent prayer. By thought and prayer you are all close to us, with Vincent.

We ask the journalists present in front of the CHU to have the decency to respect our family intimacy in these sorrowful moments.

Their lawyers, Jérôme Triomphe and Jean Paillot, also published a short communiqué acknowledging that they had no more legal options. Last Friday, their last-ditch appeal to the administrative tribunal of Châlons-en-Champagne was rejected.

They also filed a complaint, on the same day, against Dr. Vincent Sanchez, who initiated the end-of-life procedure last week, for “attempted murder with premeditation.” According to mainstream French media, Sanchez was heard by the police in Reims last weekend. But whatever becomes of this lawsuit, it will be too late for Vincent Lambert.

All through last week, we have taken many ultimate actions to try to ensure that the suspensive appeal benefiting Vincent at the UN be respected. We no longer have any recourse and it is now too late. Vincent is dying. The situation Dr. Sanchez put him in is now medically irreversible. These moments are very sorrowful for everyone.

The time has come for silent prayer, together with the whole family, out of respect for Vincent and his surroundings.

There will be no further statements.

The two lawyers took up Vincent’s cause from the start in April 2013, marking their first victory by forcing the Reims university hospital where he lies in a geriatric and palliative care department to feed and hydrate him after a full 31 days without food and only 500 mL of water per day.

Thirty-four legal decisions later, in a battle that added six years to the life of Vincent, who was severely handicapped by a road accident but needed no special treatment, the end-of-life procedure to which he has been submitted is more efficient and calculated to kill fast.

Would Vincent have wanted to die the cruel death to which he has been subjected? Who could possibly want to die such a death, in which a patient’s vital organs are deliberately brought to fail through lack of hydration? Who would want a seven-day agony, and more, without nursing staff being allowed to relieve thirst? Even condemned prisoners are given to drink when led to the place of their execution.

During these terrible days, Vincent Lambert received visits organized by his legal guardian, his wife Rachel, who has been favorable to his death since the implementation of the first end-of-life procedure, interrupted in May 2013 after 31 days of interruption of nutrition and minimal hydration.

What is striking, when the supporters of his death appear on French TV screens, is their dismay. This suggests that the vision of a slow, deliberate death of thirst and hunger is deeply shaking.

François Lambert, Vincent’s half-nephew who has initiated several legal actions to obtain the legal killing of his uncle, Monday condemned the duration of this allegedly chosen death process. “This is a body that will slowly die over two weeks without hydration and food,” he said Monday on RTL Radio. He spoke of a “body” that is going to die, not of a person.

But through whose fault? Are the parents responsible, because they filed a complaint? Is it the health authorities, or even the Leonetti “end-of-life” law itself, as François Lambert would have it? If there is sadism at work — and François insists on that point, affirming: “I want to say, unfortunately, it is not a euthanasia; otherwise, it would go faster, indeed, it would be a little less sadistic from my point of view” — it is because of the will of those who for six years have been calling for Vincent’s death.

Those who fought for his life have underscored the cruelty and inhumanity of death by deprivation. The head doctor of a clinic in Montpellier, Vincent Brun, while personally in favor of the principle of euthanasia, declared to the local press shortly after the end-of-life procedure was aborted on May 20:

With Vincent Lambert, we are not dealing with a problem of the right to die with dignity. We're talking about his life, not his death. So where is dignity? When you kill someone, you say so. For me, it’s euthanasia. What Vincent Lambert was subjected to, the stopping of care, I would not do to my dog.

Marie-Geneviève Lambert, Vincent’s older sister who favors his death, told a journalist on Monday: “Watching this death firsthand is a terrible situation. Besides, it’s a bit guilt-inducing, when it’s just that we can’t do otherwise,” she said, with tears in her voice.

Her emotion was certainly real, but it missed out on what so many specialized doctors have said in the case of people like Vincent Lambert who have a low level of consciousness: in a proper structure, where his parents wanted him to be transferred, it would have been possible to have good care and a “life project,” in conformity with a 2002 French law on the treatment of handicapped persons.

The pro-euthanasia “Die with dignity movement” (Association pour le droit de mourir dans la dignité, ADMD), which is calling for a full-fledged euthanasia law, has taken up the case to demand a further step toward the voluntary elimination of human beings in the name of patient autonomy. “So are no media wondering about the fact that it has already been 6 DAYS since we stopped Vincent Lambert’s nutrition and hydration? Doesn’t this practice of slow death make anyone worry?!” said a message on the ADMD’s Twitter account.

Clearly, Lambert’s predicament and death are being used to further the euthanasia agenda in France.

Euthanasia remains illegal in this country, but since 2005, when the first end-of-life law was adopted under the patronage of legislator Jean Leonetti, stopping nourishment and, in a certain measure, hydration is legal for patients who are not necessarily at the end of their lives but considered as not having lives worth living.

Since 2016, a new law has been adopted, in particular because Vincent Lambert had gained a reprieve after his parents’ lawyers fought the application of the Leonetti law to his particular situation. Now administration of food and fluids directly to the stomach has been officially defined as a medical treatment that needs to be stopped when a doctor considers that a patient is being subject to “unreasonable obstinacy” on the medical level. These “treatments” are allowed to be stopped, provided they are accompanied by deep sedation so that the patient is at no risk of feeling pain or thirst.

According to one of the specialized doctors who accompanied Viviane and Pierre Lambert through their legal battles, however, Vincent has not even received sufficient sedation.

The Catholic bishop of Montauban in the South of France, Bishop Bernard Ginoux, has published several messages over the last days making clear that Vincent is being killed.

“#Vincent Lambert. Nothing can justify this death that is coming little by little. It’s a murder scheduled by doctor’s orders. It’s barbarism on its way,” he wrote on Twitter last week.

“#Vincent Lambert is dying little by little; he is being killed by inhuman powers. As a hospital chaplain, I have seen sublime last moments. His end is a martyrdom,” he added this Monday.