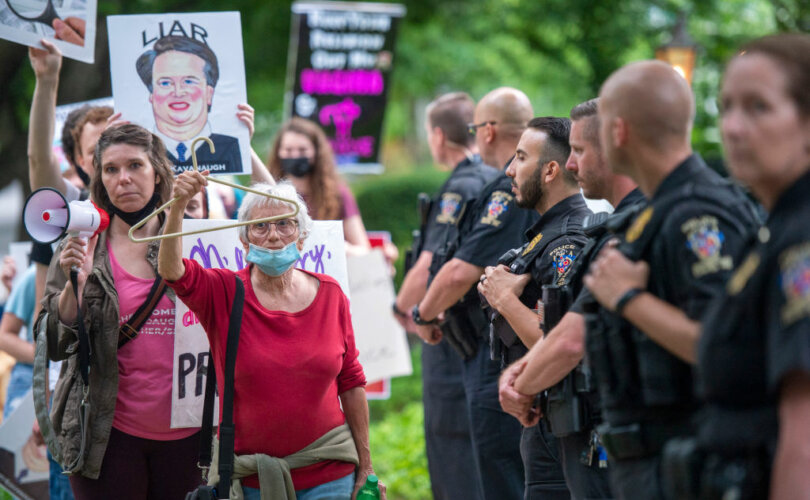 Police officers look on as pro-abortion activists hold a demonstration outside the home of U.S. Supreme Court Justice Brett Kavanaugh on May 18, 2022, in Chevy Chase, MarylandPhoto by Bonnie Cash/Getty Images

(LifeSiteNews) — Pro-life individuals and organizations have been targets of violence at a significantly higher rate than their pro-abortion counterparts in the wake of the Dobbs decision.

On October 31, the Crime Prevention Research Center (CPRC) released a list of cases across the United States, outlining violence against both pro-life and pro-abortion groups. Despite mainstream media coverage focused on the abortion advocates, the information gathered proves that pro-lifers experienced threats and violence in far greater numbers.

The study consisted of different sources including news searches and an attempt to gather information on “additional cases” from pro-abortion organizations. These groups “refused to respond” to the requests “despite efforts over three weeks.”

“The bottom line is that after the Dobbs decision was leaked, there was over 22 times more violence directed against pro-life groups than pro-choice organizations,” the report continues.

“However, if the media is less likely to cover violence [against] pro-life organizations, the 22 times estimate will underestimate the relative violence against these groups.”

READ: House Republicans demand answers from Dept. Of Justice on FBI’s use of force in Mark Houck arrest

According to the study, the U.S. Department of Justice (DOJ) maintains a list of “recent cases on violence against reproductive healthcare providers.” However, “it doesn’t collect similar data for cases against pro-life centers.” The study sought to compile “extensive news searches and contacted various organizations on both sides of the debate.”

A research associate from the CPRC reportedly contacted the National Abortion Federation (NAF) to gather information on “violence and disruption against abortion providers.” This organization redirected the researcher to the DC Abortion Fund (DCAF).

“I emailed the NAF and DCAF seven times between October 10th and October 25th,” the researcher wrote. “As of October 31st, while I got automated responses indicating they had received the messages, I never received any further response.”

“We felt it was important to identify and read each case to ensure they were comparable.”

The researcher explained that he/she tracked down violence against both sides by searching with “keywords such as ‘anti-abortion attacks,’ ‘attacks on abortion providers,’ ‘violence to abortion clinic,’ ‘pro-abortion attacks,’ and ‘attacks on pregnancy centers’.” However, a majority of the search results were “related to the cases that happened last year or earlier.”

The NAF released its “2021 Violence and Disruption Statistics” report in May, but “it only provided summary statistics and not a list of the cases upon which the report was based.” No stories which covered the 2021 report offered any reference list either. The National Abortion Rights Action League (NARAL), another resource of the researchers, did not collect data after 2016.

Despite the lack of evidence to prove attacks against pro-abortion individuals and organizations, “the media has uncritically accepted pro-choice claims of violence without asking for a list of cases,” the study asserted.

The CRPC included a comprehensive list of all reliably reported attacks on both pro-life pregnancy centers and individuals as well as pro-abortion organizations which took place in the United States. A May 2 incident in St. Louis, Missouri was the first recorded violence since the leaked majority opinion. In this event, a memorial display for children killed in abortion, organized by a local Students for Life chapter, was vandalized. The most recent act of violence was a September 27 case of vandalism at a Catholic medical center in Colorado.

The earliest reliable report of violence against pro-abortion groups was on May 25, when a “woman in a hooded shirt set a fire” at an abortion clinic in Wyoming. The most recent incident was a woman leaving a dead raccoon outside the door of an Ohio clinic on August 15.

Although there is substantial evidence of pro-abortion violence, little has been done to respond to these crimes. In September, the Federal Bureau of Investigation (FBI) verified an ongoing investigation into attacks on pregnancy centers, many of which were claimed as actions of the pro-abortion extremist group Jane’s Revenge. However, the FBI also refused to disclose whether they had made any arrests connected to violence against pro-life centers.