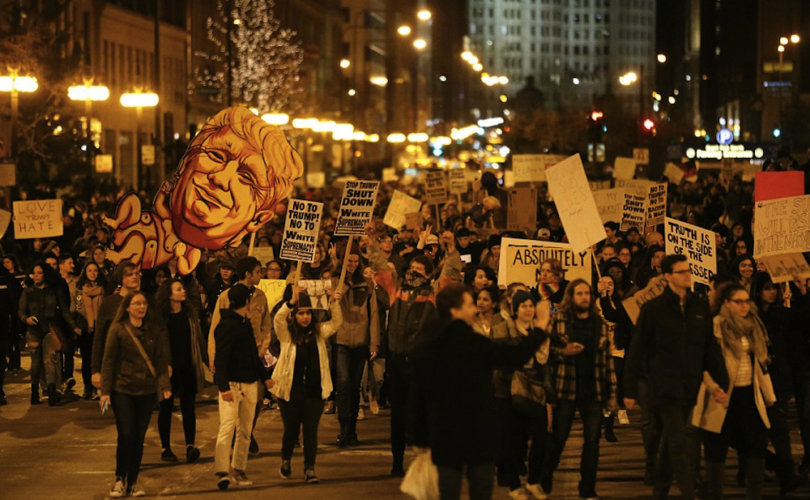 Clinton had told supporters in her concession speech on Wednesday to give Trump the chance to lead, saying she has offered to work with him on behalf of the country and that she hoped he would be “a successful president for all Americans.”

“Donald Trump is going to be our president,” Clinton stated. “We owe him an open mind and the chance to lead. Our constitutional democracy enshrines the peaceful transfer of power.”

Still, some of her supporters responded to the Trump win with what they largely ascribe to the president-elect: hate.

Rallies with tens of thousands reportedly taking part have been reported in at least 16 cities, about half of those in California, and the unrest has centered mainly in electoral areas that went to Clinton in the election. Among the cities with protests and riots have been New York, San Francisco, Oakland, Los Angeles, Seattle, Portland, Austin, Chicago, Boston, and Philadelphia.

The protests have often turned violent with vandalism, fires, attacks on police and arrests. Black Lives Matter signs and chants were also among the protests, along with other liberal and socialist groups.

In some cases, police had to move in formation on protesters as situations became violent.

“F*** Trump” and “Kill Trump” graffiti was marked on a block in Oakland before being set on fire, the Daily Mail reports, where more than 6,000 were part of what became one of the most violent protests.

In Los Angeles, protesters blocked a freeway, started fires and waved Trump heads on sticks outside City Hall. Protests stopped traffic in other cities as well.

Celebrities Cher, Madonna and Lady Gaga joined in the New York protests, with one protester announcing on Facebook that Cher had told him “we have to fight,” and Madonna posting footage on her Instagram feed of crowds chanting “Not my President!”

The American flag was burned as well.

The Secret Service took at least one protester away from the Washington, D.C. protests outside the White House.

A video has been released that shows a mob of young black men and women in Chicago beating an older white man because he voted for Donald Trump, yelling “You gonna pay for that s**t,” and “beat his a**” during the attack.

A Latina woman from Los Angeles told CNN that “people have to die to make a change” during a California riot.

The fans were flamed by George Soros-funded liberal activist group MoveOn.org, which called for rallies on Wednesday night to “affirm rejection of Donald Trump's bigotry, xenophobia, Islamophobia, and misogyny.”

“This is a disaster. We fought our hearts out to avert this reality. But now it’s here,” the group’s staff wrote to supporters on Wednesday, according to Breitbart.

The email said Trump and his prominent supporters have “targeted, demeaned, and threatened millions of us,” and lamented the GOP retaining both Congressional chambers in the election.

“We are entering an era of profound and unprecedented challenge, a time of danger for our communities and our country,” it stated. “In this moment, we have to take care of ourselves, our families, and our friends — especially those of us who are on the front lines facing hate, including Latinos, women, immigrants, refugees, Black people, Muslims, LGBT Americans, and so many others. And we need to make it clear that we will continue to stand together.”

One of New Orleans’ most famous monuments was defaced with anti-white graffiti in one of the protests, Breibart reported, with “Die whites die,” “Black Power,” and “Dismantle White Supremacy” scrawled on Lee Circle, along with, “F**k Trump.”

An effigy of the president-elect was burned as protesters smashed glass windows at an adjacent bank.

Protesters planned a third night of unrest on Thursday, The Guardian reported.

Protests had broken out at Trump rallies during the campaign with dozens of people injured. And while the media and liberals tried to assign blame for the violence to Trump because of his tendency toward incendiary rhetoric, it was later learned from undercover videos that the protesters were paid by Democratic Party staff to cause the violence at the rallies.

Some in western states, the blue states of California, Oregon and Washington, are calling for secession on social media, including some Californians promoting #Calexit.

One tweet read, “Racism, sexism, queerphobia, transphobia, classism, ableism. If all of this makes American 'great' again, then we are not America. #CalExit.”

Calls for Trump’s assassination erupted on Twitter, with some tweets saying Trump’s running mate Mike Pence should be murdered as well.

One tweet stated, “I just pray that the first ni*** who tries to assassinate Donald Trump don't miss,” and another said, “if someone wants to take one for the team and assassinate trump make sure to get pence's a** as well.”

While reports have not yet surfaced of the Secret Service following up on the threats, the agency had been responding to tweeted threats toward Trump during the campaign.

Agents had rushed the GOP candidate off the stage during at least two rallies after a threat from a protester became evident.

The Federal Aviation Administration (FAA) established a no-fly zone this morning, effective immediately, over midtown Manhattan, including the Trump Tower, until the day after the inauguration.

The New York Police Department and the Secret Service had to beef up security in front of the skyscraper where the president-elect’s residence is located on Wednesday, a report from NBC New York said.

The NYPD is controlling foot traffic, protesters and Trump supporters. The media are cordoned off in pens, and security screens have been put up at the building’s entrances to protect the identities of those accessing the building.

The two agencies are coordinating efforts. NYPD is managing crowd control and the Secret Service is handling Trump’s personal security.

Trump won the election in a stunning victory officially called early Wednesday morning, after months of presumption by media and pollsters that Clinton would prevail.