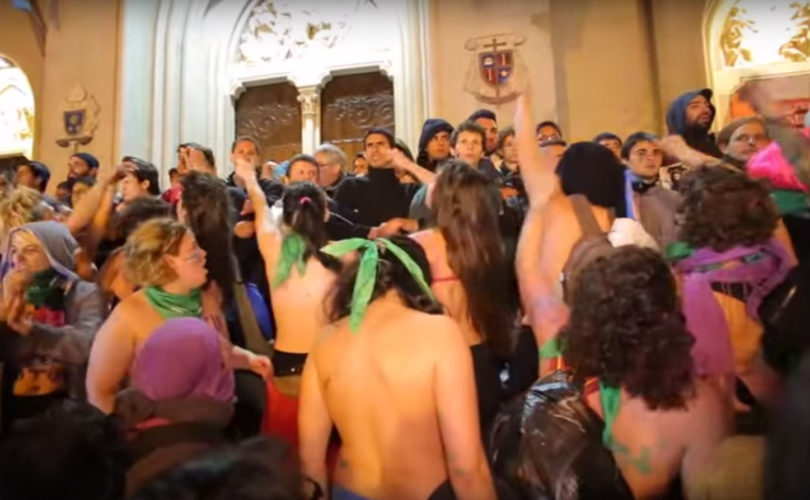 WARNING: The video footage included below is shocking and contains violence and censored nudity. Viewer discretion is advised.

Such violence is becoming the norm for the annual March for Women in the Pope's native land of Argentina, although this year's violence seemed to be the most extreme yet, with the women turning their violence against the police, and even attempting to set the Cathedral on fire.

The women tore down the outer gate of the cathedral and hurled glass bottles and feces at the young men standing guard. When they  attempted to burn down the Cathedral the police began taking measures to  disperse the hordes.

The local group Argentinos Alerta, which helped to organize the peaceful vigil in anticipation of the attack, issued a statement in which they thanked the police for dispatching forces to the Cathedral. The group noted that it was the first time that the police had made an effort to defend church property.

While similar protests have occurred recently in conjunction with the Annual March for Women, the level of violence appears to be increasing.

“There were very tense moments and when I arrived I witnessed families with young children crying trapped inside the church. It was a terrible thing,” stated Marcelo Di Pasqua the local chief of police in an interview with local TV.

A similarly disturbing video from the 2013 March for Women shows groups of women spray-painting the crotches and faces of groups of praying men linked arm-in-arm to protect the Cathedral, and using markers to paint their faces with Hitler-like moustaches. They also performed obscene sexual acts in front of them and pushed their breasts onto their faces, all the while shouting “get your rosaries out of our ovaries.”

Meanwhile, after this year's event, the national press such as Clarin described the event as one of police brutality, highlighting only the fact that the police had to disperse the mob, barely describing the violence of the pro-abortion hordes.

In a press release “Catholics for a Free Choice” issued a statement repudiating the police for police brutality against the women.

The graphic videos show a completely different story, with the police and prayer warriors under constant assault from the radical feminists.

While the police and faithful came out bravely to defend the church form the aggressors, putting their bodies in the way of the hordes, it appears that the local Church hierarchy is not willing to do the same.

Father Gabriel Mestre, the Vicar of the Cathedral, stated that “one has to accept the dynamic and the dissent , and in fact in the Church we have to accept it because I think that more than half is in favor of legal abortion, and for that there are proper avenues, within a pluralistic and democratic society to generate policies which each from his ideological frame of reference considers as an appropriate way to progress, just like happened with ‘marriage’ equality or with divorce.”