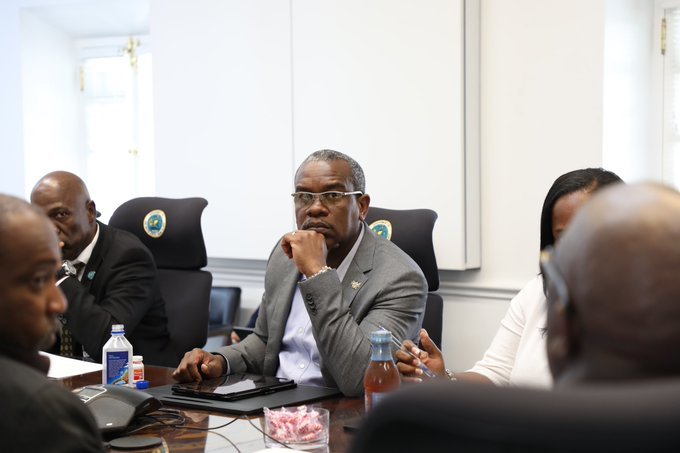 CHARLOTTE AMALIE, U.S. Virgin Islands, June 10, 2020 (LifeSiteNews) – The governor of the U.S. Virgin Islands, a territory of the United States in the Caribbean, has expressly prohibited Catholics from receiving Holy Communion during Mass as the coronavirus lockdown lifts.

“No communion is allowed during Mass. Parishioners are not to partake in receiving communion wafers or wine at this time,” wrote Gov. Albert Bryan Jr., a Democrat. His official “Coronavirus (COVID-19) Guidance for Re-opening Houses of Worship for Services” was issued June 1.

“We recognize that congregational worship is a very important part of the lives of many, but the life and safety of your congregants is at stake,” Bryan stated. “The only way we can contain and mitigate the impact of COVID19 is by aggressive social distancing.”

He ordered all faithful to wear a mask when attending a worship service. The only exception are those under two years of age.

Also, he wrote that congregants “must be 6 feet apart from one another.” There is no exception for families who live in the same home.

The maximum occupancy of any facility used for worship services is 50. The governor does not allow for larger gatherings in larger buildings, even if social distancing measures would be kept.

Funerals can only be attended by no more than 50 immediate family members at a time. “Immediate family,” the guidance declared, “is defined as spouse or partner, children, parents, and grandchildren.”

Greg Dougherty, a seminarian with the local diocese of St. Thomas, delivered a letter to Bryan that was obtained by LifeSiteNews in which he educated the governor, who was raised Catholic, on the importance of the Eucharist.

“As a Catholic you are aware that the primary function of a priest is to make the Sacraments available to the faithful,” Dougherty wrote. “The source and summit of the Sacramental life of the Church is the Holy Eucharist where Christ is truly present in Body, Blood, Soul, and Divinity. The chief fruit of the Eucharist, according to Catholic doctrine, is unity with Christ and His Church.”

“Catholics in good standing with the Church are not to be denied Communion,” he continued, quoting from Scripture: “Amen, amen I say unto you: ‘Except you eat the flesh of the Son of man, and drink his blood, you shall not have life in you. He that eateth my flesh, and drinketh my blood, hath everlasting life: and I will raise him up in the last day.’”

Dougherty called the ban on Holy Communion “both unjust and unwarranted. People are more at risk riding a Safari, buying groceries, going to the dentist, etc., than receiving Communion. I feel that your ban is an attack on Christ Himself, the Holy Catholic Church, and our First Amendment rights.”

“After hearing of your ban, I felt called to begin a strict fast on Friday, June 5th in reparation for being denied Communion,” he concluded. “My fast will continue until the ban is lifted. It is my prayer that common sense will prevail and that respect for religious liberty is restored in these Virgin Islands and throughout America. May God bless you and the Virgin Islands.”

The governor of the U.S. Virgin Islands prohibiting the faithful from receiving Holy Communion is perhaps the most high-profile attack on the natural right of Catholics to worship God as he wants to be worshiped.

As several states are opening up again after the lockdown, Howard County, which is located between Baltimore and Washington, D.C., issued a very restrictive executive order on May 26.

Anthony Fauci, the director of the National Institute of Allergy and Infectious Diseases and one of the key members of the White House coronavirus task force, told America Magazine on May 26 that churches should adopt “common sense” measures to protect the faithful.

For Fauci, “common sense” includes prohibiting the reception of the Eucharist. “I think for the time being, you just gotta forestall that.”

After the Archdiocese of Baltimore expressed its “serious concerns,” the county promised the prohibition would be removed and that faith leaders would be consulted on future guidelines related to churches and other sites of worship.

Recommended by the United States Conference of Catholic Bishops, guidelines prepared by the Thomistic Institute for restarting public Masses made clear that receiving Holy Communion directly on the tongue is possible “without unreasonable risk.”

The guidelines specifically referred to Redemptionis Sacramentum, an Instruction published by the Congregation for Divine Worship and the Discipline of the Sacraments in 2004. According to the document, “each of the faithful always has the right to receive Holy Communion on the tongue.”