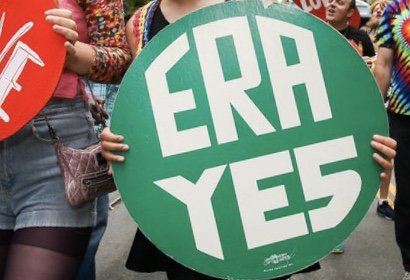 The Equal Rights Amendment (ERA) has been a feminist goal for nearly a century. If passed, the ERA would prohibit discrimination based on sex and become a part of the U.S. Constitution, but could also constitutionally protect abortion. While opponents claim that Virginia’s ratification is merely symbolic, feminists are suing in federal court to force its adoption to the Constitution.

The Democrat-controlled Virginia House passed the resolution in an 59-40 vote, with five Republicans voting with the majority, and it passed in the state senate 28-12. In the latter case, seven Republican senators voted for the measure.

In November, the Democrats took over as the majority party in the Virginia state legislature thanks to campaigning by feminist and pro-abortion activists. But while feminists and liberals are celebrating their legislative victory, it is not yet clear whether the vote will have an effect beyond the merely symbolic.

The executive director of the pro-life Eagle Forum, Anne Schlafly Cori, told LifeSiteNews that the real purpose of passing the ERA is to underscore abortion rights.

“There is only one reason why the ERA is brought up for ratification today, and that it is to put abortion rights into the Constitution,” she said.

Cori said ERA proponents are afraid that the current makeup of the U.S. Supreme Court “will chip away at Roe v. Wade (the 1973 decision allowing abortion nationwide), and they see the ERA as an end-run around to secure abortion rights.”

As evidence, Cori cited state supreme court decisions in Connecticut and New Mexico that ruled  similar ERA language in the constitutions of those states requires taxpayer-funded abortions. She pointed out that the U.S. Department of Justice has resolved that the votes in favor of ERA in state legislatures and U.S. Congress nearly 50 years ago no longer apply. Cori said, finally, that proponents of the bill know that the Virginia victory is purely symbolic.

In 1971, with support from three presidents and both major parties, the ERA proposal was approved by the U.S. House of Representatives, and the Senate approved the measure in 1972. It was then submitted to the state legislatures for ratification. However, because of opposition from pro-life and conservative activists such as Phyllis Schlafly (the mother of the current leader of the Eagle Forum), five state legislatures rescinded their ERA ratifications. It was thus that the feminists’ goal of ratification by the required two-thirds of the states was frustrated.

The Virginia vote, while it makes the state the 38th and final state required for ratification, is probably not the last word on the controversial ERA. While ERA proponents contend that the 1979 deadline and 1982 deadline extension for ratification need not be observed, the Trump administration disagrees.

The Office of Legal Counsel of the Justice Department opined that debate over the amendment should return to the political sphere. In the opinion penned by Assistant Attorney General Steven A. Engel, “The ERA Resolution has expired and is no longer pending before the States.” The only way forward for the ERA, it said, is to restart the process from the beginning with votes in the U.S. House and Senate, and a constitutional convention sought by two-thirds of the states.

In addition, three states — Alabama, Louisiana and South Dakota — filed a lawsuit in Alabama in December to prevent the archivist of the United States from certifying the ratification of the ERA to the Constitution and to acknowledge that five states rescinded their ratifications and should not be counted. In an interview with NPR, Alabama Attorney General Steve Marshall affirmed, “The opportunity to pass the Equal Rights Amendment has long since passed. And if Congress wants to do it and the states want to do it, they need to restart that process again.”

Currently, the Archivist of the United States is David Ferriero, who was appointed by former President Barack Obama in 2009 to manage the National Archives and Records Administration.

Democrats and feminists are apparently undeterred by findings made by the U.S. Department of Justice. A pro-ERA advocacy group, for example, is suing in a federal court in Boston to invalidate the 1982 Congressional deadline that had been attached to the ERA, ignore the states that rescinded their ratifications, and force archivist Ferriero to certify the ERA as ratified.

“Section 1. Equality of rights under the law shall not be denied or abridged by the United States or by any State on account of sex.

“Sec. 2. The Congress shall have the power to enforce, by appropriate legislation, the provisions of this article.

“Sec. 3. This amendment shall take effect two years after the date of ratification.”