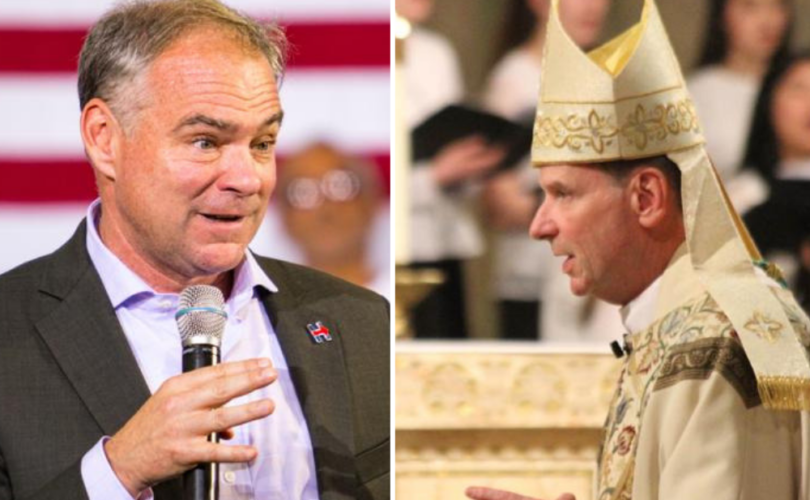 VIRGINIA, February 28, 2019 (LifeSiteNews) – Virginia’s two bishops issued a terse statement condemning the commonwealth's senators who voted against the Born-Alive Abortion Survivors Protection Act, a bill which would have protected children born alive during botched abortions from being left to die.

Bishop Michael F. Burbidge of Arlington and Bishop Barry C. Knestout of Richmond joined together to say they are “deeply dismayed and astounded” that Sen. Mark Warner and Sen. Tim Kaine – who often describes himself as a traditional Catholic – failed to support the bill preventing newborns from being allowed to die.

“That this bill did not pass unanimously – let alone even pass at all – is appalling and beyond comprehension,” declared the Virginia bishops.

“We are dismayed and outraged that Virginia’s U.S. Senators Warner and Kaine voted against this critical lifesaving legislation,” added the prelates.

“So let’s talk about abortion and choice,” said Kaine. “[Mrs. Clinton and I] support Roe versus Wade,” but “Governor Pence wants to repeal Roe versus Wade.”

“He said he wants to put it on the ash heap of history,” complained the Virginia senator.

During the presidential campaign, candidates Kaine and Clinton made it clear they were happy to toss marriage, gender, and religious liberty into the ash heap of history.

Here is the full text of the Virginia bishops’ statement on U.S. Senate’s failure to pass the Born-Alive Abortion Survivors Protection Act:

We are deeply dismayed and astounded that the U.S. Senate has failed to pass the Born-Alive Abortion Survivors Protection Act (S. 311). It is a matter of common sense and basic human decency to require, as S. 311 would have, that any health care practitioner present when a child is born alive following an abortion give the same degree of care to preserve the life and health of the child as would be given to any other newborn. That this bill did not pass unanimously – let alone even pass at all – is appalling and beyond comprehension. We are dismayed and outraged that Virginia’s U.S. Senators Warner and Kaine voted against this critical lifesaving legislation.

We urge the Senate to reconsider its decision as soon as possible.

The final tally of the vote revealed that nine Catholic members of the U.S. Senate – all Democrats – voted against the measure, as did six senators vying to be the 2020 Democratic presidential nominee: Elizabeth Warren, Bernie Sanders, Kirsten Gillibrand, Kamala Harris, Amy Klobuchar, and Cory Booker.