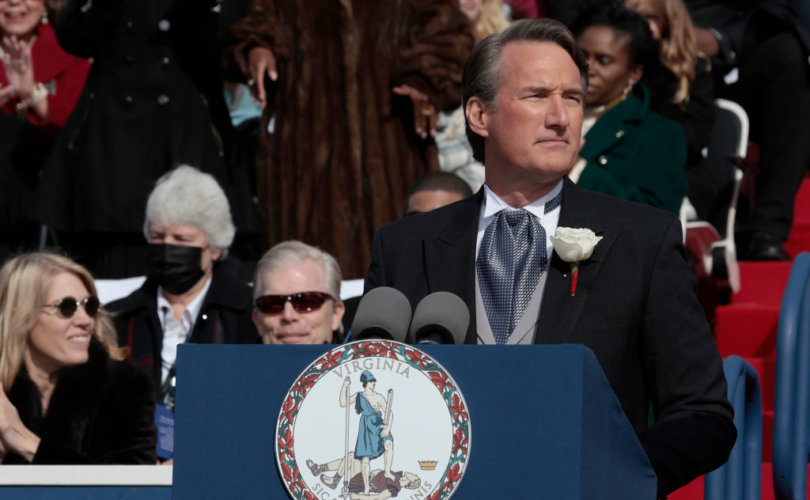 (LifeSiteNews) — This week, Virginia bishops released a message to Catholics in the state calling on them to show support for the actions taken by Gov. Glenn Youngkin to protect parental rights in education.

The Virginia Catholic Conference (VCC), which addresses issues of public policy within the state, invited people to submit public comments to the state’s Regulatory Town Hall expressing their support for the 2022 model policies. The new guidelines will require students to use pronouns and bathrooms as well as participate in sports that align with their biological sex.

“Parents are the first teachers of their children and have an irreplaceable role in guiding them and ensuring their well-being,” the VCC wrote. “If you have not already done so, express your support for restoring the role of parents in public education.”

The VCC explained that the policies “uphold parents’ God-given and constitutional right to guide their child’s development. They also protect the First Amendment rights of students and staff.”

A 30-day public comment period will end October 26, at which time the policies may go into effect. Yesterday, the Virginia Board of Education hosted a public meeting and “took over two hours of testimony on the proposed changes.”

The VCC also suggested reasons to include in statements of support, such as highlighting how the new policies “honor the sacred role of parents” in every aspect of their children’s lives and “protect the fundamental religious liberty interests of personnel and students.” Other recommendations include the importance of parental guidance “if children are struggling with gender dysphoria” and how “student participation in sex-specific athletics, school activities and events should be determined by sex.” The VCC emphasized that bathrooms and other facilities should also be separated by biological sex.

Comments can be submitted on the state’s Regulatory Town Hall website until 11:59 p.m. October 26.

So far, over “60,000 comments have been submitted online,” and the reactions include both strong support and strong opposition.

“This bill will harm so many trans and non-binary kids,” one comment from this morning reads. “Anyone who supports this is to blame for trans kids being abused and abandoned by their families.”

Another anonymous responder wrote, “Students should have the right to use any pronouns they would like. If they don’t get this option, they may feel like their opinion isn’t important … Students are supposed to feel supported in school, but if they don’t get to choose how they identify, they aren’t being supported. What Glenn Youngkin said isn’t okay.”

“No public school should ever hide anything from parents about their children and the schools should not have to bear the burden of these actions or ‘hide’ this lifestyle action from them,” a supporter wrote. “When children eventually become ADULTS they have their entire lives to live whatever lifestyle they choose. Until then, in public schools, parents should always, ALWAYS be kept informed and the children should not be making the rules.”

Another supporter wrote that “the LCPS [Loudoun County Public Schools] child grooming agenda is truly scary. They want to keep parents in the dark while the staff (teachers and counselors) counsels our children regarding their sexuality. You see how well that is working out.”

Youngkin, who campaigned largely on the issue of parental rights in education, began fulfilling promises to voters just days after he became governor. In January, he banned the teaching of critical race theory (CRT) in public schools and ordered an investigation into the allegations that the Loudoun County School District was covering up cases of a biological “gender fluid” boy raping girls in female bathrooms.

In August, the Virginia Department of Education (VDOE) finalized policies to ensure transparency for the sexual content of public-school materials. More recently, Youngkin’s team condemned the near reintroduction of a bill that would have criminalized parents for refusing to “affirm” their children’s gender confusion.