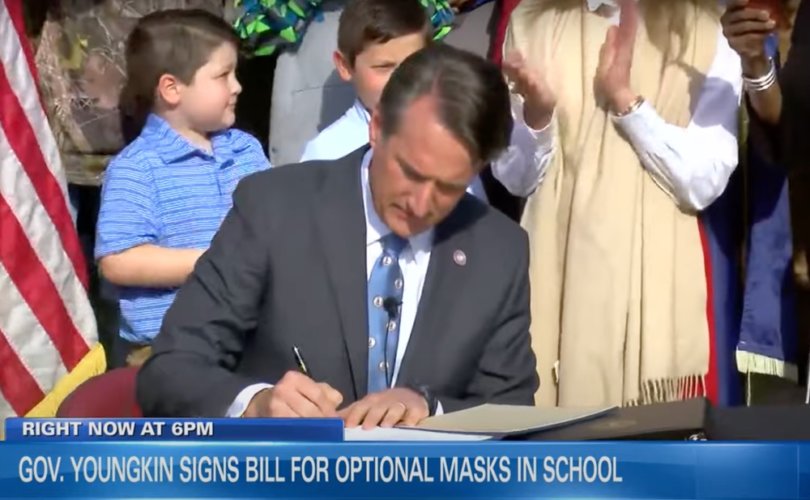 The legislation marks a crucial victory for Youngkin, who won his 2021 gubernatorial campaign partly by prioritizing school issues like masking which had become a major flashpoint for parents.

“It is my distinct privilege and honor to be able to sign Senate Bill 739 into law in the Commonwealth of Virginia,” Youngkin said during the signing ceremony February 16.

After signing the bill, Youngkin handed the pen to a 10-year-old Fairfax County girl who had been suspended nine times for refusing to wear a mask in class.

The new legislation will enshrine into law the right of parents over school officials to decide whether or not children must wear masks in school.

Local news outlet WTOP reported that while “[u]nder regular rules, the bill wouldn’t go into effect until July 1,” following the passage of an amendment forwarded by Youngkin and approved by the General Assembly, the law will take effect immediately.

Virginia school districts will have until March 1 to comply with the new legislation.

The governor’s sign-off comes after the Virginia Senate approved the bill in a bipartisan effort late last week. On Monday the legislation was given the green light in a party-line vote by the Republican-dominated House of Delegates, and then swiftly sent to Gov. Youngkin for his signature.

Author and commentator Tim Young reacted to the news by asserting that Virginia’s newly-elected Republican governor “wasted no time giving sane parents exactly what they voted for.”

Youngkin signed the bill to ban school mask mandates in Virginia today… he wasted no time giving sane parents exactly what they voted for.

On February 9, after the Senate approved the bill banning mask mandates, Youngkin said he had “promised that as governor, Virginia would move forward with an agenda that empowers parents on the upbringing, education, and care of their own children.”