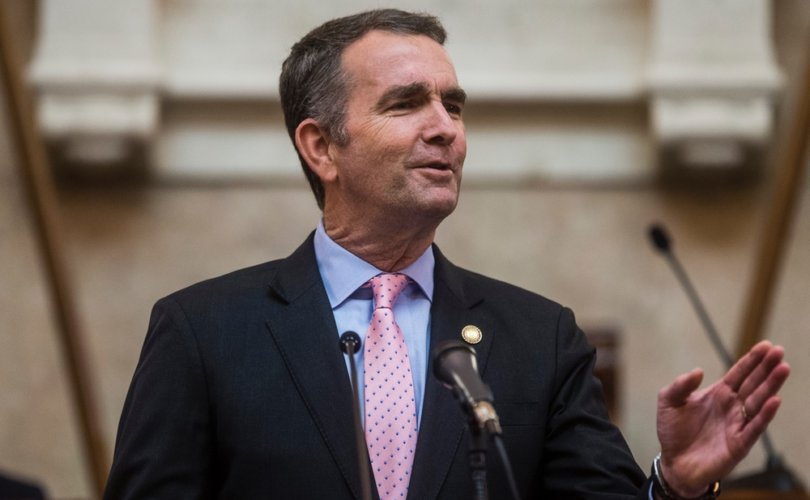 RICHMOND, Virginia, March 5, 2020 (LifeSiteNews) – Virginia Governor Ralph Northam has signed a bill into law that prevents parents from seeking counseling for their children who are experiencing unwanted same-sex attractions or gender confusion.

House Bill 386 prohibits what it calls “conversion therapy” of people under 18 years of age.

The term “conversion therapy” is defined as “any practice or treatment that seeks to change an individual’s sexual orientation or gender identity, including efforts to change behaviors or gender expressions or to eliminate or reduce sexual or romantic attractions or feelings toward individuals of the same gender.”

At the same time, the new law does not cover “counseling that provides acceptance, support, and understanding of a person or facilitates a person’s coping, social support, and identity exploration and development, including sexual-orientation-neutral interventions to prevent or address unlawful conduct or unsafe sexual practices, as long as such counseling does not seek to change an individual’s sexual orientation or gender identity.”

What does that mean? The Family Foundation, a Virginia pro-family organization, explained the bill before it was passed as allowing “licensed professionals to provide ‘acceptance, support, and understanding’ to a minor undergoing ‘gender transition’ or exploring unnatural sexual desires.”

“That’s right – a counselor could encourage a young boy to ‘transition’ into a girl, but would be prohibited by law from helping that same boy understand and affirm his identity as a boy!” the organization wrote.

Not complying with this law could lead counselors to lose their licenses. This also would affect Christian pastors who are licensed counselors.

Governor Northam said in a statement that “conversion therapy” would send a “harmful message” to a child or adolescent, indicating “that there is something wrong with who you are.”

Pro-family and parental rights advocates argue that those who tell children they were somehow “born in the wrong body” are the ones actually sending the message “that there is something wrong with who you are.”

“This discriminatory practice has been widely discredited in studies and can have lasting effects on our youth, putting them at a greater risk of depression and suicide,” Northam claimed. “No one should be made to feel they are not okay the way they are—especially not a child. I’m proud to sign this ban into law.”

As a matter of fact, the best studies show the worst outcomes for people who medically “transition” to be a member of the opposite sex. Medical “transition” includes the removal of healthy reproductive organs, chemical castration via cross-sex hormones, and mutiliating surgeries that attempt to make one look more like a member of the opposite sex.

An analysis of the best and longest studies, published by The Public Discourse, came to the conclusion that “the medical literature throws up enormous warning signs, and adults are not the only ones who will pay the price for not heeding them.”

“A pattern begins to emerge as we survey some of the best and longest outcome studies on transition—the longer the studies, and the better the methods, the more negative the results,” Paul Dirks, the author of the piece, pointed out.

Dirks went on to raise a number of questions. However, few answers can be given, since only a small number of studies have been done so far.

Last December, LifeSiteNews reported on the world’s first gender detransition conference. The conference took place in Manchester, England, and featured women who had lived as men for a significant part of their lives.

One detransitioner asked, “How can I possibly be loving myself if I am sacrificing my general health in order to change my whole being?” In an attempt to become a man, she had both breasts removed.

One of the experts who spoke at the conference was David Bell, the former president of the British Psychoanalytic Society.

Bell said he doesn’t believe that gender “reassignment” clinics do follow-up checks on their patients. He also remarked that the term “puberty blockers” for the powerful drugs given to children to delay the onset of puberty is “misleading.” Bell believes that the drugs probably have physiological consequences beyond delaying puberty.

Like Paul Dirks in his article for The Public Discourse, Bell lamented “the lack of long term evidence” in the field of people attempting gender “transitions.”

For the first time in 26 years, Democrats control both legislative chambers and the governorship in Virginia, and they have promised to pass a number of anti-religious liberty, pro-LGBT, and pro-abortion measures.