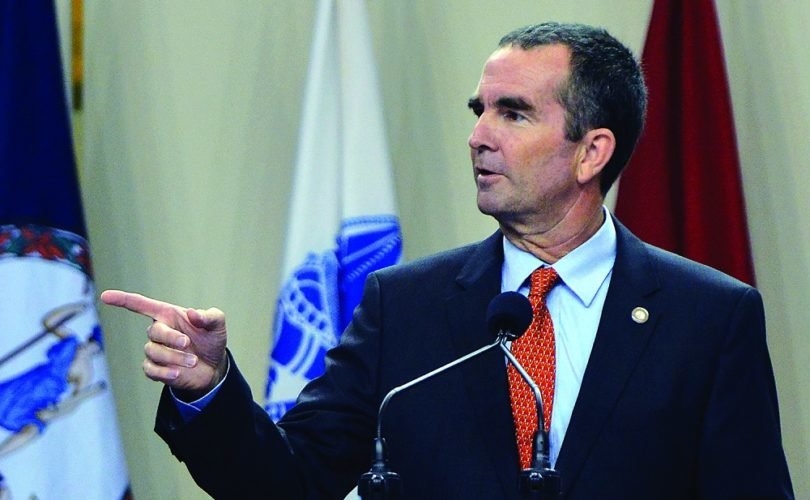 VIRGINIA, January 30, 2019 (LifeSiteNews) – Virginia Gov. Ralph Northam, who this morning said a bill allowing abortion up until the moment of birth would also allow doctors to refuse to resuscitate an infant born alive after a failed abortion “if that’s what the mother and the family desire,” called it “shameful and disgusting” to say he hasn’t “devoted” his “life to caring for children.”

Northam, a Democrat and former pediatric neurologist, was interviewed about fellow Democrat Delegate Kathy Tran’s now-failed proposed abortion bill, which Tran admitted would allow abortions at 40 weeks of pregnancy and even as a mother is going into labor.

“I have devoted my life to caring for children and any insinuation otherwise is shameful and disgusting,” Northam tweeted this evening, in an apparent response to the widespread criticism and backlash he has faced for his pro-infanticide comments.

While campaigning to be elected governor, Northam made a campaign stop at an Alexandria, Virginia abortion facility.

Tonight, President Trump weighed in on Northam’s and Tran’s remarks.

Trump was referencing his now completely vindicated statement during the third presidential debate, when he noted, “If you go with what Hillary is saying, in the ninth month, you can take the baby and rip the baby out of the womb of the mother just prior to the birth of the baby.”

“Is there no limit to the depth of cruelty and depravity that some of our elected officials will sink to?” Olivia Gans Turner, President of the Virginia Society for Human Life, asked in an email to supporters Wednesday. “The new ethos of the pro-abortion lobby is go all in for every abortion, even at nine months of pregnancy and strip the states of any pro-life laws on the books.”

“Following on the heels of New York’s radical expansion of abortion on demand, Delegate Tran’s bill reveals with alarming clarity what the modern Democratic Party stands for and their agenda for our nation – abortion on demand, up until the moment of delivery and even beyond,” said Marjorie Dannenfelser, President of the Susan B. Anthony List. Her group announced today it’s launching a six-figure campaign to defeat abortion extremists in the upcoming Virginia elections this fall.

“The difference between the two sides of the House of Delegates is very clear,” Gans Turner concluded. “There are far too many pro-abortion Delegates ready and willing to do the bidding of the abortion industry at the expense of the women and unborn children of Virginia. We must not look away. Virginians must decide the direction we shall go, and it must not be in the wake of New York!”