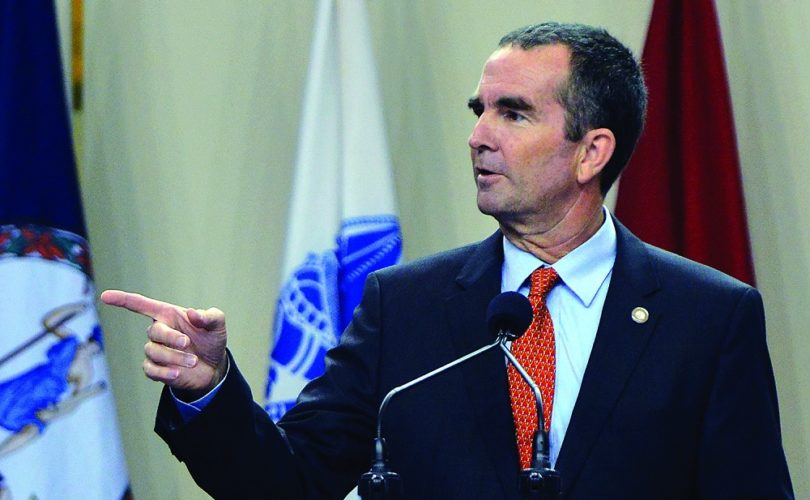 August 30, 2019 (LifeSiteNews) — Virginia governor Ralph Northam refuses to admit that his appointing a Democratic activist responsible for anti-Catholic tweets to a state-level advisory council was a mistake. Nor will he apologize.

Northam confirmed for reporters Thursday he did not ask his Virginia Council on Women appointee, Gail Gordon Donegan, to resign after it was learned that on social media she’d derided Catholics as pedophiles, bashed Church teaching on abortion, and ridiculed Catholic tradition.

Pressed on the matter by reporters at a press conference for Virginia’s plan to replace its diesel-fueled school buses with electric buses, Virginia’s Democratic governor declined to condemn Donegan’s remarks outright, concede her appointment was a mistake, confirm whether he knew about her anti-Catholic and Republican-disparaging comments ahead of time, or address the anti-Catholic nature of what Donegan had said.

“I just wanted to reiterate that I don’t condone that kind of language and if she had chosen to stay on the commission I would have encouraged her to refrain from any type of language that would be offensive to other folks,” he said.

Asked if he believed that her appointment to be a misstep, Northam refused to respond, stating, “I don’t have any other comment on that.”

.@GovernorVA ‘s Virginia Council on Women appointee resigned Tues. because of derogatory comments about #Catholics she made on social media. Asked if he requested Gail Gordon Donegan to resign, #Northam stops short of condemning her behavior,here at an #electricschoolbuses event: pic.twitter.com/crcLBJr7BH

Donegan has made numerous anti-Catholic comments on Twitter over the years.

Among them, “Abortion is morally indefensible to Catholic priests bcuz it results in fewer children to rape.”

On Ash Wednesday in 2011, Donegan tweeted, “Go tell a Catholic they have dirt on their forehead,” followed by the hashtag “#waystooffend.”

Also in 2010, Donegan retweeted a tweet that said Christmas is “the one time of year the Catholic Church is allowed to focus on a little boy.”

Donegan has also made numerous other profanity-laced and offensive statements and attacks on other people and groups on Twitter.

“Her statements are offensive to Catholics and our faith”

Virginia’s two Catholic bishops, Bishop Michael Burbidge of the Diocese of Arlington and Bishop Barry Knestout of the Diocese of Richmond, jointly called for Northam to rescind Donegan’s appointment in an August 27 statement, CNS News reports.

“Ms. Gordon Donegan has demonstrated a pattern of ridiculing Catholic beliefs and employing stereotypes designed to malign people of faith,” the statement said. “Had these comments been directed toward any other group of persons, they would have disqualified her from this role.”

And the Virginia Catholic Conference had issued an action alert asking Catholics and others to join the Virginia bishops in calling on the governor “to rescind this troubling appointment.”

“We expect anyone appointed to a council, board or commission for the Commonwealth to be respectful of all faith groups and civil in his or her public comments,” Bishop Burbidge said. “Her statements are offensive to Catholics and our faith.”

The Catholic League for Religious and Civil Rights had also called upon Northam to withdraw the appointment in a statement.

“Gail Gordon Donegan is a local political activist. She is also a vicious anti-Catholic bigot. Now, thanks to Gov. Ralph Northam, she is an appointee to the Virginia Council on Women,” it said. “It is an appointment the governor must withdraw — at once!”

Ashley McGuire, a senior fellow with The Catholic Association, concurred.

“Virginia Governor Ralph Northam's appointment of an anti-Catholic activist to the state council on women’s issues is the most recent and blatant example of bigotry emanating from the Democratic party’s leadership,” McGuire said. “We call on Governor Northam to withdraw the appointment and apologize to the Catholic community for the insult it represents.”

When asked by the Richmond Times-Dispatch whether Northam still believes that Donegan is the most qualified person for the Virginia Council on Women appointment, spokeswoman Alena Yarmosky declined to answer. She did, however, declare that Donegan “has spent years advocating on behalf of issues important to women across the Commonwealth[.] … The governor certainly does not condone this language.”

Prior to her Tuesday resignation, Donegan defended her social media posts to the Times-Dispatch on the phone last week.

Donegan then stated, “My husband is an ex-Catholic and he’s not offended by my tweets.”