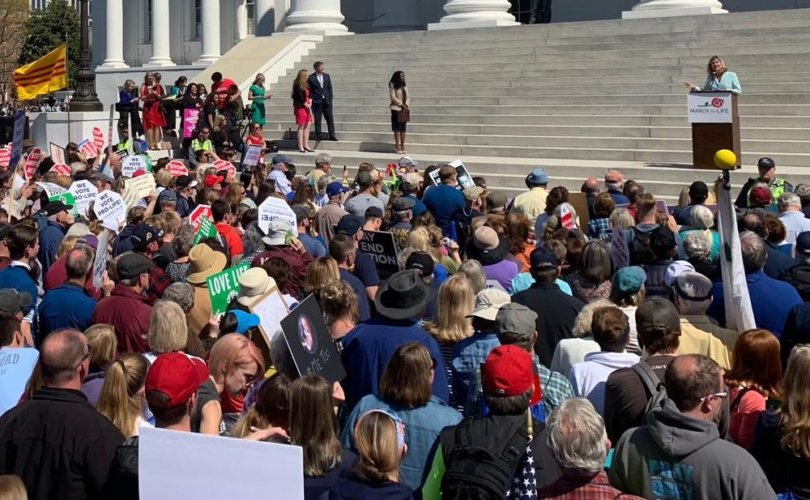 RICHMOND, Virginia, April 4, 2019 (LifeSiteNews) – The abortion lobby suffered a defeat in Virginia on Wednesday when the state House rejected a proposal by embattled Democrat Gov. Ralph Northam to cut budget language that prevents taxpayers from having to fund abortions.

During an eight-hour legislative session yesterday, Republican lawmakers voted down a number of budget recommendations that Northam proposed on a variety of issues, the Virginia Mercury reported. Among them was an amendment that would have removed current budget language preventing tax dollars from funding abortions unless specifically required by federal law (i.e., for rape, incest, or to save a mother’s life). The amendment died after a 45-50 vote.

According to the Family Foundation of Virginia (FFV), the budget language that Republicans successfully defended also limits a state program to fund long-acting reversible contraception (LARC) so that it only covers devices purchased by the state Department of Health and not Planned Parenthood; and a requirement that the Department of Health create monthly reports on the number and details of taxpayer-funded abortions it approved for “fetal abnormalities.”

However, the final provision was also rendered unnecessary as the aforementioned funding ban survived, meaning “fetal abnormality” abortions will no longer be subsidized at all.

“This is a huge win for the protection of unborn life and a great end to a day that began with Virginia's first-ever (and highly successful) statewide March For Life at the Capitol,” FFV declared, while noting that “there is still one more round left to go in the budget process. It will now be sent back to the governor, who will have a final veto opportunity.”

The vote coincided with a March for Life at the state capital that was estimated to attract as many as 6,500 people, WTVR reported.

The event was the latest and largest protest against Northam’s January defense of a since-tabled bill that would have allowed abortions up to birth. In cases of “severe deformities” or a “nonviable” baby, he said, a born-alive infant would be “delivered,” “kept comfortable,” but after that the child would “be resuscitated if that’s what the mother and the family desired, and then a discussion would ensue between the physicians and the mother.” He later said he had no regrets about his words.

Townhall reported that one of the rally speakers, pro-life activist and abortion survivor Melissa Ohden, detailed how she was rescued by a nurse who was “unwilling to just leave me to die despite the demands to do so (…) Is this what this looks like to be comfortable? I would love an answer to that question.”

Another speaker, Republican state Sen. Bill Stanley, opened up about how he and his wife refused to abort their daughter born at 24 weeks, who “fought for 3 1/2 hours for life and she passed in our arms and we named her Grace because God had given us this grace.”

“My hope and my prayer is that the legislators see that the people of Virginia love babies and don't love murder,” attendee and youth pastor David Pinkham told WTVR, that “the ones that are pro-choice or pro-abortion would change their minds.”

The Virginia bill that Northam defended was one of several radical pro-abortion bills recently pushed in several states, most notably New York, that inspired national Republicans to reintroduce anti-infanticide legislation and has been credited with a sudden 10-point spike in pro-life public opinion in February.

On Saturday, Virginia will see another protest of Northam and his pro-abortion allies in the form of a Day of Mourning. A large worship and prayer gathering will take place at the Greater Richmond Convention Center, and organizers are asking Americans across the country to wear black, fast, pray, and repent for the sin of abortion.