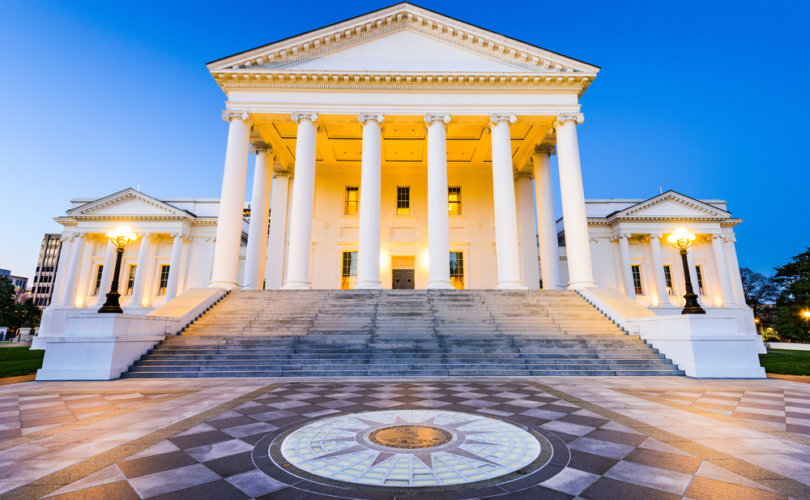 RICHMOND, Virginia, January 30, 2020 (LifeSiteNews) – On the heels of passing sweeping legislation to repeal the state’s abortion restrictions, Virginia lawmakers are also pushing a wide slate of measures to advance the homosexual and transgender agendas in discrimination, education and more at the expense of religious liberty and conscience rights.

Earlier this week, the Virginia House and Senate both voted to pass the so-called Reproductive Health Protection Act, which would empower various non-physician health workers to commit first-trimester abortions, repeal the 24-hour waiting period for abortion, and eliminate the requirements that a woman seeking an abortion undergo counseling and be offered the chance to see an ultrasound of her baby.

Differences between the House and Senate versions of the bill need to be ironed out before the final version is sent to the governor’s desk, but Democrat Ralph Northam is expected to sign it into law.

Left-wing lawmakers across the country have been working to revive the ERA, and the U.S. House Judiciary Committee voted in November to retroactively lift its deadline for ratification. But the Trump Justice Department’s Office of Legal Counsel issued an opinion earlier this month declaring their efforts invalid, because the deadlines from its original introduction have long since expired.

In order to legitimately ratify the ERA, it advised, either supporters would have to pursue a new “convention sought by two-thirds of the state legislatures,” or Congress would have to “propose that amendment once more” and approve it with “two-thirds of both Houses” (as outlined in Article V of the U.S. Constitution), at which point states would have to take all-new ratification votes.

Additionally, the Family Foundation details an alarming list of pro-LGBT policies to advance through the state legislature just last week. The measures include a repeal of the state’s unenforced, pre-Obergefell statute prohibiting same-sex “marriage,” a ban on counseling minors to help them overcome unwanted same-sex attraction, adding “sexual orientation” and “gender identity” to state nondiscrimination rules, the ability to easily change the sex listed on their official birth certificate, a mandate that health insurance cover sex-reassignment surgery, the creation of a new model curriculum on “social justice,” legislation mandating transgender access to opposite-sex facilities, recognition of “preferred” pronouns, gender-confused boys’ participation in girls’ sports, and more.

Several pro-life and pro-family bills were also defeated in the same time period, including a ban on abortion at 20 weeks, a bill to ensure that parents have to opt their child into sex education courses instead of having to opt them out, and a bill protecting the right of counselors to merely talk to minors about overcoming unwanted sexual attraction.

“It’s clear by now that the radical Left is bent on ridding Virginia of any common sense laws that protect the sanctity of life, religious liberty and traditional family values,” Family Foundation president Victoria Cobb lamented. “Everything imaginable – and beyond imaginable – is being thrown at us and foisted upon our Commonwealth.”

Virginia has gained national notoriety for its far-left turn after Democrats’ November 2019 takeover of both chambers of the legislature. For almost a full year beforehand, Gov. Northam had been a lightning rod for criticism for defending the prospect of letting a doctor and family decide to let die a fully-delivered newborn that was deemed to be “nonviable” or have “severe deformities.”