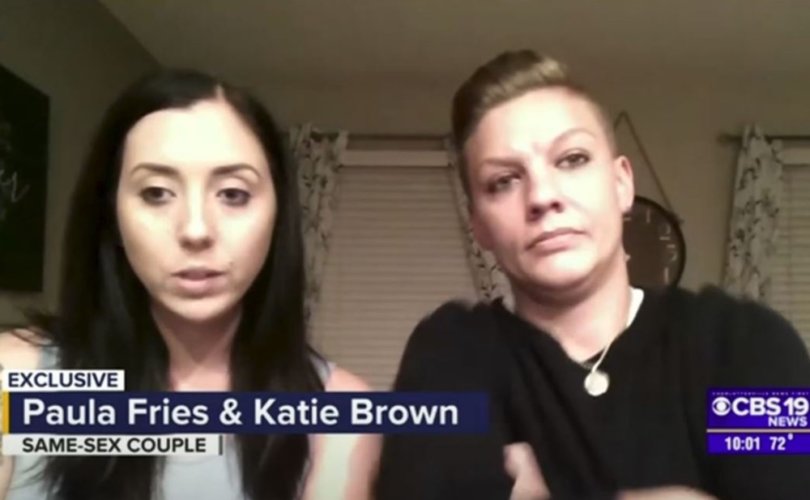 Paula Fries and Katie Brown went on the attack after Gardenia Weddings declined to do their wedding photography.Screenshot / CBS19 News

CHARLOTTESVILLE, Virginia, July 24, 2018 (LifeSiteNews) — A lesbian couple from northern Virginia claims that a Charlottesville wedding cinematography business discriminated against them by refusing to shoot their “wedding,” despite allegedly claiming they were willing to in an earlier correspondence.

Gardenia Weddings is the business of married couple Alex and Brett Sandridge, who capture films and photos for weddings in the area. Paula Fries and Katie Brown wanted to hire them for their same-sex “wedding,” but claim they pulled out just before signing a contract.

Fries told CBS 19 she made sure to include in her earliest messages the fact that they were a same-sex couple, as she does with every wedding vendor. Gardenia initially signaled their willingness and enthusiasm to serve them, to the point of sending the couple a contract and an invoice for a $625 down payment.

CBS 19 shared several screenshots of the correspondences in its video report, which appear to confirm Gardenia was initially willing to perform the wedding. However, shortly after sending the contract, the business sent a final email respectfully telling Fries and Brown they could not serve their “wedding” after all.

“After much discussion with my wife (and co-owner) this evening we have decided we would not be the best match to film your wedding,” Brett Sandridge wrote in the email, which Fries shared on Facebook. “We are just really wanting to stay true to our beliefs and hope that you can respect that.”

Sandridge expressed sympathy over the couple’s anticipated disappointment at the news and offered to pass their wedding date to other local videographers to help them find a replacement. Yet the two were more than disappointed.

“It felt like the rug was pulled out from under us,” Brown said. “As soon as they sent the contract and PayPal invoice, we closed out communication channels with everyone else.”

The Media Research Center notes that Fries’ posting of the email contained the business’ website, email address, and phone number, resulting in a torrent of hostile social media comments that forced Gardenia to shut down its Facebook page.

The lesbian couple admits their discussions with Gardenia never led to a legally-binding agreement, and has not indicated any intention to take legal action on “discrimination” grounds, yet they claim the incident was a sign of LGBT “oppression” just the same.

“It makes me so sad and it does feel like we are not on equal footing with heterosexual couples,” Brown claimed. “For those who say religion is a reason for why they discriminate and oppress a certain subset of people, is that really a good belief system to begin with.”

Even so, Fries inadvertently admitted that they ultimately came out ahead by attempting to publicly shame Gardenia, with the “outpouring” of support they received including “people offering to do our video services for free.”

Gardenia is the latest in a series of small businesses to be publicly attacked for respectfully declining to service events endorsing homosexuality. Colorado baker Jack Phillips’ Supreme Court victory in June was widely hailed as a victory for religious liberty, though with outgoing Justice Anthony Kennedy’s majority opinion being cited by both supporters and opponents of the businesses, the final legal outcome remains an open question.