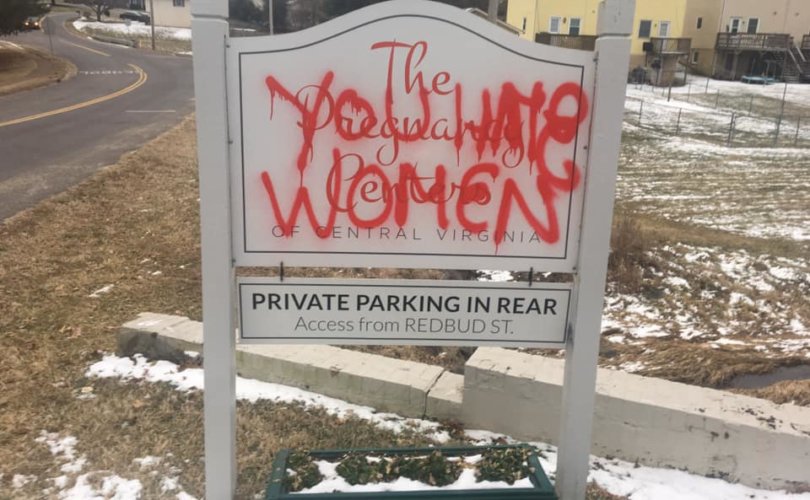 “You hate women” and “Jesus hates this [vulgarity deleted]” along with “FAKE” in big black letters were scrawled on the outside of the small office on Sunset Lane, right next to the Culpeper Hospital and across the street from Farmington Elementary School. A front window was smashed in and one of the center signs covered with red paint and a sad face drawn underneath it.

A trio of investigators from the Culpeper Police Department was on the scene Friday morning measuring footprints in the snow and canvassing the neighborhood to learn more about who did it. Investigator Norma McGuckin confirmed the police department was trying to figure out when the vandalism happened.

The Pregnancy Centers of Central Virginia (which is changing its name to Thrive Women's Healthcare) has served over 24,000 women since its first location opened in 1984. Its services include pregnancy testing and verification, confidential options counseling, abortion information, ultrasound, community referrals and resources, pregnancy support, and post-abortion care and support.

Lindy Dimeo, director and patient advocate coordinator for the center, organized cleanup Friday morning. Throughout the day, she witnessed an outpouring of support from the community.

“We already had a client come by this morning just to give me a hug. And to say she's here for us and what she can do to help,” she told the Culpeper Star-Exponent.

According to Dimeo, someone from the nearby hospital saw the damage and called police around 3:30 a.m. Friday.

“It makes me sad. I'm not angry; it's just sad because none of it is true,” said Dimeo, who started the Culpeper center 20 years ago. “We're not a fake clinic, we have a doctor on staff; we have sonographer on staff. We do ultrasounds, STD testing, pregnancy testing.

“We're HIPAA compliant, so we meet all regulations. We are part of a financial accountability organization. All of our services are to help women who are facing pregnancy, unplanned or not with material assistance up to 2 years old and with medically accurate information on all of their options. We are not here to tell them what to do.”

The accusation that the center is a “fake” clinic echoes claims made by NARAL, Planned Parenthood, and other pro-abortion groups over the years. Such smears have led to multiple legislative attacks across the U.S., including a California law mandating that pregnancy help centers tell women where they can find an abortion. Although the Supreme Court struck down that law last summer, pro-abortion politicians continue to push similar measures in cities and states around the country.

Now, as New York, Virginia, and other states work to expand late-term abortion, the outreach performed by life-affirming pregnancy help centers is all the more necessary.

“There's a reality that we can't forget and that's the fact that pregnancy help still matters,” said Jor-El Godsey, president of Heartbeat International, a worldwide network of more than 2,600 pregnancy help organizations. “The on-the-ground, practical work that's going on in pregnancy centers, maternity homes, and call centers like Option Line is the vital response the pro-life community needs to rally behind right now. This is the work that empowers women and saves lives.”

As the investigation of what transpired in Culpeper continues, Police Chief Chris Jenkins is urging anyone with information to come forward.

“We encourage anyone who may have been in the area or noticed anything suspicious last night to reach out to our detectives to assist with bringing the person(s) responsible for this crime to justice,” he said.