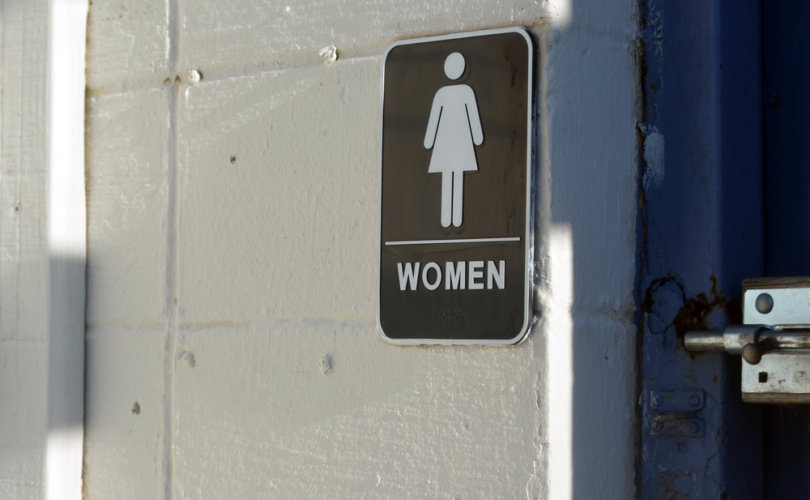 COUNTY, Virginia (LifeSiteNews) – A Virginia father, arrested at a Loudoun County Public Schools (LCPS) board meeting in June for protesting “transgender” policy proposals, says the school system was covering up sexual abuse of his teenage daughter in a school bathroom by a boy wearing a skirt.

On June 22 at a LCPS board meeting, hundreds of parents protested the proposed introduction of Critical Race Theory (CRT) being taught in classrooms as well as the implementation of additional measures such as special bathrooms for “transgender” students.

However, after parents continued to argue against the proposals, LCPS superintendent Scott Ziegler said students at the school had never suffered any kind of attack involving a “transgender” student in a bathroom: “To my knowledge, we don’t have any record of assaults occurring in our restrooms,” he said.

Scott Smith then attempted to tell the board that his daughter, who was in ninth grade at Stone Bridge High School, had been sexually assaulted by a boy wearing a skirt in the women’s bathroom. But the girl’s father ended up in a heated exchange with another parent over the incident before getting the chance to speak publicly. Police officers intervened, handcuffing and escorting Smith by dragging him out of the building while exposing his torso.

Smith was subsequently charged with disorderly conduct and resisting arrest.

In comments to The Daily Wire, Smith describes the events leading up to his arrest, beginning with him being called into Stone Bridge High School three months earlier, on May 28, after his daughter had been the subject of a physical assault by a boy in a school bathroom.

After arriving, Smith said he quickly realized that the incident was more serious than simply a physical attack, though the school did not tell him that it had been sexual in nature. School staff instead told Smith that there was no reason to involve the police in the matter and that it would be dealt with internally.

Aggressively challenging school officials on the decision to handle the incident themselves, the school called the police to handle Smith rather than to get involved in his daughter’s case or to speak with the suspect.

After creating a furor at the school, though, his 15-year-old daughter was admitted to a hospital, where staff “administered a rape kit that night,” Smith said. According to The Daily Wire, test results “came back favorable to the prosecution’s case,” confirming the possibility of rape and launching a police investigation.

The school’s principal wrote a letter to parents regarding Smith’s argument, which caused a scene in the school, later the same day but said nothing of his daughter’s assault in the bathroom.

After the police investigation, which concluded after the date of the June school board meeting, The Daily Wire discovered that the teenage suspect had been arrested in connection with Smith’s daughter on charges of “forcible sodomy [and] sexual battery.”

Given their daughter’s experience, the Smiths wished to voice their concerns about expanding “transgender” facilities in Loudoun County schools at the next board meeting, which fell on June 22.

Smith told The Daily Wire that while he and his wife are “gay- and lesbian-friendly,” they are “not into this children transgender stuff.”

He added that his daughter’s suspected assailant “is apparently bisexual and occasionally wears dresses because he likes them. So this kid is technically not what the school board was fighting about.”

Ultimately, Smith noted that children “are using it [transgender policies] as an advantage to get into the bathrooms.”

As the board meeting progressed, school board chair Brenda Sheridan asked if any incidents “involving transgender students in our bathrooms or locker rooms” had occurred.

Though Smith’s daughter had an open case against her fellow student, the superintendent responded that “the data was simply not playing out that transgender students were more likely to assault cisgender students in restrooms than were other students,” characterizing the parents’ concerns as “a red herring.”

“I think it’s important to keep our perspective on this. We’ve heard it several times tonight from our public speakers, but the predator transgender student or person simply does not exist,” Ziegler added.

The Daily Wire reported that there were several parents supporting either side of the argument for and against implementing “transgender” initiatives, with one pro-transgender speaker maligning his opponents as being filled with “hate,” which was “dripping from the followers of Jesus in this room.”

Board members had sought intervention from the police, who were present, when the meeting became loud and tempers began to rise. The board warned that the meeting would end early after parents opposed them on the issues of CRT and transgender accommodations.

Later, after a speaker berated board members for suspending one of their teaching staff after he spoke out against proposed “transgender” policies at an earlier meeting, eliciting loud cheers, the board abruptly ended the meeting.

Some parents who hadn’t yet had the chance to speak attempted to voice their concerns, at which point the board deemed the meeting an “unlawful assembly.”

Two arrests were then made, one of which was of Smith, whom the police handcuffed and dragged along the floor as they ushered him out of the building.

“If someone would have sat and listened for 30 seconds to what Scott had to say, they would have been mortified and heartbroken,” Smith’s attorney, Elizabeth Lancaster, said.

Images of Smith’s arrest were used against opponents of the transgender ideology, with the National School Boards Association using his arrest to justify using the anti-terrorism PATRIOT Act on U.S. citizens in the future.

Smith was advised to remain silent about the falsehood surrounding his arrest as it may have interfered with his daughter’s case. “It has been so hard to keep my mouth shut and wait this out. It has been the most powerless thing I’ve ever been through,” Smith said, adding that he cares not about whether the boy who assaulted his daughter is “homosexual, heterosexual, bisexual, transsexual. He’s a sexual predator.”

On October 7, just eight days before the boy was expected to appear in court pleading guilty to sexually assaulting Smith’s daughter, Loudoun County Sheriff’s Office released a press statement describing the arrest of a 15-year-old boy “charged with sexual battery and abduction of a fellow student at Broad Run High School.”

Continuing, the statement reads, “The investigation determined on the afternoon of October 6, the 15-year-old suspect forced the victim into an empty classroom where he held her against her will and inappropriately touched her.” The Daily Wire later discovered that the suspect is the same boy accused of assaulting Smith’s daughter.

The statement noted that the “suspect remains held at the Loudoun County Juvenile Detention Center.”

It is unknown why the boy was permitted back into school while the first case against him was ongoing.

“I don’t even know why he was at a school. Why was this motherf****r allowed to do this again?” Smith responded upon hearing the news.

LifeSiteNews contacted both the Loudoun County Sheriff’s Office and LCPS for comment but did not immediately receive a response.