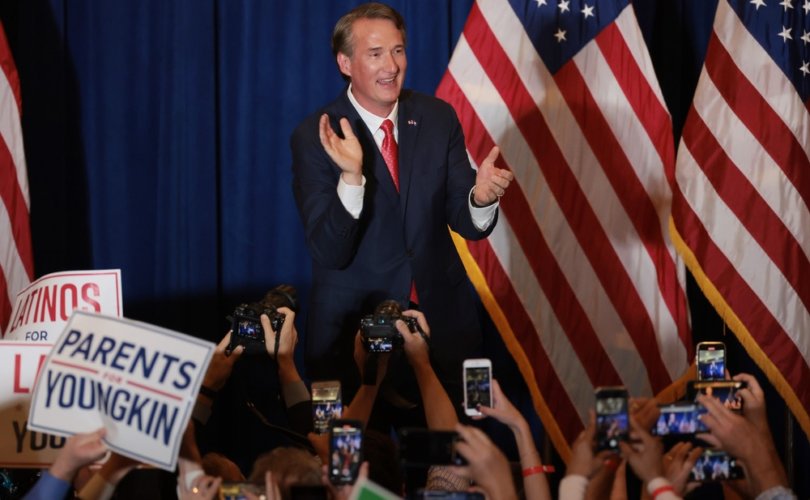 RICHMOND, Virginia (LifeSiteNews) — In a bipartisan effort last week Virginia lawmakers approved a bill to permanently protect the right of parents over school officials to decide whether or not children must wear masks in school.

Virginia’s new Gov. Glenn Youngkin, who generated widespread support for opposing forced masking during his gubernatorial campaign, is expected to sign the bill into law.

SB 739 was passed by Virginia’s Senate on Wednesday and will now be sent to the Commonwealth’s Republican-dominated House of Delegates, where it is expected to be quickly forwarded to the governor’s desk for a signature.

According to 8News, a local ABC affiliate, three Democrats voted to approve the legislation in the Senate along with the Republicans, a marked shift for Democrats who have long lobbied for universal mask mandates.

Virginia’s Republican Gov. Glenn Youngkin has clearly signaled his intention to sign the bill, which would enshrine the measure into law during the present school year.

8News reported that “Youngkin intends to add an emergency clause to the bill once it reaches his desk so it can take effect immediately,” a move which would require the sign-off of the General Assembly.

Dunnavant, a practicing OB/GYN, noted that in addition to failing to stop the spread of COVID-19, masking impairs children’s ability to engage in social interactions.

SB 739 has passed the Senate with bipartisan support! This is a big win for our kids and families! In person instruction and parental mask options are important to the well-being and development of our children. On to the House and a quick trip to the Governor’s desk! pic.twitter.com/zrzGFA68pu

Many speech therapists and other experts have pointed out that masking children severely limits their ability to develop age-appropriate speaking skills.

In January Jaclyn Theek, a clinic director and speech-language pathologist at the Speech and Learning Institute in North Palm Beach, Florida, told ABC affiliate WPBF that she saw a 364% increase in the number of referrals for children suffering from speech delays in 2021, suggesting mask-wearing may be causing unprecedented damage to healthy childhood development.

Meanwhile, the move to legislatively ban school boards from forcing children to wear masks comes after school districts throughout Virginia have openly defied the governor’s January executive order intended to ensure that decisions about masking in schools are left up to parents. School officials in some districts have punished students for coming to school without masks, segregating and suspending those who opt out of a facial covering.

Youngkin’s efforts to use his executive powers to free children from top-down school mask mandates have also faced difficulty in the courts. Last week, a judge issued an order temporarily blocking the governor’s executive order and permitting school districts in seven counties to resume enforcing their mandates.

A legislative solution to the masking controversy will defend the right of parents to make healthcare decisions for their own children against pushback from school boards and the courts.

“Kids across the Commonwealth win with this bipartisan vote today,” Youngkin said in a Twitter thread February 9. “Parents are now empowered to decide whether their children should wear a mask in schools.”

“I promised that as governor, Virginia would move forward with an agenda that empowers parents on the upbringing, education, and care of their own children,” added Youngkin, who won his 2021 campaign partly by prioritizing school issues like masking and controversial curriculum selections which had become a major flashpoint for parents.

In his statements Wednesday the governor also took a swipe at school officials who have segregated or suspended students for not wearing masks, asserting that “school boards who are attacking their own students are stunningly detached from reality.”

“It’s time to put kids first and get back to normal,” Youngkin said.

I promised that as governor, Virginia would move forward with an agenda that empowers parents on the upbringing, education, and care of their own children. I am proud to continue to deliver on that promise.

The bipartisan support for the legislative proposal banning school mask mandates in Virginia comes as the politics surrounding forced masking has begun to shift, with Democrat leaders and public health experts abruptly backing away from their support for mandates.

Last week CNN health analyst Leana Wen, a former president of abortion provider Planned Parenthood, openly supported the lifting of mask mandates in Democrat-run states, despite having called for increased mandates and an upgrade to N-95 masks in late December.

Meanwhile, many experts have argued that the science behind forced masking is flimsy.

An oft-cited CDC study conducted in Arizona which suggested that schools without mask mandates were roughly 3.5 times more likely to see a COVID outbreak has been sharply criticized for using faulty methods and failing to prove causation relative to forced masking.

Dr. Vinay Prasad, MD, MPH, a hematologist-oncologist and associate professor in the Department of Epidemiology and Biostatistics at the University of California, has argued that the Arizona study does not establish a causal relationship between mandated masking and a significant reduction in the spread of the coronavirus.

“The endpoint of the study [was] not cases attributable to school spread, but rather the number of schools with two or more cases,” Prasad said. “This weighs equally a school with four cases vs. 400 cases.”

Prasad also noted that there were “many important variables the paper did not adjust for,” such as testing rates, whether asymptomatic students were tested, what kind of masks were used, and overall compliance with the mandates.

The best thing about this story is that @TheAtlantic contacted 8 experts who looked at the CDC Director’s touted Arizona study and decided it was worthless. Literally, you could not draw any valid inference from it.

She has to know better as CDC Director. This is FRAUD.

According to the writers, the CDC-backed study, which has routinely been referenced as a justification for mask mandates, has “serious shortcomings.”

“To justify mask requirements in school at this point, health officials should be able to muster solid evidence from randomized trials of masking in children,” the authors stated.

Smelkinson, Bienen, and Noble pointed out that no such solid evidence has emerged, since “only two randomized trials have measured the impact of masks on COVID transmission,” and neither gave justification for forced masking.

“The first was conducted in Denmark in the spring of 2020 and found no significant effect of masks on reducing COVID-19 transmission,” the authors wrote. “The second is a much-covered study conducted in Bangladesh that reported that surgical masks (but not cloth) were modestly effective at reducing rates of symptomatic infection.”