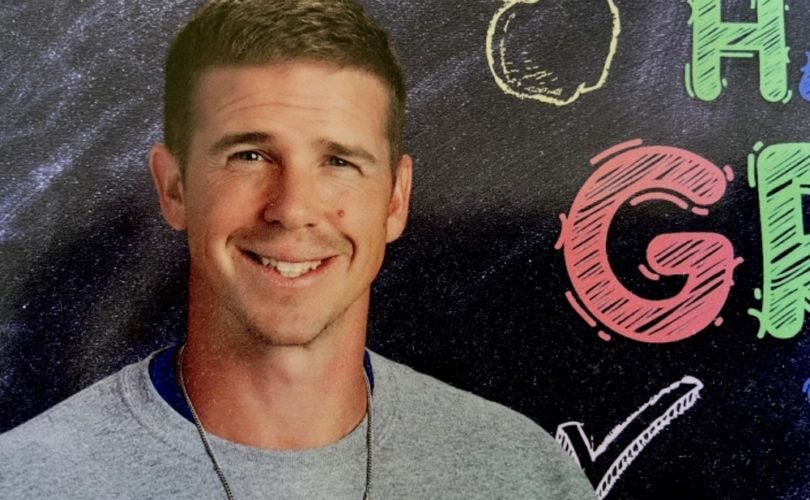 LEESBURG, Virginia (LifeSiteNews) – The embattled school board of Loudoun County, Virginia, agreed to permanently reinstate a teacher suspended for criticizing a radical transgender policy enacted by the board earlier this year.

A settlement that the school board agreed to on Monday prohibits retaliation against Byron Tanner Cross, a physical education teacher at Leesburg Elementary School. The settlement also requires the school district to remove any references to Cross’ suspension in his personnel file and pay $20,000 of his legal fees.

The Christian elementary school teacher had sued the Loudoun County school system in May after being put on administration leave for denouncing a then-proposed rule to force teachers to use transgender pronouns, among other things. Cross slammed the policy at a school board meeting that month as a violation of his religious convictions and said that it constituted “abuse to a child.”

“I will not affirm that a biological boy can be a girl and vice versa because it’s against my religion, it’s lying to a child, it’s abuse to a child and it’s sinning against our God,” Cross said at the meeting.

The transgender policy, which the Loudoun County School Board approved in a 7-2 vote in August, requires employees to refer to gender-confused students by the pronouns they request, “without any substantiating evidence” and “regardless of the name and gender recorded in the student’s permanent educational record.”

Policy 8040 also allows students to use bathrooms and other private, sex-specific spaces and compete on sports team according to their “gender identity” rather than their biological sex.

After his suspension, Cross filed a lawsuit against the school board arguing that it engaged in illegal viewpoint discrimination and violated his First Amendment right to freedom of speech. A local court reinstated Cross in June as the lawsuit played out, and the Virginia Supreme Court ruled in his favor three months ago.

“Teachers shouldn’t be forced to promote ideologies that are harmful to their students and that they believe are false, and they certainly shouldn’t be silenced from commenting at public meetings,” Cross’ attorney, Tyson Langhofer of Alliance Defending Freedom (ADF), said in a statement Monday.

“Public employees cannot be forced to contradict their core beliefs just to keep a job.”

“Our argument to the court was clear: The government has no right to force teachers to adhere to contested beliefs about human nature that they disagree with…” -ADF’s @LanghoferTyson pic.twitter.com/ufiEup6cq7

Alliance Defending Freedom is still seeking a temporary injunction to halt enforcement of Policy 8040, though the judge in the case did not rule on that request this week, ADF said. The judge signaled that he might hand down a ruling by Christmas.

Cross’ settlement comes amid new developments in the Loudoun County school district’s infamous sexual assault scandals. On Monday, a “gender-fluid” student convicted last month of raping a female classmate in the girls bathroom of a Loudoun County high school pleaded no contest to charges of sexual battery and abduction in another assault case.

Police had charged the 15-year-old boy in October with allegedly forcing a girl into a classroom and groping her at Broad Run High School, where the district transferred him after the first assault in May. The plea deal means that the teenager agreed that there is sufficient evidence to convict him but refused to admit guilt, The Washington Post reported. Sentencing decisions in both cases are expected on December 13.

Loudoun County School Board enacted Policy 8040 between the two attacks. At a June school board meeting discussing the transgender policy, school officials denied knowledge of any sexual assaults in school bathrooms, though leaked emails later revealed that board members had been informed about the bathroom rape the day that it happened.

The mother of first assault victim announced Monday that she plans to file a Title IX lawsuit against the Loudoun County School Board demanding “that no child, and no parent, will ever have to suffer what we have as a result of the misguided policies of our local government officials.”