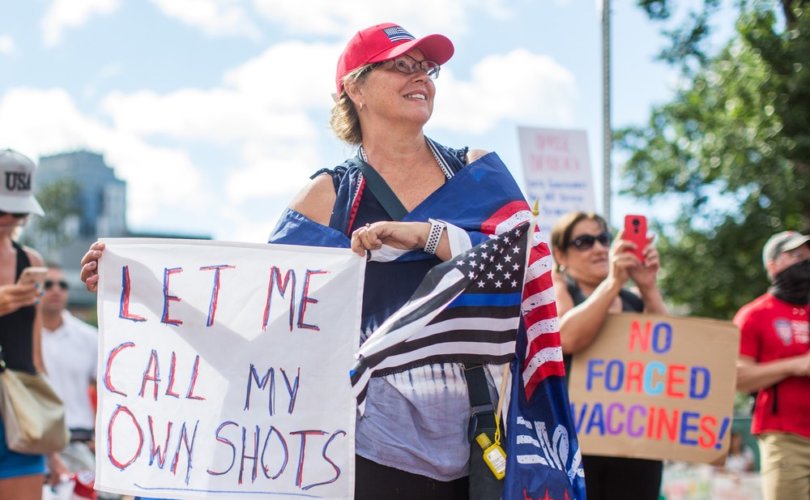 Activists opposed to a forced vaccine hold signs in front of the Massachusetts State House on August 30, 2020 in Boston, MassachusettsPhoto by Scott Eisen / Getty Images

RICHMOND, Virginia, September 1, 2020 (LifeSiteNews) – People from across Virginia are set to attend a “March Against Mandates” in the state’s capital of Richmond tomorrow, showing their opposition to forced vaccines and other mandates related to the coronavirus outbreak.

“Since March, Virginia has been operating under a state of emergency declared by the Governor,” wrote Virginia Freedom Keepers, the main organizer of the event. “The law allows for the Governor – and his appointed officials – to unilaterally mandate medical other matters without consulting the will of the people.”

“Bills to limit the Governor’s power during an emergency – both scope and time – have been ignored. Also, the Health Committee tabled bills that would have ensured Virginians[’] right to delay or decline a COVID shot despite over 12,000 [Virginians] voicing opposition. The blatant disregard for the will of the people will be addressed by our March Against Mandates.”

Virginia Health Commissioner Dr. Norman Oliver first said in August “that he plans to mandate coronavirus vaccinations for Virginians once one is made available to the public,” according to a report by a local ABC station.

The law in Virginia “gives the Commissioner of Health the authority to mandate immediate immunizations during a public health crisis if a vaccine is available,” and Oliver said he would use that power to impose a vaccination mandate.

“It is killing people now, we don’t have a treatment for it and if we develop a vaccine that can prevent it from spreading in the community we will save hundreds and hundreds of lives,” Oliver argued.

Democratic Virginia Governor Ralph Northam said through a spokeswoman a few days later that his administration had no plans to mandate a COVID-19 shot. “We are focused on accessibility, affordability, and fair distribution of a vaccine—not on a mandate.”

“When a vaccine becomes available, we’re confident that Virginians will seek it out. That’s why we don’t have plans for a mandate,” the spokeswoman said.

Health Commissioner Oliver also appeared to walk back his earlier insistence on mandating a coronavirus vaccine.

The Family Foundation, a pro-family organization based in Virginia, explained that “a Democrat-controlled House Committee” recently killed “two bills – HB 5016 (R-Cole) and HB 5070 (R-LaRock) – on a party-line vote that would’ve offered a way for someone with a sincere religious objection to be exempt from any Covid-19 vaccine mandate.”

“Not only did the committee reject legislation that would’ve provided a religious exemption, but they also shot down HB 5082 (R-LaRock),” The Family Foundation added. “This bill would’ve ensured that Virginia didn’t mandate a COVID-19 vaccine if it is derived from human fetal tissue, changes the RNA or DNA of a person, or was not first tested on laboratory animals before being tested on humans.”

“It’s extremely chilling that House Democrats are perfectly fine with mandating a vaccine with those qualities on all Virginians,” the organization commented.

Some politicians and legal scholars have argued that a vaccine mandate would likely be upheld by the Supreme Court of the United States, referring to a precedent decided in 1905. In Jacobson v. Massachusetts, the Supreme Court upheld the authority of states to enforce compulsory vaccination laws.

Robert F. Kennedy, Jr., founder of Children’s Health Defense, an organization pointing out the well-documented dangers associated with some vaccines, clarified during an online debate that the state government at the time had offered people to either be vaccinated or pay a $5 fine.

Alan Dershowitz, a Harvard law professor Kennedy was debating, countered that based on constitutional law, including this precedent, “the state has the power to literally take you to a doctor’s office and plunge a needle into your arm.” Dershowitz’s clients have included President Donald Trump and Jeffrey Epstein.

Kennedy said, “I think there’s a big constitutional chasm between, you know, that remedy, which is paying a fine, and actually going in and holding somebody down and forcibly injecting them.”

While a vaccine might not technically be mandated by any state government, it could still be effectively imposed upon people by excluding them from participating in regular life activities, unless they are vaccinated.

The University of California, a public university system with more than 280,000 students and 175,000 staff members, announced it will require all students, faculty, and staff to verify that they have been vaccinated for the flu by November 1.