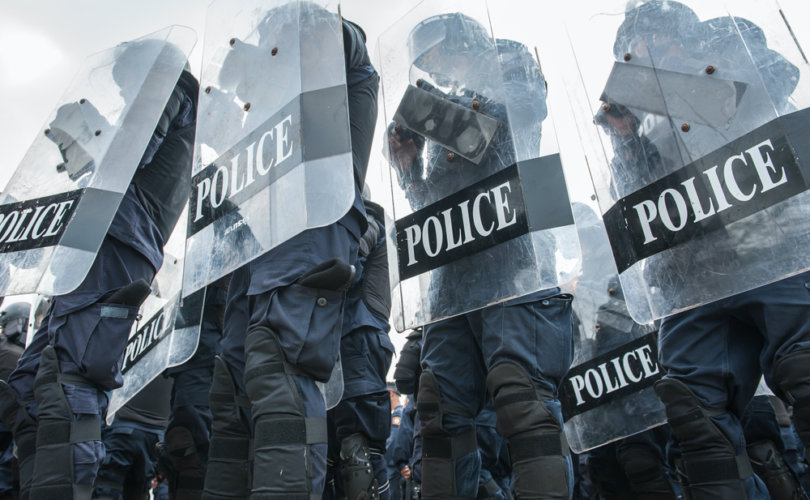 AMSTERDAM (LifeSiteNews) —Thousands of people defied a local ban on an anti-COVID demonstration on Sunday in the Dutch capital of Amsterdam and were met with heavy-handed police who brought in water cannons, horses, and dogs to disperse the crowds. According to the Dutch press, thirty arrests were made, and four law enforcement officers were injured, while alternative and foreign media underscored that an unknown number of demonstrators were hurt as the police proceeded to “empty” the Museumplein where the rally took place at the call of the “Samen voor NL,” “Together for the Netherlands,” organizers.

In one widely publicized incident a police dog was set on a demonstrator who was then thrown to the ground and beaten by the police, making the Netherlands one of the countries where brutality used against COVID narrative “dissidents” is most visible.

Another participant was bludgeoned by a police officer even though he was sitting on the ground with his hands in the air in a bid to discourage police brutality, according to a witness interviewed by NH Nieuws. The television station showed multiple images of police using water cannons against the population. It also interviewed peaceful participants who insisted they were “just decent people” who were not intent on violence. One man said that he had personally seen the police beat up a couple of peaceful elderly citizens who had joined a similar event one week ago.

At the end of November, the Dutch government imposed a four-week lockdown on its population, stretching from December 19, ten days after the present infection “wave” peaked, to January 14, forcing restaurants, cafés, and leisure facilities, as well as so-called “non-essential” shops, to close. People are required to work at home whenever possible and are not supposed to visit more than two people from a different household, and then only once a day, in a bid to slow down the spread of the current COVID variant.

The most spectacular measure is the 1.5-meter rule by which citizens are required to keep at a distance from one another. Since November 24, those who violate the 1.5-meter rule risk a 95 euro (more than $100 US) fine; before that date, this “social distancing” was merely an “urgent request.” Special public agents have been hired to roam the streets in order to check compliance with the rule.

The incidents in Amsterdam were triggered by the authorities themselves, in a manner of speaking, when the capital’s mayor, Femke Halsema, decided to prohibit the rally on the Museumplein, an immense lawn surrounded by the Van Gogh and Municipal Museums and the famed concert hall, the Concertgebouw.

The mayor was acting on “information received” that would-be demonstrators intended to carry weapons to the rally and were planning violent action. The venue was declared out of bounds for demonstrators from 11 A.M. until 11 P.M. on Sunday because of a “security risk,” and the police received the right to search everyone who entered the vicinity during that time.

The fact that over 10,000 people joined the rally, according to an official count released by the mayor, despite police warnings is surely a sign that “Operation Fear” regarding COVID is becoming less convincing. Young and old, men and women, people from all walks of life answered the call to make their opposition to the Netherlands’ COVID policies publicly clear.

— Article continues below Petition —
PETITION: Appeal to Catholic Leaders to reject abortion-tainted COVID vaccines and mandates!
Show Petition Text
12145 have signed the petition.
Let's get to 12500!
Thank you for signing this petition!
Add your signature:
Show Petition Text

Because the demonstration was illegal, the crowds claimed they were going to the Museumplein to “have coffee,” as if they were private individuals going on a picnic.

After the crowds had gathered at around 12:30, the police blocked most of the entries to the square and told the demonstrators to leave the place immediately. Some remained seated, as mentioned above, but the bulk of the crowd set off along the only free avenue, marching towards the Westerpark where the “Forum for Democracy” was holding its own anti-COVID restrictions rally.

Once they were there, the police again tried to disperse the crowds, this time on the grounds that the Forum’s meeting, which had been legally approved some days earlier, was restricted to only 2,000 participants. Together with the thousands coming from the city center, they could no longer respect the 1.5-meter rule, the police stated in an official communiqué over Sunday’s incidents.

At that point, a small part of the crowd headed back towards the Museumplein and later dispersed quietly.

But during these forced displacements, some of the demonstrators apparently showed aggression towards the police and indeed forced officers, together with their vans, to back off. Images of the incidents on social media show the crowds shouting, but it is not clear that they are violent. Reports on what triggered the tense standoffs here and there are contradictory, some laying the blame on the demonstrators, others on the police themselves, saying they attacked the crowds and provoked a violent response.

The incidents in Amsterdam are being used by mainstream media to portray anti-lockdown protesters and those opposed to sanitary passes as violent, reckless people prepared to put the “vaxxed” in danger and who will not abide by the rules.

As in many other European countries, rational analysis of the situation appears to be impossible as “infections” continue to soar, despite a high “double vaccination” rate of about 70 percent of the total population. Despite the zigzag of restrictions and the present heavy-handed approach, there were twice as many “contaminations” at the height of the Delta wave at the end of November as there were in December, with an unprecedented number—over 22,000—in a country with 17 million inhabitants.

Remarkably, the COVID story appears to be following a similar plotline in many places in the Western world: lockdowns, restrictions (often absurd and contradictory), warnings about hospital overload (as in France, the Netherlands have closed beds and ICUs since the first COVID outbreak two years ago), and the scapegoating of the unvaccinated follow each other as if a carefully thought-out scenario were playing at different speeds but with the same content.

The organizers have called for a new, nationwide, demonstration against COVID restrictions in February.